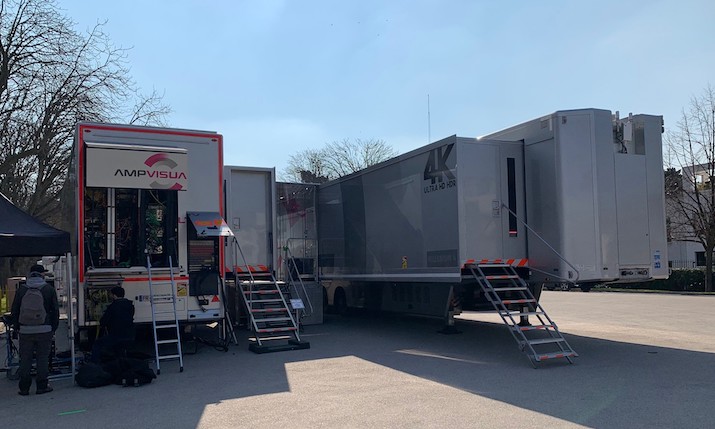 Two interconnected Millenium OB vans from AMP Visual TV have been used for the first time in France. The Millennium 3 and 4, which are designed to be assembled together to form a single large unit with additional capacity, were used by RMC Sport on the PSG versus Barcelona Champions League match at the Parc des Princes in Paris on 10 March.

The two OB vans were linked by an interconnection module which creates a work surface of more than 96sqm or two production spaces, one for the production of the international signal and one for the private signal for RMC Sport.

The combined vehicle accommodated a team of 45 people and a UHD set-up with over 30 cameras including five 180° and 360° cameras for the channel’s VR application, as well as AMP Visual’s Pelicam solution: a mini arm equipped with a slow-motion micro camera installed behind each goal.

A plug and play fibre optic interconnection makes it possible to distribute workstations easily in the extended van. Likewise, the layout has been carefully designed, deliberately separating the technical spaces from the production/editorial spaces, allowing everyone to work in comfort.

“This device embodies a project that we have had for a long time: to have technical tools that are both flexible and scalable which, through their assemblies, allow them to multiply their capacities in order to achieve very powerful set-ups,” explained François Valadoux, technical director, AMP Visual TV.