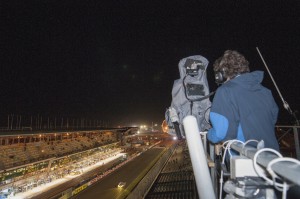 On 4 March, the Automobile Club de l’Ouest, organiser of the 24 Hours of Le Mans Race and the World Endurance Championship (WEC), announced the renewal of its TV coverage contract with AMP Visual TV for an additional three years.

The next 24 Hours of Le Mans race will take place on 13-14 June. During this edition the ACO and AMP Visual TV will be celebrating a decade of working together.

Gilles Sallé, CEO of AMP Visual TV, is obviously very pleased with the continuing collaboration with the ACO, commenting: “We are very proud to be part of such an event and it is without doubt thanks to the 24 Hours of Le Mans that we have become leading players in the world of motor sports.”

The renowned 24 Hours of Le Mans sports car endurance race is one of the most widely viewed events with close to 35 million viewers worldwide. Each year more than 250 AMP Visual TV technicians join forces to deliver high quality broadcast coverage.

By its very nature (duration, scale of the circuit, number of cars), the race requires significant technical broadcasting means to capture 24 hours of non-stop racing around a circuit of more than 13.6km, which is aired by numerous broadcasters around the world.

A total of 34 Sony HDC 1500 cameras film the entire circuit. Six compact paluche camera systems are also deployed among the grandstands. If required, certain video surveillance cameras may also be deployed. About a dozen RF on-board cameras are placed in the cars, whilst the footage is transmitted to the OB truck unit via 27 relay antennas over fibre optic cable.

Over the years, numerous innovations have served to enhance production of the 24 Hours of Le Mans, including: the migration to fibre optic connections for all the cameras on the circuit; the move from SD to HD; and an increase in the number of on-board cameras and optimisation of production means. Indeed, since 2013 AMP Visual TV’s Millenium Signature 1 and Extender 1 OB trucks have been brought together to produce the world feed. Additionally, in recent times, a second screen application has developed by Netco that utilises EVS technology.

Looking ahead to the 2015 event, AMP VISUAL TV sales manager for motorsports and RF solutions, Fabrice Miannay, comments: “For the first time this year we will have exactly the same coverage day and night. Previously, only a third of the cameras were kept rolling after sunset. The idea is to encourage countries with big time differences like the US to follow the race in real-time.”

For the next edition there will be no less than 18 cars equipped with multiple on-board cameras. Also for the first time, the video director will be able to switch between camera systems in a car without having to take an outside shot. The increase in the number of on-board cameras has been made possible with the move to MPEG-4. Previously, MPEG-2 was still being used.

Eventually, the ACO would like all 55 cars in the race to be equipped with cameras. In order to do so, onboard systems will have to evolve further to overcome RF frequency access limitations.