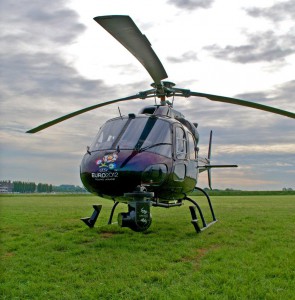 AS355 with the Cineflex camera

Aerial Camera Systems (ACS) has delivered one of its largest aerial filming projects to date providing all aerial coverage of the UEFA Euro 2012 tournament. Filming began late last year with the company’s aerial unit filming pre-event aerials of all eight host cities for the tournament, completing this element of the project in April. Working across Poland and the Ukraine, ACS crew flew over 300 flying hours providing coverage of every match during the tournament period.

Six AS355 twin engine helicopters were supplied for the project and fitted with HD Cineflex V14 stabilised camera mounts. ACS crew included the aerial unit’s award-winning operators, an aerial co-ordinator and project management team as well as experienced filming pilots. The provision cumulated in three helicopters being deployed for the final between Spain and Italy, offering live aerials of the match and surrounding area as well as the post-match celebrations.

The work follows on from ACS’ successful delivery of aerial coverage for the 2008 tournament in Austria and Switzerland.