Batcam, the provider of aerial filming services for live sports broadcasting, has become a new OB/SI sponsor at SVG Europe.

Jon Hurndall, chief executive commented: “As new sponsors, Batcam is looking forward to exploring the potential of SVG Europe events this year. Being a sponsor of SVG Europe brings us closer to industry clients and peers. We are excited to attend our first SVG Europe event, at the Football Summit in Paris on the 28 February 2019. Being an SVG Europe member will allow us to network with new clients and showcase our company on a global scale ”

Now in its fifth year of existence, Batcam provides live aerials for major broadcasters, working on over 150 events per year. That figure is set to rise to over 200 events in 2019. 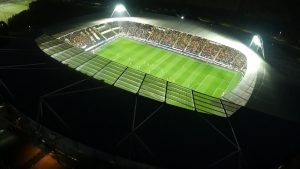 Hurndall noted: “It is this growth that has led us to explore new international events, bringing with us unique technology and broadcast know-how to our clients. We pride ourselves in always trying to push the boundaries of what is being done currently and how we can use new technology to make the content better.”

Even though Batcam products are regularly used within post-production, the bulk of its work is in live sport at events such as Premier League football, Champions League, FA Cup, cricket, rugby, athletics, motorsport and much more.

“This new system enables us to offer a state of the art lightweight alternative to some of the heavier gyro gimbals that can only be mounted on full sized helicopters,” said Hurndall.

“We are currently in the process of expanding this offering to our ad-hoc and new international clients. Stabilised shots at the end of the lens have always come at a premium in price, which is why we are particularly excited to utilise this new technology into shows across the world.”