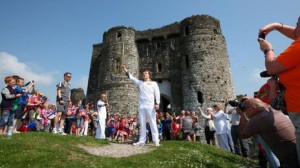 The Olympic Flame Relay is continuing its progress round the UK and the BBC is covering the massive event (the torch relay covers more than 8000 miles and will be carried by 8000 people in the UK alone) with the help of 3G transmission instead of traditional satellite or microwave systems.

TV and radio coverage of the procession, which is on the road for 12 hours a day, is provided by a media vehicle driven in front of the Torchbearer and the accompanying security team. This converted horsebox houses four remotely controlled cameras, one of which is in a gyroscopic unit mounted on the back of the van to give the main shot of the action.

Signals from the cameras are fed to a vision mixer inside the media vehicle, where they are mixed and processed ready for transmission. No satellite technology is involved, so the video pictures are relayed through eight different 3G SIM cards linked together. These search for the strongest local 3G signal and then transmit the video feed on a two-minute delay for use by both BBC TV and the BBC’s Torch Relay website.

The system is based on technology developed by Dutch company Mobile Viewpoint, a subsidiary of Internet and mobile technology developer Triple IT. The core of the installation is Mobile Viewpoint’s WMT (Wireless Multiplex Terminal), which incorporates the SIM card array. This works in conjunction with Continuous Picture Technology (CPT), which was developed with the BBC to produce a consistent, even video link for when the media vehicle is travelling through rural areas where mobile coverage is patchy.

“With the WMT it is possible to have live video connections from any place and any location as long as there is coverage of a mobile network,” comments Michel Bais, managing director of Mobile Viewpoint. “The Olympic Torch Relay project is a unique example because it shows the possibility to realise a live video connection even if there are difficult network coverage circumstances.”

Another possible tool for providing a connection in isolated areas is a remote controlled model aircraft, described by Professor Andy Keane of the University of Southampton, which developed the device, as a “radio mast in the sky.”

Audio for both out of picture TV and radio reports is also sent over a 3G link using HD Voice equipped mobile phones. HD Voice is based on adaptive multi-rate wide-band (AMR-WB) codecs delivering 7kHz or 3.5kHz audio bandwidth on 3G networks. The BBC is using two Glensound Electronics GS-MPI004HD portable HD broadcasters’ phones for sound coverage of the relay. The broadcaster also has two GS-MPI004HDs for the Olympics themselves and a GS-MPI005 HD rack mounted unit with two phone modules.

According to a BBC spokesman, HD Voice was selected because it can broadcast in “reasonable quality” from the moving media vehicle. Marc Wilson, sales and marketing manager at Glensound, adds, “HD Voice gives something that is better than standard phone connections but which is different to ISDN. It doesn’t sound like either, it’s something new.”

Early last week these technical arrangements were in jeopardy when journalists and technical staff at BBC Wales threatened to strike on May 25 and not cover the relay. Members of the National Union of Journalists and BECTU (Broadcasting, Entertainment and Cinematograph Technicians Union) voted for industrial action in protest at the sacking of BBC staff member Heidi Williams, chair of the Cardiff branch of BECTU. The walkout was called off by the unions after an agreement was reached with the BBC.

So, strike averted, Wales citizens were treated to extended coverage on the main news magazine programmes of both BBC Wales and the Welsh-language BBC Cymru Wales services, while BBC Radio Wales is aiming to have reports in all its shows as the Torch travels round the Principality. Reporters have been equipped with satellite systems, which will be shared between different locations to ensure facilities are available everywhere.

Despite concerns that the British public was largely apathetic about the Olympics in general and the Torch in particular, people have been out in force to watch it pass by since the Relay began in Cornwall on Saturday (19 May). A total of 8000 runners and walkers, most of whom were nominated by local residents to represent an area, will take it in turns to carry the Flame more than 8000 miles round England, Scotland, Wales and Northern Ireland, as well as the Isle of Man and the Channel Islands.