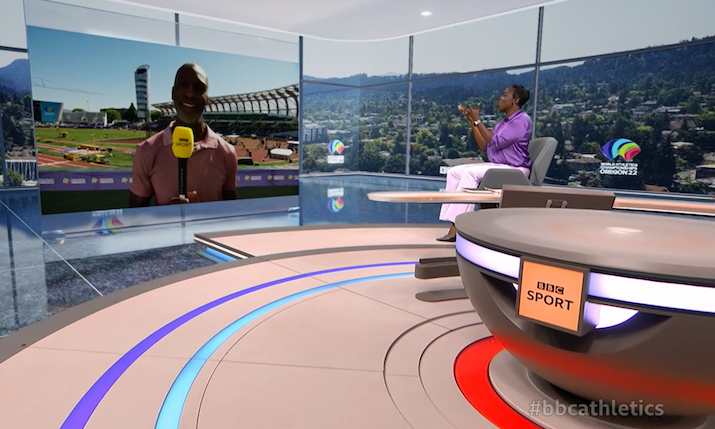 The BBC is broadcasting from dock10 studios in Salford and the Hayward Field at the University of Oregon as its live coverage of the World Athletics Championships in Eugene, Oregon, continues.

Running from 15-24 July, the event will feature Britain’s Dina Asher-Smith and Katarina Johnson-Thompson among the star names defending their titles. It is being hosted in the US for the first time. The BBC’s team of commentators and experts includes Steve Cram, Michael Johnson, Jessica Ennis-Hill, Paula Radcliffe, Denise Lewis, Colin Jackson and Steve Backley.

The World Athletics Championships have showcased the greatest athletes on Earth since 1983. Hayward Field at the University of Oregon is renowned as the ultimate track and field experience. It has been the site of some of the most incredible moments in the history of the sport. Now 2,000 athletes representing more than 200 nations will be realising a lifelong dream of running, jumping, or throwing for glory.

Andy Waters, head of studios, dock10, said: “We are delighted to welcome back the BBC team to our virtual studio at dock10 for the World Athletics Championships. Over the last couple of years, we have had the privilege to host the coverage for many global sporting events. This has really highlighted the advantages of virtual studios and remote production. The real-time photorealistic output enhances the viewer’s experience like never before.”