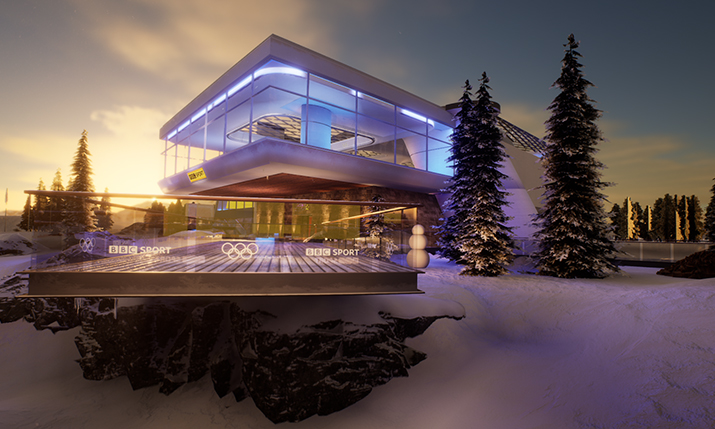 BBC Sport is unveiling a new virtual reality (VR) studio for its coverage of the Beijing Winter Olympics that will take viewers from a mountainside log cabin to a virtual ski resort, and beyond.

Rights holding broadcasters at this year’s Games are restricted from being able to roam the local area with camera crews, preventing them from giving people at home a feel of the country. However, the VR studio will take viewers to the edge of a mountain range and the excitement of a Winter Olympics in all its snowy glory.

Comments Jonny Bramley, executive producer for major events at BBC Sport, talking to SVG Europe from his hotel in Beijing: “We did consider whether we’d be looking at some live shots from some of the venues here in Beijing, but you actually come up with a more impressive environment if you kind of let your imagination run away and come up with something that might be your ideal log cabin in a snowy mountain environment.

“We’re pretty happy with the way the studio looks. And again, it’s clearly virtual and we’re not trying to pretend it’s actually real, but it does look pretty impressive, so we can have a bit of fun with that.” 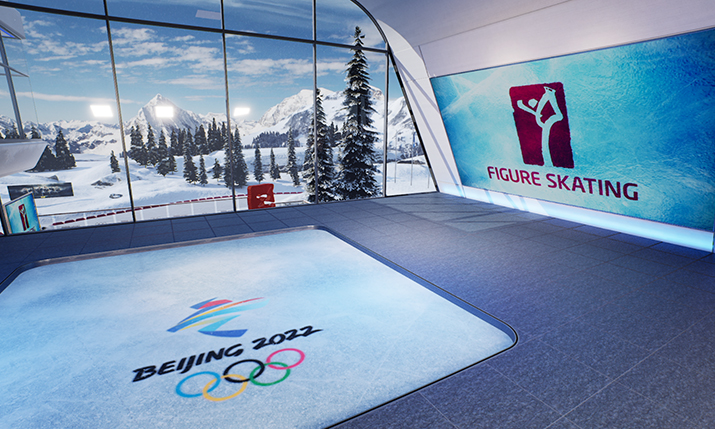 Even though the footprint of BBC Sport’s greenscreen studio being used for Beijing is only 84 metres square, it has managed to create a virtual ski resort an expansive studio

As the Winter Olympics is a smaller event than the Summer Games, this time BBC Sport is not utilising the large Dock 10 studio it made into its virtual Tokyo eyrie. It has scaled the VR set back to its Pres 2 studio, as it would for any other Winter Olympics.

Bramley comments: “The Summer Olympic studio was in one of the large studios in Dock10. This time we are using our more compact studio, but it’s bespoke. It’s probably the biggest virtual footprint we’ve got. Being able to use it for a major event like this is actually a great use of the space. It’s not a huge space but we’ve been very creative with our VR set design, so it’s great.

“Not only do we have a number of different positions inside the studio, but we’ve actually got various places where we can actually shoot – virtually – outside. I think [the studio is] probably one of the most exciting things about the coverage,” Bramley adds. 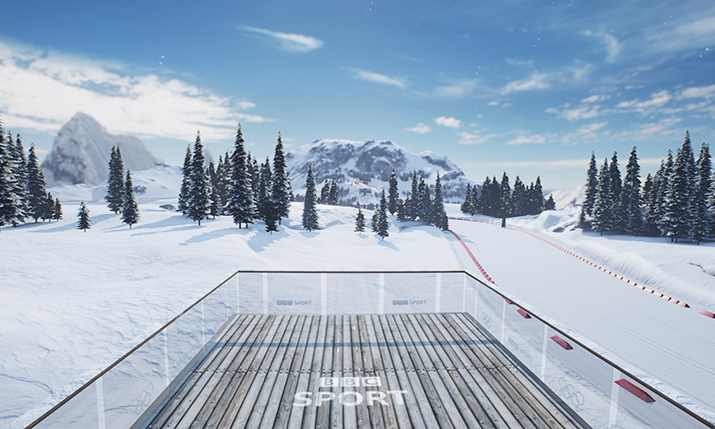 Pushing VR to the edge

John Murphy, BBC Sport’s creative director for motion, tells SVG Europe: “The innovative element of the studio is in the virtual design. Although the footprint of our greenscreen studio is only 84 metres square, we have managed to create a virtual ski resort and studio which has more than five different presenting positions both inside and outside. It will also reflect different times of the day and you may even spot some wildlife!”

Murphy explains that the technology which drives the virtual studio is a Viz 4 and Unreal Engine integration using the Viz Fusion keyer along with the Mo-Sys camera tracking system. Unreal Engine provides the virtual landscape and rendering and Vizrt’s Viz 4 and Viz Arc provide the control of the studio, including any AR.

He adds: “Our studio (Pres 2) which is based at Media City, Salford is a four-camera greenscreen studio with a locked-off fifth ceiling camera which we have brought in for the Winter Olympics; it gives us a bigger viewpoint from one of the positions in the studio.”

On the studio, he notes: “It is a fixed studio which has been active since May [2021] and has hosted various productions. However, the Winter Olympics is our biggest event to be held in there to date and therefore we are expanding the virtual footprint of the studio.

“Although the architecture of the studio is the same, we have created an extra presentation area inside, and the biggest change is that we now have three or four presentation areas outside of the studio in our own ski resort – a virtual ski resort. So our presenters will talk about ‘going outside’, but they’ll actually be inside the VR studio. We’ll be in the studio – the VR log cabin – then go to the downhill skiing or whatever, and when we come back our presenters can be ‘outside’ in our virtual ski resort. It’s pretty cool!” 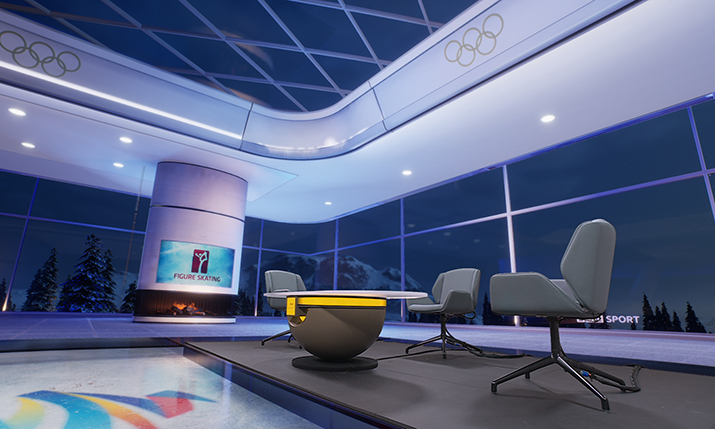 Viewers will be able to see day turn into night in Beijing time, and may even see some wildlife on the slopes

As to how the Beijing studio has moved on from that used for Tokyo and how BBC Sport is constantly pushing forwards with its VR set design, Bramley says: “It’s definitely evolved. Tokyo was a good example of how you’re not constrained with virtual reality. When you design a real set you’re very much constrained by those four walls and the challenge with that is how creative you can be within those four walls. A VR set design means you’ve got to literally think outside of the box – outside those four walls – and so the scenes we had in Tokyo meant the set was the entire city of Tokyo with our little box on top of a skyscraper in the middle. This time the set is in a mountain environment and it’s our own little log cabin in the middle of that.

“With every event you kind of learn about how you can use the technology and use your imagination to create something which is… unreal,” concludes Bramley.

The BBC will broadcast more than 300 hours of live coverage across BBC One and BBC Two, with even more coverage available on a second live digital stream on BBC iPlayer, Red Button and the BBC Sport website, to bring fans all the unmissable moments and hotly anticipated events as the Games unfold in host city Beijing.

In the UK, BBC Sport presenters presenting the live action on BBC 1 and BBC 2 will be Ayo Akinwolere on from midnight to 5am, Jeanette Kwakye on from 5am to 9.15am, Hazel Irvine from 9.15am to 3pm, JJ Chalmers from 3pm to 6pm, then Clare Balding with a highlights show from 7pm to 8pm plus Olympian Aimee Fuller will present on BBC Three ‘Extra’ from 8pm to 9pm, and will host a new Olympic Mile Podcast on BBC Sounds and BBC Radio 5 Live.

The Beijing 2022 Winter Olympic Games will be on BBC TV, BBC iPlayer, radio and online from Friday 4 February 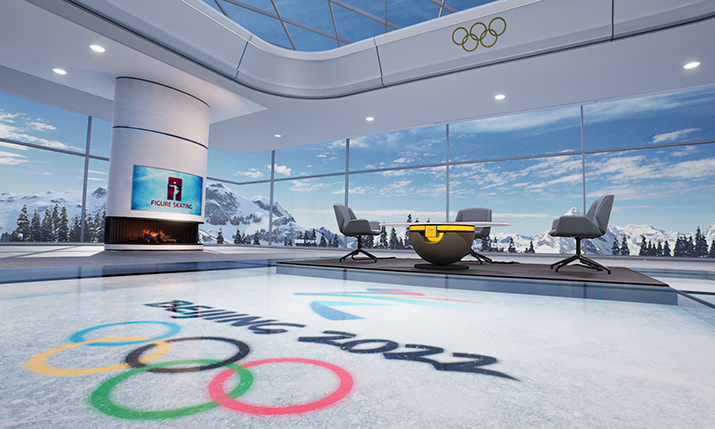