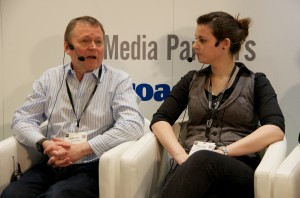 The rise of 8K, which NHK intends to use at the Tokyo Olympics in 2020, will mean that 4K, at best, will only be an interim standard. That’s the suggestion made by the BBC’s head of technology – HD & UHD TV, Andy Quested, who voiced his opinions during the BVE trade show in London last week, writes David Fox.

Indeed, Quested questioned whether Ultra HD even needs to become a standard. “In 2020 NHK will be shooting Super Hi-Vision, and maybe we won’t think of channels as single standards any more. You don’t on the internet,” he said.

“Give the content the quality and standard it needs, when it needs it. Maybe think of it not as a permanent standard, more as a toolset,” he added. “NHK sees the jump to 8K from HD as the leap to make, and sees 4K as a cheap European/US standard made to sell TV sets.”

Quested, who was taking part in a panel session entitled ‘Building for UHD broadcast and beyond – outlooks for uptake and making timely investments’, believes that if broadcasters are to move to UHD “we’ve got a lot of decisions to make,” on things like the new transmission medium, new set top boxes, and new encoding mechanisms.

However, we can afford to be more flexible with the introduction of UHD than with HD as so many people now connect their STB and TV to WiFi, and services like the BBC’s iPlayer can do more now via broadband than it can output via traditional transmissions, such as 3D. This means “we can also look at different options and resolutions without having to commit early to a disrupting technology”.

“Technology is changing so quickly now that there never seems to be a right time to invest,” said panel chair John Hunt, UK executive director, OBStv. Although some broadcasters, like Sky, are keen on shooting more UHD, OB companies are wary.

“Our concerns are how many production facilities we can put on the streets. We have to persuade German OB companies to invest in 4K, but we can’t give them a guarantee,” of a return on investment, said Alessandro Reitano, director of sports production, Sky Deutschland. “We want to increase the quality of production, but also have to convince the marketplace to invest in 4K.”

Some of the market hasn’t even invested in HD. “A lot of channels across Europe are still in SD,” said Rod Fairweather, senior director, broadcast & infrastructure technology, Turner Broadcasting, and while broadcasters like Sky may invest in UHD, organisations like his “will probably be at the backend of adoption”.

Consumers are already beginning to invest in 4K sets, but Quested is “really concerned about the current implementations in the consumer market,” where all that is being added are “just more pixels. But you’d need a much larger television to spot the difference.” He believes that Ultra HD can only be successful if it “comes as a package with higher frame rates, higher colourimetry and higher dynamic range.”

“Ultra HD gives us an opportunity for a step change in quality, but the fear is the initial 4K screens won’t take advantage of this. If we waste this opportunity on just more pixels, we will regret it,” he said.

Yvonne Thomas, the EBU’s project manager – future television, UHD & 3D systems, believes that “it’s not the resolution” that will sell people on UHD. “The consumer might not even realise it is higher resolution. Maybe we don’t need high resolution for the moment.

“What is worth spending on is the high frame rate (going from 50 to 100 or 60 to 120fps). It is certainly worth it for sport,” she said. Of course, this will create its own challenges. “Panning speed will be different, making it tricky for the creatives.”

High dynamic range will also offer a noticeable improvement. “If we go to 10- or 12-bit, we can improve the picture quality. It will give the impression of being sharper, cleaner. It just gives you a little bit more information,” she added. “In the end, it is the combination of all the features.”

“We have to take care that we shoot a football match so that it covers it the way HD covers it now,” warned Reitano. “We have to be able to consolidate the new technologies with the emotional coverage of today’s sporting events.”

“If you can shoot a match in Ultra HD and scale it down to all the products you have, then it is worth the investment, because you have one production line,” he added. “If you do a parallel production, as with 3D, your spending almost doubles.”

Fairweather also hoped that UHD avoids some the pitfalls of 3D production, “where we could get the 3D effects, but we couldn’t tell the story of the football match.”

The BBC has shot the Wimbledon Tennis Championships in 3D, but “to get good 3D storytelling the cameras would have to be in shot for the HD coverage. It’s one of the reasons HD and 3D didn’t work very well together in live production,” said Quested.

“I don’t want to be locked off with one camera and watching a football match for 90 minutes,” added Reitano. “It loses the storytelling. We need to provide a very emotional Ultra HD product, without any limitation.”

However, it will need experimentation to find the right tools to tell the story of a match, and “we have to learn what viewers will accept,” he said.

A questioner from the audience said that BT Sport was looking at UHD, but was disappointed at the frame rates available in current technology, and expected it would have to wait until 100fps is available.

In response, Quested said he is seeing a divergence between the two main areas of programme making: 24/25fps for drama and scripted programming, and sport or shiny floor shows that need to go to higher frame rates. “The EBU is going for 100 frames per second, as 120 frames per second is already in the Ultra HD standard.”

“It doesn’t make sense to spend money on something that doesn’t affect the image quality, such as high frame rates for drama,” added Thomas.

“In the cinema, people don’t necessarily want the immersiveness of higher frame rates [as seen with complaints about The Hobbit], but for something like sport, or reality programming, we do,” she said.

A further problem for sports production now is that current 4K cameras don’t have the depth of field we’re used to, and this won’t be possible “until we get smaller sensor cameras that work at that resolution. We don’t want to have to pull focus from one side of the field to the other,” said Quested.

Thomas believes that the Olympics in 2020 will be the first Ultra HD opportunity for many big broadcasters, but Fairweather maintains that it will be 15 years before UHD goes mainstream, whereas Reitano thinks “it will be ten years before we will have Ultra HD as a standard. We will want to produce sport, initially, in UHD and will start in 2015 with regular production in UHD for premium services.”

Although the BBC has only recently finished moving all of its channels to HD, it started HD production 12 years ago, and is now looking to future proof its archives. “Even if Ultra HD is 10 years away, we are starting to produce some programmes with a longer shelf life in Ultra HD,” added Quested.