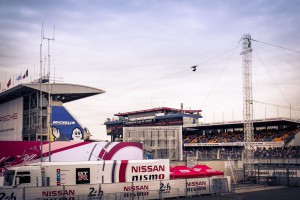 For the past ten years, AMP VISUAL TV has been covering the renowned endurance race Le Mans 24 on behalf of the Automobile Club de l’Ouest (ACO). In the wake of the 2015 edition – which took place from 10-14 June – SVG Europe spoke to AMP VISUAL TV about the challenges and technical innovations involved in capturing this much-loved event.

For the 83rd edition of one of the most famous sports car races in the world, a staff of 200 technicians from AMP VISUAL TV worked together to cover the event. This year the Le Mans race was aired on 30 television stations in 190 countries around the world.

“We are very proud to be part of such an event. These last ten years working closely together with the ACO has enabled us to achieve global best-in-class motorsports coverage,” explained Gilles Sallé, founder and CEO of AMP VISUAL TV.

Over the years, recording and broadcasting facilities have evolved considerably. At first they were scattered around almost 14 kilometres of the circuit, but for the last few years production facilities have been centralised in one single site thanks to the advent of fiber optic connectivity.

In 2015, AMP VISUAL TV deployed the largest technical setup in the history of the 24 Hours race. Some 45 cameras (mainly Sony HDC1500 and 2400 models) followed the race, including seven remote cameras placed in the pits. A quad bike and a helicopter mounted with cameras were also incorporated into the set-up, while a cable deployed over several dozen metres above the pit-lane allowed for the capture of some spectacular footage of the cars arriving and departing.

“For the first time we had a dolly system in the pits that could reach the same speed as the cars in this area, i.e. 60 km/h. It’s a very valuable tool to make this key zone come alive,” said Olivier Denis, who produced the world feed. “During the race, which is actually made up of four races in total (Note: there are four separate classes competing), I needed to step back and take in the overall picture. That is why this is the only event where I did not switch cameras myself but gave out instructions orally. Three producers took turns to work by my side and provided me with precise information on what was going on. And for the first time we had someone managing the slow motion replays and overseeing the 11 LSM operators.”

A total of 18 cars (as opposed to 11 in previous years) were equipped with 3-4 onboard cameras connected to a new Tsumi Box developed in-house by the Sables d’Olonne services provider. Another important element is that coverage was exactly the same during both day and night.

“The ACO’s aim is to provide the best possible feed to all TV stations wanting to broadcast the entire race. Also note that we are using a 4K 500 fps slow-mo camera for the very first time at the 24 Hours Le Mans race,” said Fabrice Miannay, RF sales manager.

AMP VISUAL TV provides TV stations all over the world with the international signal, which is produced using five OB units including the Millenium Signature 10 for production. Four other units are used to provide the graphics and design for Eurosport International, Eurosport France and Quest TV.