Behind the scenes with United at the MTV Europe Music Awards 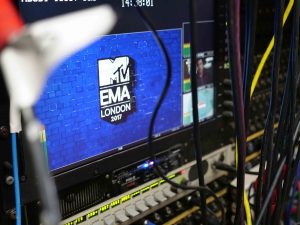 The show at the MTV Europe Music Awards (EMA) may well be the biggest music and video extravaganza in Europe. This year’s show, hosted by Rita Ora, was staged at the SSE Arena in London on November 12, writes Ger de Gram.

United is in charge of recording this unique event, which this year was broadcast in both HD and UHD. This is the fifth time United has organised the recording and, as with every previous edition, technological innovation is a big part of the production.

This time it’s 4K that’s leading the way. This higher image resolution is not new in TV land, but what is new is broadcasting live at this level of clarity.

Although broadcasters in Germany and the UK are experimenting extensively with this technology, its coverage is nowhere near universal, and bringing an Ultra-HD feed live to viewers’ screens is a very different matter from regular broadcasting.

A big reason for that difference is that the EMA is not a single broadcast event. On the contrary: there is a backstage programme, a red-carpet show and the actual live presentation of the awards, all of which is interspersed with all kinds of film clips, snippets and interviews. And that’s not including all the feeds for social media yet: little bits and bytes, snippets for platforms such as Snapchat and Twitter.

To make all this content available, United installed a central hub: think of the post production van as the lynchpin of the show. This technical heart was full of Macbooks, monitors and other equipment to make sure the recording went smoothly.

An essential part of the project was a tiny box in the middle of the van: the server. The heart of the operation. “This is where all the content comes in,” explained Wouter van Heuningen, who devised the server infrastructure. “Everything is assembled from here. The box also functions as a kind of post box: it sends all potential content to the various vans and editing suites. No one needs to carry around a USB stick or SD card to get hold of images.”

The EMA set-up is so huge that you pass production spaces and vans in all kinds of areas around the SSE Wembley Arena in London, the location of this year’s action. It’s for good reason that some United staff members had their bicycles flown over to the UK as a way to avoid having to walk far. For example: there’s a good kilometre between the editing suites and the production van.

A super-fast 10GB fibre optic connection ensured that all (4K) content was available everywhere, all the time, said Rens Dijkshoorn, United’s technical manager. “We built a special 4K infrastructure to account for the huge amounts of data that come with Ultra-HD.” 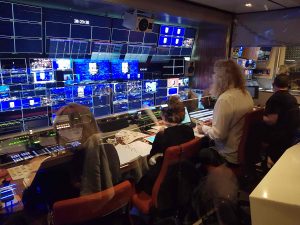 As early as the beginning of October, well before the show on 12 November, the team was already considering the whole technical side of the project. A sizeable task, according to Dijkshoorn. “It’s a combined show, with both 4K and HD. That’s pretty complex. You have to plan it really carefully.”

“In the end, what we really want is to identify exactly what the client wants,” said Bolke Burnaby-Lautier, who has the final responsibility for the EMA at United. “Then I just start building; the different sections at the venue have to fit together like Lego blocks.

“We’ve done a lot of live shows like this, with lots of cameras and different locations. That’s a piece of cake for us – we’re good at it. But that’s HD. It’s no simple matter to turn that into 4K.”

Not to mention that many different kinds of cameras were used today, from traditional, user-friendly broadcast cameras to more cinematographically sophisticated film cameras such as the Sony F-55, to give the show a more luxurious look. “A hotchpotch,” sais Yke Erkens, an expert in film cameras, with a smile. “The art is to combine the user-friendliness you get from broadcast with the look of film.”

To make sure the 4K went smoothly, in addition to a traditional HD set-up United also installed an extra mainframe, located outside the production van. This mainframe was mainly used to maintain as comprehensive an overview of the event as possible. “Everything in the van is done in HD, but outside it is simultaneously broadcast in 4K,” said Robin Onck, who keeps a constant eye on the UHD streams during recordings.

“That’s how the show is broadcast as everyone already knows it, but we can add a special UHD skin to that for Sky,” Burnaby-Lautier explained. “30 million people will watch the live broadcast, but probably another 300 million will see the digital content. That side of the work is growing.”

“You all have to have a bit of the United madness inside you to do this work,” laughed Alissa Jalink, 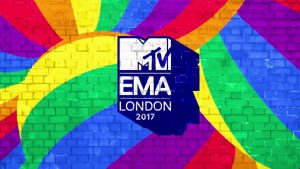 responsible for logistics and cable management at the show. A lay person would probably have trouble working out what the second part of her job title involves, but given that there’s a distance of 800 metres between the backstage programme and the live show, the viewer would appreciate that there can sometimes be certain difficulties.

This time, the logistical process was mainly complicated by the venue itself: although on TV the show looked as if it was being held in a big building, the SSE Arena is actually quite modest in size. With only one entrance for all the vans, lorries and other vehicles, construction took a day longer than anticipated.

“We build sets, only to take them down again,” Jalink says. “The key is being able to clear it all out as quickly as possible. Then we can move on to the next job.”