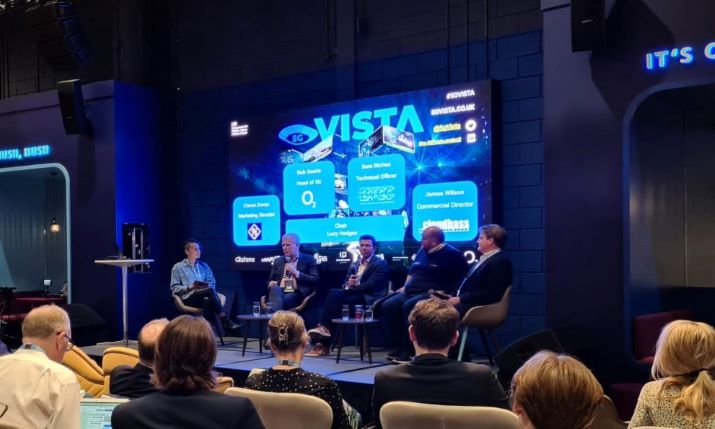 The second phase of the UK government-backed 5G Create project – Video In Stadia Technical Architecture (Vista) – was unveiled at the O2 Arena in London on Wednesday (15 September), showing footage from the British Touring Car Championship (BTCC) being integrated into a 5G infrastructure to offer a high-quality in-stadium broadcast feed.

Vista – which kicked off with a feasibility study earlier this year – aims to demonstrate how enhanced interactive viewing experiences can be delivered direct to devices, using 5G broadcast technology at live entertainment venues.

The second stage of the project focused on a demonstration at the O2’s Blueroom venue in Greenwich, using motor racing footage provided by BTCC.

While the BTCC is given widespread exposure on the ITV network in the UK, organiser TOCA has been looking at ways to add value trackside for its legion of die hard fans; around 380,000 of whom attend the championship’s events in an average year.

As Kevin Zemrowsky, co founder of Imaginary Pictures, which supplied the production and live camera expertise for the demo, explains: the organisation wants to give fans more of a sense of what’s happening once the cars leave the pit lane.

“Right now on-site spectators can see the cars lining up at the start line, but then they all drive off and you might not see the cars again until they come back – but then that might be in a different order, or there might be fewer drivers,” he says.

“While television viewers are supplied with a constant feed of information, the venues tend to rely on a couple of screens, which is a bit of a one-size-fits-all solution,” he adds

Sam Riches, technical officer at the BTCC, adds that TOCA had already been searching for ways to exploit 5G to make onsite viewing more seamless, delivering extra information to devices, allowing them to see replays, even jumping from driver-to-driver inside the car, or from different angles. However utilising such 5G cellular network capacity is expensive.

He says: “At the moment we’re limited in the number of on boards that we can physically get off the cars because of the cost of the infrastructure required to do it.”

“The beautiful thing about FeMBMS is that you can put one or two antenna in a stadium and it is enough to cover the whole venue. That makes it particular effective in stadiums but also for other events too”

Vista’s objective is to offer a more efficient use of network resources by eschewing the standard unicast delivery model used by cellular networks in favour of an internationally-standardised multicast broadcast, multicast solution, FeMBMS, the 17th incarnation of which is set to be released for 5G next year.

As David Owens, head of technical trials at O2, which is acting as the technical lead on the project, explains: “One of the complicated things with stadium solutions is that the more people you have involved in the stadium the more base stations you need and the more cost that incurs.

“The beautiful thing about FeMBMS is that you can put one or two antenna in a stadium and it is enough to cover the whole venue. That makes it particular effective in stadiums but also for other events too.” 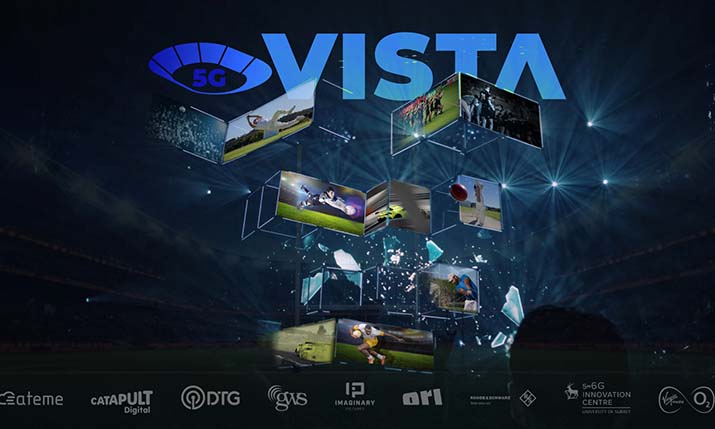 According to Owens, the easiest way to converge 5G and broadcast is to create an overlay over the top of the network “So you can still use your 5G network infrastructure to manage and control that.”

For the Vista demo, Digital Catapult provided the 5G test bed network while Rohde & Schwarz provided the equipment, systems and expertise for a multicast/broadcast overlay network based on FeMBMS.

Footage taken from a BTCC race on the Thruxton circuit a couple of weeks earlier, which captured all the streams that the sport would normally cover for the broadcast, was passed over to the Vista team to transcode.

According to Zemrowsky, over the course of the project the team tested a number of different ways of getting the content into the system included taking direct IP feeds from the cameras.

However, a necessary processing step, containerised controlling in the cloud, was required before transmission over FeMBMS. Recently joined consortium member Ateme provided the encoding system that packaged the camera feeds into the correct formats for broadcast distribution while Ori Industries provided the Multi-access Edge Compute (MEC) platform that enables encoding for live sports streaming services on 5G networks.

Buchan explains: “The MEC solution removes the need for dedicated hardware at venues to be able to encode the video feeds. You could have the MEC solution provided by Ori, which would essentially have the Ateme encoding solution as an application on a phone that could be started up and shut down as needed.

“This could mean for venues that are not in use regularly or that cater for smaller/not as well known types of events they could deploy this on generic hardware that could also be used for other things or it could be deployed as a cloud solution.”

The content then passes from the data network to R&S’s Broadcast Service and Control Centre network (BSCC) – which claims compatibility with a range of different data formats.

The BSCC takes all these different formats and any other data required and puts it into FeMBMS transfers where the network then prepares it to the point of live transmission.

“At that point it meets our Software Defined Exciter because we need to go from a data network world to a world that a standard UHF TV transmitter can handle,” adds Paul Ramsden, head of commercial projects at Rohde & Schwarz.

According to Ramsden, radio frequency-wise Vista used an O2 frequency on the top end of Band 5 UHF, which was recently cleared for 5G use.

Following the demo, several stakeholders from the sports and technology worlds espoused the benefits of the Vista model.

James Wilson, commercial director at OB firm Cloudbass, which covers British Touring Cars for ITV and a range of other sports and live events for the BBC, Sky and BT Sport, commented: “Like we’ve seen today with the example of ITV and British Touring Cars, there is a brilliant opportunity to level up the terrific work broadcasters do – giving them a chance to have a deeper presence on site and deliver a richer experience to audiences.”

Wilson adds that for younger generations of fans engaging in multiple screens on a constant basis, this level of interaction would soon be expected.

“A project like 5G Vista also gives a nod to a generation used to engagement on devices, by developing solutions with ‘generation screen’ at front of mind,” he says.

According to DTG’s Buchan, sports like golf, motor racing and cricket, where it isn’t possible as a spectator to catch all of the action at once, have been identified as ideal candidates for the technology, as well as multi-events such as the Olympics or festivals where several bands are playing simultaneously.

Riches adds that just by participating in the project he has seen how 5G broadcast can add value to motor racing sport.

“Ultimately everything we try to do has to add value and in this case it’s all there: the ability to distribute more content; we could have better quality pictures in our on board footage for each vehicle and it would allow us to give more clips to engage with the fans. We could also go down the US and Australian route of having sponsors for cameras in each of the cars.”

The DTG has acknowleged that for in-stadia 5G projects to succeed, they need four main stakeholders to come together: venue owners, mobile network operators, content providers and rights holders.

The remarkable thing about Vista, for Rob Searle, head of 5G at O2, is that these partnerships came together seamlessly. “As we innovate with 5G and we are trying to unlock the value for it, what we’ve recognised clearly is that we need to partner and collaborate,” said Searle .

“Some of these partnerships are difficult to find but this one seemed to reveal itself quite quickly, we have good synergies across all of the partners here, because there’s a really good use case,” he added.

The British Touring Car Championship demo comes ahead of a full demonstration at a live sports event in February 2022 – mooted to be the rugby at Twickenham. The project will run until the end of March next year, together with conclusions and a route to market.