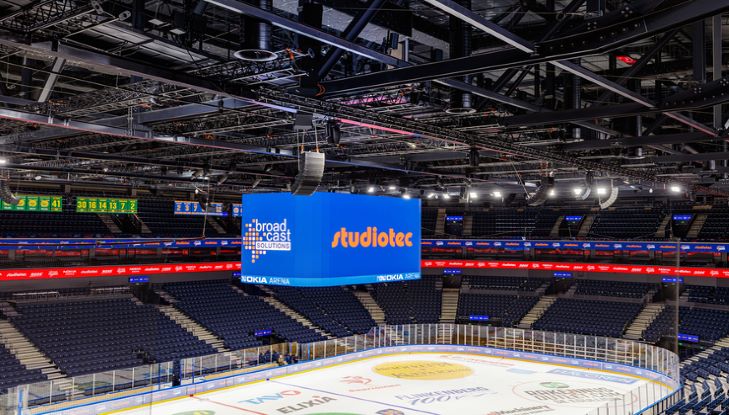 The Helsinki-based firm was responsible for developing and implementing the live broadcast technology which has, at its heart, a master control room for managing, collecting, editing, and distributing video and audio signals within the venue and to outside partners.

The control room serves as a distribution centre for video, audio and commentary signals. On the video side, it controls and feeds all screens in the venue, such as the LED cube, boards, ice projector, arena TV and digital signage. It also manages external broadcasts by forwarding signals to the OB van compound to a dedicated fibre link for broadcasters and distribution partners. Furthermore, the installation operates all in- and outgoing audio signals from the ice rink, feeding the arena PA, stageboxes around the ice rink and the PAVA system.

Antti Laurila, managing director at Broadcast Solutions Nordic, said: “I am from the Tampere region and extremely proud that we are involved with such a great project. The Live Media System we designed and implemented enriches the visitor experience and gives a wow-effect that has not been seen in Finland before. Broadcast Solutions’ experience in the broadcast system integration and the company’s continuous learning and innovations in the latest technologies is key to such a successful project implementation. We were involved with system design from the early beginning, so all aspects and innovations were considered in the solution that meets the customer’s expectations.”

Supporting 12G throughout, it is UHD compatible and adds multiple IP I/O to the production system. All dasher boards and pillars are LED walls giving the team the freedom to show whatever content is needed.

Matias Palo, AV technician at Aku Factory, commented on working with the system daily: “One of the best parts of the new system is that it’s very logical to use and graphics functions are perfectly integrated and native in XPression. So we can do animations directly to the system and not use multiple tools and convert graphics back and forth. With the control room, transitions from one production to another are effortless. We can move from ice hockey productions to concerts fast and without problems.”

Audio is based on a Dante audio network system with flexible ways of connecting audio from any instance in the network. Stageboxes and Dante I/O access points are located at different spots in the venue, running on fibre cables. A Yamaha QL5 mixing console has the power over all audio signals in the control room. A Riedel Artist 64 Port Intercom System is used for internal and external system communications.

Besides being the new home of two ice hockey clubs, Tampereen Ilves and Tappara, the building is a multifunctioning landmark with hotels, restaurants, casinos and event facilities. It is located in the centre of the Finnish city.

The Nokia Arena was designed by architect Daniel Libeskind and officially opened in December 2021. It will host the Ice Hockey World Championships in May 2022.