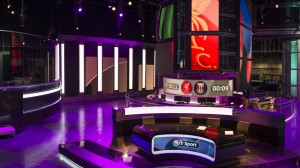 BT Sport launches with three channels on 1 August and is in the midst of last minute technical preparations and rehearsals at its new studios centre in east London. Industry journalists had the opportunity last Monday (22 July) to look ‘round the broadcast complex in the Queen Elizabeth II Olympic Park and discuss the project with BT Sport technology and operations staff, the main equipment suppliers and representatives of Timeline Television, which managed the design and building of the three studios and supporting production areas.

The studios are within the iCity development at Stratford in part of what was the International Broadcast Centre (IBC) used for the host broadcast and international TV coverage of the London 2012 Summer and Paralympic Games. It will now broadcast live presentation of BT Sport 1, BT Sport 2 and ESPN.

The focal point of the development is the 14,000 square feet space comprising both Studio 1 and Studio 2, described in fittingly sporting terms as being able to accommodate four and a half tennis courts and claimed to be the biggest L-shaped studio in the world.

A striking feature of Studio 1 is the glass floor at the far end of the space. This can be illuminated using LED lights in different configurations to create half-size football or rugby pitches and tennis courts. With the appropriate layout selected a full-size goal or rugby posts can be put in place to allow pundits to recreate and analyse specific moments in a game.

At the BT Sport launch event in May, executive producer Grant Best said the broadcaster had “the opportunity to reimagine how people watch sport on TV”. He highlighted the idea of analysing sporting action using real people instead of graphics but did not give further details on how that might be done. Subsequently, BT Sport contacted ASB, a Munich-based squash court manufacturer. A recent high-tech addition to ASB’s product range is the GlassFloor, developed with glass processing specialist KINON Porz of Cologne. LEDs in the substructure of the toughened glass are controlled from a light box to form the correct markings for individual sports. Jamie Hindhaugh, chief operating officer of BT Sport, commented that the “pitch” and the wall illustration of spectators would also be used as a background for programmes. The space can additionally accommodate an audience of up to 160 people.

Hindhaugh explained that the majority of TV studios are “four wall” boxes and if the broadcaster had wanted to go in that direction it could have hired space at an established facility, such as Pinewood or The London Studios. “We had the opportunity to create an environment that was about being live on air with more than one channel at a time,” he said.

As part of this, presenters including Jake Humphrey, who will front the Premier League football coverage, are able to move between the studios and channels. To allow him and others to wander further afield 16 RF aerial arrays have been installed throughout the building.

“We’ve wired the entire building to work with the radio mics and radio cameras,” explained Dan McDonnell, managing director of independent facilities company Timeline Television. “You can send a radio camera with a radio mic up to a dressing room or the main office and walk through the whole facility without the RF signals being disturbed, because of the automatic switching being used.”

The wireless mic system comprises Wisycom MRK960 receivers and MTP40 belt packs with DPA 460 microphones. The in-ear monitoring is based on Wisycom’s recently released MTK952 system. Both were supplied by Wisycom’s UK distributor Raycom. BT Sport was the first UK customer to buy the system, although the BBC has since bought and started to use it as well.

Timeline TV was selected by BT Sport as its lead partner to manage the design and build of what is described as the “production hub” at iCity. This included the studios, galleries, post-production suites and master control room. The company now has a five-year managed service contract to oversee technical operations at the broadcast centre, providing support for the workflow and various departments.

Studio Schemes supervised the building of the studios and suites, with technical installation by systems integrator Megahertz. Among the key suppliers is Sony, which provided three MVS-7000X and five MVS-3000 vision mixers, fifteen HDC-2400 studio cameras and TriMaster OLED monitors.

The video infrastructure is based on Harmonic processing, storage and play-out, with Aspera providing automation for the file-based production chain, as well as connectivity for ingest and delivery.

The programme production area has been designed as what Hindhaugh calls “one big creative space”, which he says is unique in the business. This open-plan office can accommodate staff from several independent producers, at the moment including Boomerang and Sunset+Vine, plus freelancers. Personnel have access to all material on the file-based system at their desktops through EVS IPBrowse terminals. The installation also features XT3 and XS studio servers for live production and IPDirector asset management.

BT Sport moved into the iCity building in February, with the target of going on air by the beginning of August. Hindhaugh, who was head of production for the BBC at London 2012, comments: “There’s been some huge challenges along the way but to be able to come back to the Olympic Park – which I vowed never to – so soon shows the spirit that came out of the Olympics and the partners we’ve worked with.”