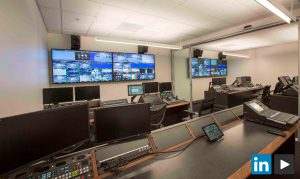 To support development of the major new initiative LinkedIn Live and other media ventures, LinkedIn researched and built a media network to enable it to produce video and audio remotely, streaming broadcast-quality media over IP between its production facilities worldwide.

The aim was to use real-time streaming between its New York venue, which can host an audience for an event, and control rooms on the West Coast, where a director and technical staff might reside, to produce content to support sales and marketing services, internal corporate communications, and other ventures. This production workflow means that camera feeds are transported between studios and a central production facility, in different geographical locations, over an efficient media network.

LinkedIn has invested in significant media production facilities at its Sunnyvale, California, headquarters, and in several studio locations in the San Francisco Bay Area and in Manhattan covering the East coast. When the company planned an upgrade to its production facility in New York City’s Empire State Building, it saw an opportunity to take the leap into remote production.

Gary Schneider, manager, broadcast systems engineering and LinkedIn’s lead media systems architect, spent four years spearheading the initiative. “With a media operations team based in the San Francisco Bay Area, a video production studio in Sunnyvale, and editorial in New York a networked approach would mean that events could just as easily be staged in the New York venue, controlled in the Bay Area, and streamed live over the platform. We didn’t need a control room in New York because our vision was to build a model where we could remotely manage operations from a central location.”

The first implementation of the network was point-to-point between New York and Sunnyvale. The next step was to scale this out with a solution that would permit no-latency media transport between multiple sites.

The leap from standard video conferencing to broadcast quality was another goal. Schneider tackled the problem with the help of Richmond, California-based AV integrators David Carroll Associates. DCA specialises in designing, installing, and maintaining integrated audio, video, and control systems for a wide variety of environments, tailoring every solution closely to the needs of each project.

“Net Insight’s IP tunnelling technology is what really sets them apart,” Schneider said. “It really simplified media transport across a corporate network. Additionally, the Nimbra Vision platform allows us to manage all the Net Insight products from a single screen. While other vendors may have similar capability, nothing operates with the performance of Net Insight.” 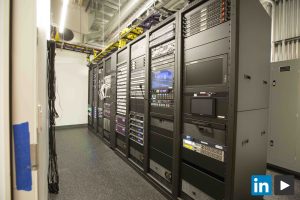 Another factor in LinkedIn’s selection of Net Insight was its ability to maximise resources. “I am limited in bandwidth and where Net Insight comes into play is that with JPEG2000 compression I can get excellent quality and more streams. Operating uncompressed I can only get two streams, but with Net Insight I can get eight or more.

“The low latency video is awesome. The solution enables us to produce shows with the host in New York interviewing people in Sunnyvale and the seamless interactivity is amazing without noticeable latency. Although the cameras have round-tripped to Sunnyvale and back you could have done IMAG (image magnification) in New York. It was amazing. It kind of blew everyone away.”

Examples of events include ‘Transform Her’, a diversity show about women leaders in technology and other businesses, which was produced in Sunnyvale from the Empire State building All Hands venue. ‘Live with Marketers’ was staged in the New York studio and featured marketing professionals from New York and within LinkedIn, conducting interviews in an Oprah style.

“The old way to execute on those events would have required two complete teams, where we would travel eight people and have an electronics mover ship all of our gear from the Bay Area to Los Angeles,” said Schneider. “That’s where the economy comes from with this system. Now, when we do that same event, we rent one rack and send two people.”

He explained, “We get a consistency of product because the same control room and team is used for productions taking place all over, we leverage our capital investments in these control rooms, and we don’t have to send a large team out on the road, so we’re saving on travel and entertainment costs.”

Moving forward LinkedIn is planning on utilising the reliable and high-quality Nimbra for other locations worldwide, starting with its EMEA headquarters in Dublin.

“We’re building a studio to come online in about 18 months. We’re not sure if we’ll use Nimbra over dedicated links or over the internet at this stage, but we will be using Net Insight hardware. We will have a technician in Dublin, but management of productions will be remote which is what the Net Insight gear will allow us to do.”

Nimbra VA 225s are also used as a flypack by Schneider’s team enabling any office to participate in a LinkedIn Live event.

“Where we’d use videoconference technology we want to bring that quality up so in every office I can get a chunk of network address space, plug in the Nimbra VA via ethernet and take full control over the network remotely. It really is that simple.

“My vision from the start was to achieve seamless production across multiple studios around the world all tied together through a central control room. This is exactly what we are building.”