CEATEC 2012: A look inside NHK and JEITA’s ‘Ultra’ cool exhibit

No spot on the CEATEC floor offers a more tantalising look into the future than the joint exhibit by NHK (Japan’s public broadcaster) and JEITA (Japan Electronics and Information Technology Industries Association). With two Super Hi-Vision (SHV) Ultra HD demos, an SHV 3D binoculars setup, an impressive glasses-free 3D demo, a 3D Olympics presentation, and a look at NHK’s soon-to-launch HybridCast interactive-TV offering, it would be easy to spend an entire day at the booth just viewing all the compelling content.

Aptly themed “New broadcast services that will change your lifestyle”, the joint exhibit provides a look at several groundbreaking technologies that are mostly still in the prototype phase but are likely to pave the road for the next two decades of high-resolution–video delivery. 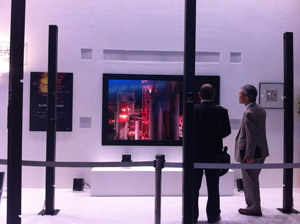 First and foremost, there are the two Super Hi-Vision demos. Although both 85-in. displays feature the stunning 8K video (7680×4320) that the NHK-developed format is known for, only one offers the full 22.2 multichannel surround-sound experience (the other is stereo). The full Super Hi-Vision experience — with a long line of attendees waiting to get in — features the launch of the final NASA space shuttle; the stereo experience provides a series of images and landscapes shot throughout Japan.

Not your grandfather’s binoculars 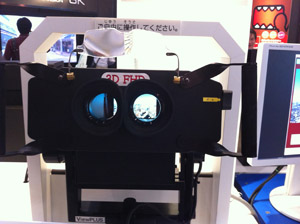 Perhaps the most intriguing — albeit the least sports-production–oriented — element of the booth is NHK’s new SHV 3D binoculars application, which allows users to zoom in on wide-angle landscapes without notably losing resolution. To produce the application, NHK filmed locations in Japan with its 8K cameras to create an Ultra HD image. The user can pan, tilt, and zoom anywhere in the image without losing visual quality. In other words, when the user zooms in on a single building within the landscape, a full 1080p image is still visible within the overarching 8K frame.

3D: glasses or no glasses, it looks good 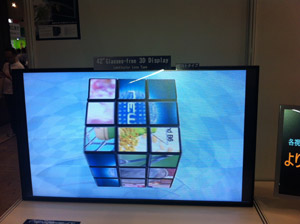 The JEITA booth is highlighted by a quartet of 3D demos, two that require glasses and two that do not. Although the 42-in. glasses-free 3D display is impressive, gaping holes between viewing angles make it difficult to watch unless the viewer is still.

The glassless area also features an interesting medical-imaging demo that provides a 3D image of the human heart.

On the glasses-required front, a London 2012 Olympics sizzle reel plays on a large Panasonic monitor with Panasonic glasses, while Japanese arts-related content plays on the other display. 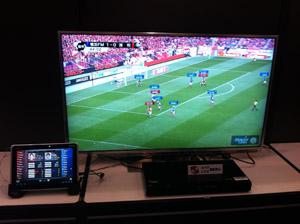 NHK’s HybridCast links broadcast and broadband in a single experience.

Of all the futuristic elements on exhibit at NHK’s booth, HybridCast is the most nearly available. The broadcast-broadband hybrid is likely to launch next year and offers a variety of content and interactive elements from both the television and the Internet side of the viewing experience.

This multiscreen experience is a primary initiative for NHK, which plans to expand the technology further once it is launched (target date in the first half of 2013).