Sharp is showcasing a parade of cutting-edge displays — both large and small — at its booth at the CEATEC show in Japan. Highlight of the exhibit is a 60-inch 4K television featuring a new technology that the company says can “reproduce the cognitive process by which the human brain interprets light stimuli in natural scenery” to create a more lifelike image. 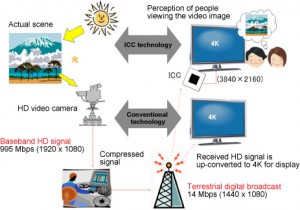 While these technologies attract interest, the 4K LCD AQUOS display featuring ICC (Integrated Cognitive Creation) technology steals the show. The prototype, developed by Sharp and I-Cubed Research Center, boasts 3,840×2,160-pixel resolution, four times that of 1080p. I-Cubed’s ICC technology is a new signal-processing tool that, when combined with panel-control technology, reproduces the cognitive process by which the human brain interprets light stimuli as natural scenery or an object, using a TV video display to re-create the equivalent light stimuli.

The result, on display in a viewing theater at Sharp’s booth, is spectacular video quality (this reporter can vouch for that) that makes landscapes, human figures, and textures on the screen seem almost true-to-life.

According to Sharp, the two companies will be working to commercialise next-generation high-definition large-screen LCD TVs and, integrating their respective technologies, will collaboratively pursue creation of new digital video markets.

Will Sharp take a bite of the IGZO Apple? 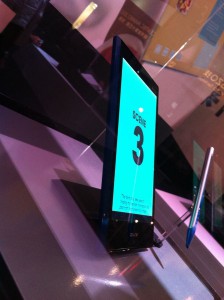 Also generating buzz at the show is a trio of tablets (7-inch, 10-inch, and 13-inch) featuring the IGZO high-crystallinity oxide semiconductors developed by Sharp and Semiconductor Energy Laboratory. The IGZO touchscreen displays are capable of higher resolutions with lower power consumption in a thinner body.

While these sleek, hi-res mobile devices are impressive enough on their own, the buzz around them at CEATEC is boosted by the fact that, although there are no IGZO devices currently on the market, Sharp has been producing the screens since August for an unnamed customer. Several reports say that this unnamed customer is Apple, which could use the IGZO screens as the display for its long-rumored iPad Mini.

Tired of glare? Look into the Moth Eye
Viewers weary of the pesky glare on their TV screens look to be in luck: Sharp’s new Moth Eye Panel technology keeps screen reflections to an absolute minimum. Integrated into an AQUOS LCD TV, the Moth Eye Panel achieves ultra-low-reflection surfaces with reflectance of 0.1% or less via moth-eye–like nanostructures formed on film.

It also provides wide-angle high-level visibility, and use of nanoimprinting technology enables mass production of ultra-low-reflection surface-treatment film at low cost, according to Sharp’s press release. This technology applies not only to TVs but also to tablets and digital signage. In addition, applying the film on show windows and other glass prevents the reflection of light from illuminations.

Full HD in the palm of your hand
Sharp is also exhibiting a new line of 5-inch 1080p (1,080×1,920 pixels) LCD panels for smartphones. Featuring CG-Silicon technology, a new pixel design, and a new production process to achieve the same number of pixels in a smartphone as in a 1080p LCD TV, the panel has 1.3 times the pixel density of conventional LCD panels.  Production of these new screens started at the end of September, with full-scale production beginning later this month. No pricing information is available.