As the founder of the largest German computer corporation SAP, he sold his stakes and invested part of it in regional sport clubs. While Adler Mannheim became German ice hockey champion in 2019 and the Rhine-Neckar Lions won various handball cups, the TSG Hoffenheim football team qualified for the German Bundesliga in 2008.

As the majority shareholder of TSG Hoffenheim, Hopp was criticised by fan groups who believed he would commercialise soccer. In some stadiums, soccer fans even presented his portrait in the crosshairs. At the FC Bayern against TSG Hoffenheim match in late February, the protests of Munich-based Ultra hardcore fans almost led to the termination of the Bundesliga game. 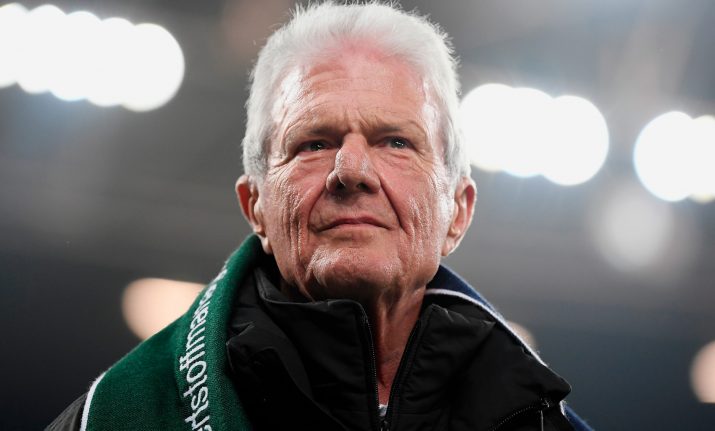 Dietmar Hopp: “We have common rules, both on the pitch and off it”
Photo: Getty Images. With permission of SPORTS1.

Meanwhile, all Bundesliga matches are currently suspended due to the coronavirus outbreak. Now, it is up to visionaries like Hopp to hopefully enable the research for a vaccine so that Bundesliga games may also be continued.

For Hopp, the majority shareholder of German biotech company CureVac, it is not an option that the German company develops a vaccine which would be used exclusively in the US. “I didn’t talk personally to Mr Trump”, Hopp emphasised in an interview with the German platform SPORT1. “He spoke with the company and that was reported to me right away. I was asked what I thought about it and I knew immediately that this is out of the question.”

In the SPORT1 interview Hopp also welcomes the fact that the UEFA Euro 2020 is postponed. “The advantage is that there won’t be any club world cups. From my point of view, this tournament is unnecessary.”

The Bundesliga is currently suspended due to the corona pandemic, initially until 2 April. What’s your take on the DFL’s decision?

“This suspension is absolutely necessary, because the health of the public must take precedence. There cannot and must not be any debate about that. Football can’t cut itself off from society – and we would do well not to claim any special treatment in this absolute crisis and in this exceptional situation.”

The representatives of the Bundesliga clubs would have preferred another solution with reference to the financial consequences and burdens.

“There are innumerable small and medium-sized companies in this country facing these problems, and many people are having to accept tremendous restrictions and strains. What applies to football applies to them too: this is the moment for solidarity. The stronger must help the weak.

“I highly sympathise with the idea of a solidarity fund to combat this exceptional situation. No ideas must be taboo here. We at TSG will certainly come up with an idea as to how we, the club of this region, can make a contribution in this emergency situation.”

The crisis that has been caused by the spread of the coronavirus does not appear surmountable. Social life has almost come to a standstill, while all major sporting events including the European Football Championship and the Olympic Games in Tokyo are hanging by a thread.

“We will – as much seems clear to me from my many discussions with virologists, researchers and experts – need to have a lot of patience. A virtue that is not a given for everyone.”

You yourself have shown great patience. You’ve been the main investor in the company CureVac almost since it was founded and you’ve invested more than €150 million in the firm since 2006. Now the Tübingen-based company is suddenly known across the world because it is researching into a vaccination for the coronavirus Sars-CoV-2.

“Most of the people are not overly aware of my private financial involvement in the biotech sector, even though I’ve already invested around €1.5 billion across a range of start-ups in this segment. I invested in CureVac back when it was still a very young company because it had, and still has, innovative ideas and scientific approaches as regards the development of vaccinations.

“The hope at the time was that we’d be able to find a cure for cancer. We want to make a contribution to stopping such an awful illness. That was and remains my motivation.”

US president Donald Trump offered the researchers a great deal of money that they move from Tübingen to the US.

“We want to develop a vaccination for the whole world and not for one country, not for certain classes and not for certain parts of the planet. This vaccination, once it has been successfully developed and tested, is not to be an instrument for speculation or power; rather, it is to help to contain a global crisis. That’s my wish.”

In that regard, you must have been hurt even more by the accusations in soccer stadiums where some Ultra groups characterised you as the ‘face of commercialisation’.

“I started playing football at TSG Hoffenheim, my hometown club, as a 14-year-old lad in 1954 – following the Miracle of Bern. Thanks to special medical authorisation, I was then allowed to play for the TSG senior side as a 17-year-old and was even still involved while I was a student in Karlsruhe. It really does require a vivid imagination to see me as the embodiment of the commercialisation of football.”

Later on, when you became Chairman of SAP you supported the club.

“I started to provide my hometown club, which had just been relegated to the A-Class, with financial support in 1989 – first and foremost to promote youth work. That was my condition. Just to reiterate once more: we’re talking about the year 1989, when the GDR still existed.”

The parties in question gave the impression during their protests that TSG is a plaything for you personally.

“The original idea to have a Bundesliga club in the sport-mad metropolitan region of Rhine-Neckar again was a long-standing wish of the Sport Working Group in the region. I informed them of my willingness to actively contribute to this idea and to support it.

“As a Regionalliga club, TSG was at that time highly qualified in sporting terms and boasted exemplary youth development work. So it seemed obvious to strive towards fulfilling this vision with TSG Hoffenheim for the entire sporting region. When we signed Ralf Rangnick in 2006, our plans to reproduce what the youth teams had achieved and to get our senior squad to the Bundesliga went up a notch.”

However the club is on an outstanding financial footing. SAP’s sponsorship is below six million euro per year and therefore in a midfield position of the league.

“But thinking economically and acting in a financially sound manner doesn’t necessarily mean that you’re disregarding values such as solidarity or fairness. They are by no means mutually exclusive.

“For me, Paragraph 14 of the modified German Constitution has always applied: ‘Ownership creates obligation, wealth does even more so.’ Hence why I’ve done things privately and, in around two years time, my foundation will have made the total sum of €1 billion available to society. And that’s how I also see my involvement in football, even though unfortunately many other people don’t want to see that.”

Do you understand the criticism on the commercialisation of soccer?

“When it comes to the topic of commercialisation in football, I’d recommend casting your eyes back: Borussia Dortmund KGaA is to date the only stocklisted limited liability company in football; the IPO, which came in 2000 at the time of the supposed ‘new economy’, brought in a figure in the three-digit million range. 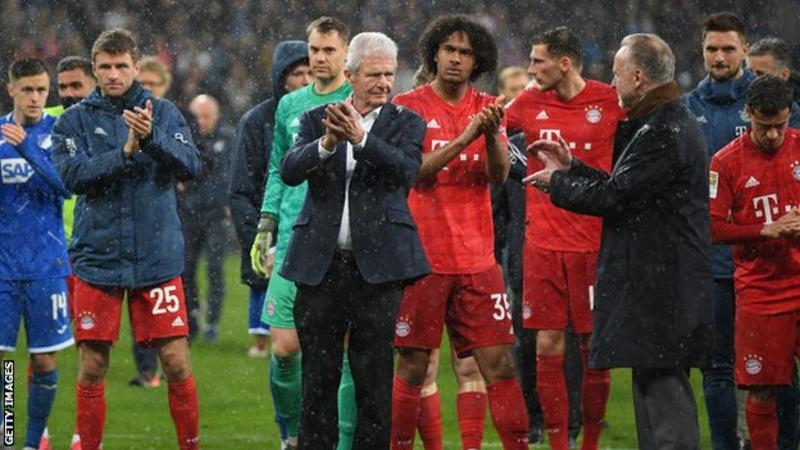 TSG sponsor Dietmar Hopp (centre), FC Bayern chief executive Karl-Heinz Rummenigge and both sets of players show solidarity on the pitch at the end of the Bayern vs Hoffenheim match on 29 February
Photo: Getty Images. With permission of SPORTS1.

At this point, TSG Hoffenheim were playing in the Oberliga against FC Teningen. Four years later, when BVB was on the verge of ruin, a dubious financial juggler – and that is putting it mildly – invested €20 million in Borussia for a 25% share.”

Almost three weeks have passed since the most recent attacks on you personally. How are you doing and what are your hopes, generally speaking, for the future of football at this time?

“First and foremost, we all wish – completely independently of football – that the global community effectively combats the corona pandemic and that we all overcome this challenge together. That’s the absolute priority.

“As far as I am concerned personally: obviously I know that treatment in football grounds can be rough from time to time. But I am not equating this with emotional insults at a football stadium. I don’t need to and cannot tolerate that. These are concerted and prepared actions, banners and threats.

“The advice of letting it in one ear and out the other is something I have heeded for many years. But it has not changed; quite the contrary, in fact. It’s got massive. But all of that is not going to prompt me to abandon my path of social and sporting involvement.

“I would just like to emphasise one thing: in football we have common rules, both on the pitch and off it. Both we as TSG Hoffenheim and I personally have strictly abided by the rules, in the case of 50+1 for example. But if I now – as some of the Ultras seem to be doing – protest against these rules, then I also need to speak about these rules as well.

“If, instead of doing that, you attack a club or an individual person who have abided by the rules, then you are completely missing the point. Over the course of recent weeks, I’ve often had to read: ‘The old, white man, the billionaire, has special protection.’ To that I say: No I don’t want any special treatment. But I don’t want to be penalised just for being almost 80 years old and wealthy. I just wanted to be treated like a normal person.”

Additional reporting for this story was supplied by SPORTS1.