Match of the Day studio Dock10 marks a decade in broadcasting 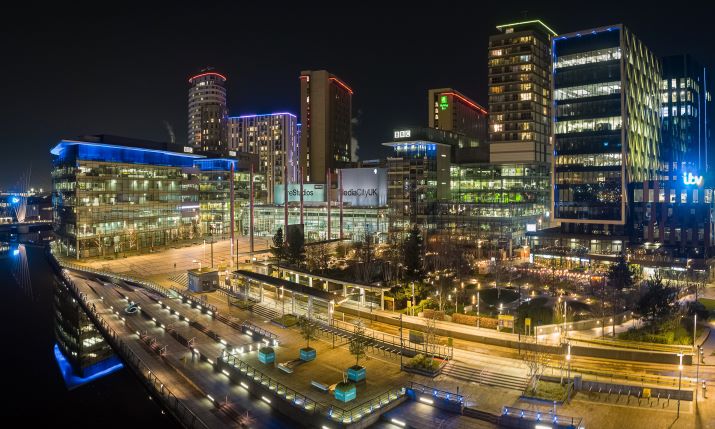 Dock10 is celebrating a decade in broadcasting in 2021. The television facility, based at the heart of MediaCityUK in Salford, has enjoyed a decade of growth, development and success since its inception as the BBC sought to push out of London.

The origins of dock10 lie in the BBC’s plan to move key elements of its television operations, including BBC Children’s and BBC Sport, from London to Salford Quays in Greater Manchester. This established the need for a major television facility that could support the creation of world-class content outside of London.

“We have come a long way in the past 10 years,” said Mark Senior, chief executive, who has been with dock10 since the beginning. “Dock10’s facility opened in January 2011, but at the time MediaCityUK was a building site in the final stages of completion with no people or shops let alone any television or radio production.

“Today, thousands of people work here and every year we make hundreds of hours of television in our studios and post-production facility and the site has become the major UK regional hub for television production.”

The first television show made at dock10 was the game show Don’t Scare the Hare, presented by Jason Bradbury. This featured a four-foot animatronic robot hare, voiced by Sue Perkins, that played host to two teams of contestants, six giant alarm clocks, 50 angry frogs and an allotment-full of laser beamed carrots.

“Since opening our studio doors, thousands of shows have been made here and we’re very proud of the enormous diversity of programming we work across,” comments Andy Waters, head of studios. “These range from primetime Saturday night entertainment such as The Voice through to comedies, quizzes, music and children’s shows to extensive sports output and live events such as Sport Relief and The ITV Election Debate. Our client base includes many parts of the BBC, ITV, Channel 4 and Channel 5, as well as numerous UK and international independent production companies and the streaming market.”

The Queen officially opened dock10 in March 2012. Her Majesty and the Duke of Edinburgh were given a tour of dock10’s facility by Mark Thompson, the then director general of the BBC, and John Whittaker, chairman of The Peel Group which developed MediaCityUK. The visit included watching high tech rehearsals for Football Focus, meeting presenters in the suite of studios used for CBBC and a concert performed by the BBC Philharmonic in the purpose-built orchestral studio.

Since then, dock10 has continued to invest in additional studio facilities and has significantly expanded its post production capacity, most notably by building a boutique-feel post production hub, The Quay.

“The Quay was specially designed to incorporate our new VFX capability and meet the growing demand for out-of-London services,” stated Ian Dodd, head of post production.

dock10 post produces a wide range of content that includes much of the work filmed in its studios, as well as major television dramas such as the multi-award-winning Happy Valley for the BBC and The Stranger for Netflix Originals. In addition, dock10 works on many current affairs programmes as well, delivering TV and social media content for the agency and brand markets.

“We’ve worked hard to build an excellent reputation, and to see the content we post produce win popular acclaim and awards is extremely satisfying,” added Dodd.

The past 10 years have seen dock10 at the forefront of a transformation in the way television is made. “We have not only broken out of the London-centric approach,” noted Paul Clennell, chief technical officer, “but we also set a new standard for television facilities with a once-in-a-generation investment in market-leading technology and infrastructure. And we continue to constantly upgrade and invest to keep us and our customers at the cutting edge of television production.”

Among the most recent major improvements have been the installation in 2018 of a groundbreaking 200GBps network that is smoothing the way for 4K UHD HDR television and dock10’s pioneering use of virtual studio technology with the capability to create otherwise impossible to build photorealistic sets.

In early 2020, dock10 found itself supporting the industry through the particular challenges of the global COVID-19 pandemic. dock10 remained open throughout, with operations adapted to ensure appropriate safety measures and some significant changes to established production norms, most noticeably filming major entertainment formats without an audience and utilising innovative remote workflows.

“With COVID-19, the industry needed new ways to deliver television, and our facility was already equipped with the tools our customers needed,” said Clennell. “Our ability to offer remote post-production across multiple genres, virtual studios to enable creative shoots and remote galleries to make live sports more accessible were invaluable to clients. These solutions enabled BBC Sport to broadcast the 2020 FA Cup final live and supported the rapid rollout of BBC Bitesize Daily, which helped keep children learning during the lockdown.”

“Our customers expect the latest technology innovation,” noted Senior, “but the feedback we get most from our customers is about our exceptionally high standard of service. We have not only built a world-class facility we have also attracted world-class talent and the very best people to work here. It’s the dock10 team that I am most proud of.” This extends to dock10’s commitment to nurturing the next generation of television talent through working with local schools and universities, promoting STEM subjects and offering a range of work placements and apprenticeships.

As dock10 marks 10 years in television, it can look back on an impressive catalogue of programmes that have been made in its facilities. These include household favourites such as Match of the Day, Blue Peter, Countdown, A Question of Sport, BBC Sports Personality of the Year, Jane and Friends, Watchdog, Who Wants to Be a Millionaire?, Dragons’ Den, Let It Shine, Judge Rinder, University Challenge, Happy Valley and The Stranger.

“We are immensely proud of all we have achieved in the past 10 years,” said Senior, “and we are looking forward to the next 10 years. With television evolving at such an incredible pace, it’s hard to imagine what production will look like in 2031, but I know that whatever it involves, dock10 will be at the forefront of delivering the very best service, using the very best technology from right here in Manchester.”