Dorna’s MotoGP innovations fuel the need for broadcasting at speed 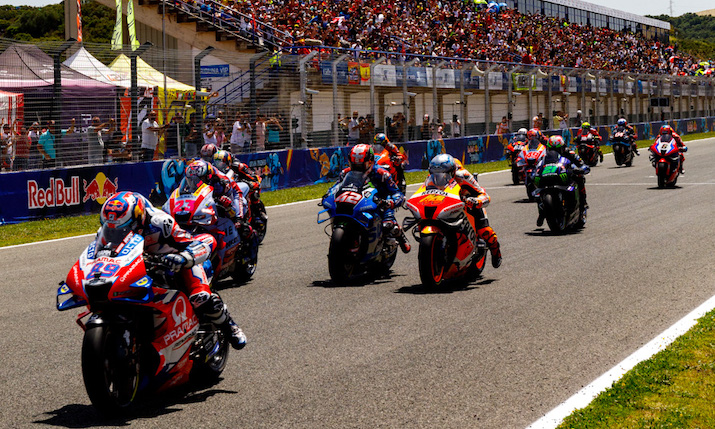 “Back in 1992, we were travelling all around the world and didn’t really have any broadcast resources. We were just 15 people,” says Sergi Sendra i Vives, head of global technology at Dorna Sports. “We now have the privilege and the opportunity to manage [MotoGP] from end to end, from acquisition to distribution, but when we had to start doing the production, we didn’t realise what a sport like this would demand. It’s special and unique.”

Since taking the reins of the FIM World Championship Grand Prix (MotoGP) in 1991, Dorna Sports has also been its exclusive commercial and television rights holder. When SVG Europe was granted access to the MotoGP race in Circuito de Jerez-Angel Nieto in Andalucía, it was clear to see how far the Spanish company has come. Situated in a paddock surrounded by ranks of trucks and travelling garage facilities for the top racing motorcycle manufacturers in the world, Dorna TV was playing host broadcaster to the likes of BT Sport, DAZN, Sky Sports, Canal+, Ziggo Sport, ServusTV and RTVE, with a total of 187 cameras around the track, on shoulders and on bikes. There has been a lot of work and innovation to get here and, according to Sendra, there’s more to come.

‘MotoGP’ isn’t just one race, it is a 20-event season that visits 16 countries across four continents, showcasing the planet’s fastest motorcycle racers in its three categories comprising the Moto3, Moto2 and MotoGP World Championship. It was a global travelling tournament back in the early 1990s too, but the broadcast set-up then was bit different.

“Seven people were taking care of the TV. We were recording the signal from different broadcasters who were creating the content in each country, such as Channel Nine in Australia, the BBC in England, and so on,” recalls Sendra. “Every country did a different job in terms of TV coverage. It was really chaotic.”

Rather than put up with such inconsistencies, the team, led by Manel Arroyo, then managing director of Dorna Sports and MotoGP, decided that it would be better to standardise the coverage.

“We started to define a way to do the same job for everyone in the world independently of the circuit,” says Sendra. “We started contracting our own camera crew with experience and bringing them with us. Being responsible for providing content to the broadcasters, we realised that we should be part of the decisions to make the tools better and adaptable to the sport.”

Arroyo, who came from a TV sports production background and is now Dorna’s chief commercial officer, believed that if Dorna didn’t control the cameras, it would not be able to develop them further. He also proposed that Dorna take control of the timing software for the race.

“Timing data is such an important and key factor for MotoGP,” says Sendra. “In 1999, this was in the hands of a third-party company, so we decided to acquire that. Thanks to all these decisions, we are now a company that has software developers, we have hardware developers, we have people who know audio and video mixing, and people who know how to use metadata and data processing.”

“Being responsible for providing content to the broadcasters, we realised that we should be part of the decisions to make the tools better and adaptable to the sport”

Sendra’s role was to design a new methodology to cover the races and help create a standardised model for the editorial coverage.

“There was only one master control room for everything and a feed from the cameras on the track. In the beginning, it was very expensive, complicated and challenging, because you had different combinations of circuits,” he recalls. “But, at the end of the day, you can simplify all the circuits into [riders] doing laps in a circle that is full of obstacles. So we found an easier way to monitor that.”

“In a baseball or football match, one camera can cover everything,” he continues. “In MotoGP, you cannot see everything, you have to create segments where one to three cameras will be able to see a shot.”

You can see the result when standing in the track feed control room in the Dorna TV compound ­– like the output from the audio control room (ACR) across the way, the cut from here is folded into the international programme feed (IPF) next door. The screens showing the feeds around the race, though arranged in a rectangle, simulate a circular concept for the tracks, with the camera numbers running in a clockwise direction to follow the action. 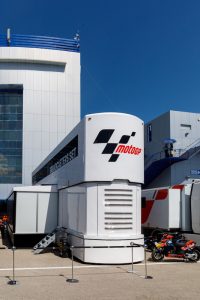 The race coverage is heavily focused on certain points. “The straight is the busiest place because this is where the finish line is, where the grid is, everybody needs to go through this point to accomplish their goal,” says Sendra. “We also define every camera position in terms of advertising. Then there are the hotspots, such as the turns, which we cover from different angles to make sure that we capture it all. But you have to reconnect all the segments to recreate the sensation of continuity.”

Watching the track feed live at Jerez, for example, we could see cameras 9, 10 and 11 consecutively showing a bike approaching a corner, the zoom lens shot of the bike on the corner capturing the heavy braking, and then another view from the inside of the track as the bike accelerates out of the corner.

In this way, Dorna can tell the story of each race in a logical, templated fashion, with all the action – and advertising – on-screen. But it’s not the whole story; there are other elements in play. There is input to be selected from the helicopter camera, the shoulder-mounted ENG teams that film the action in the pit lane and the team boxes, and on-site press conferences. All this content is overseen by the race director in the IPF.

There are also feeds from that major MotoGP innovation, onboard cameras, of which there are four per bike. One is situated at the front (pointing forwards), one on the rear (pointing backwards), a ‘butt’ camera and one mounted near the rider’s dashboard, pointing towards the rider when they are on the bike. In addition, at least one rider has a camera fitted with Dorna’s gyroscopic, 360 pan-motion and auto-tracking solution, allowing for live 360 broadcasts.

“The bike is a key element in MotoGP,” adds Sendra. “It’s complex, taking all the energy of hundreds of mechanics and engineers. They don’t want their bike to be a camera studio, so we had to concentrate and see how we could develop systems as professional as those they dedicate to their bikes. That was the reference for us: if we wanted to install a camera on a bike, we couldn’t come with something that is not at that level.”

Similarly, Dorna has been keen to mic up and monitor the rider. “We have already innovated here, installing microphones, installing sensors, and installing heartbeat devices, all to tell the human part of the story,” Sendra says. 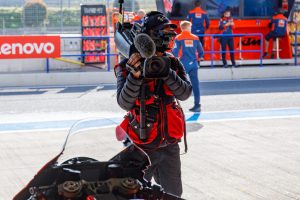 Dorna has cameras everywhere on the circuit, in either fixed positions or roving across the event

The innovation extends onto the track feed infrastructure, which has to be rigged – and de-rigged – each time the race moves to a new circuit. “We have more than 25km of SMPTE fibre cables installed,” says Sendra. “We have been simplifying and improving this. For example, we have five hubs and each hub has five cameras, so rigging is very fast now because we are installing more and more hubs. Our new Sony cameras have Gigabit Ethernet networking so that the camera becomes a hub; you can extend more microphones and you can install more equipment on the network from that endpoint. That was impossible two years ago.”

Then there’s fibre. “Normally the fibre that you will buy as a production company has 12 cables. We got a company to build it with 72 cables for us,” Sendra reveals. “We can save tonnes of hours installing with this fibre. We are always thinking how to minimise, how to simplify the logistics.”

“Audio is a key matter to Dorna,” Sendra states. “And it will become even more important.

“Microphones already go in the pit lane and on the grid, this is something we could improve and Audio-Technica is helping us with that,” he continues. “We will soon be able to listen to people in the garages. There’s still a need for secrecy, as obviously, the teams don’t want us to broadcast what they say when they decide on a tyre, or a strategy. But we want to capture those scenes where it’s not so critical, to have more audio sources to let the viewers listen to what is happening.”

Audio innovation has also been deployed for MotoE, the electric bike World Cup that races at several Grands Prix throughout the season.

“In terms of video, we use the same onboard system in MotoE as in MotoGP, so you get the same sensation,” says Sendra. “For the audio, the onboard camera is now going to carry new microphones designed and manufactured by Audio-Technica. This allows us to have access to a signal and to listen to something that we couldn’t [previously receive]. So. in MotoE, when there is a crash, or shouting, or people talking, the viewers can hear that for the first time.”

Notifications abound, for good reason. “We can’t just do three laps with the onboard camera; if you don’t also have shots from the cameras on the track, you will not be able to see the sponsors of the bike. We also have a counter to say how long we are with the helicopter, with onboards and with track feed. So that balance is something we are analysing.

“AI is going to change the way we manage the content, the way we grab the audio, the way we transcribe interviews. With AI we could start creating clips out of what we are already watching,” he continues. 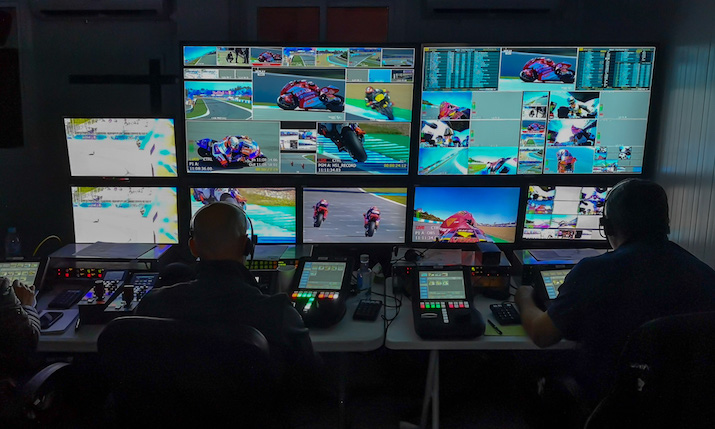 Take replays, for example, another area used to innovation. “In 2010, we reached an agreement with Grass Valley [to deploy a customised K2 Dyno replay system],” Sendra explains. “We decided that as those guys are [logging and keywording], they would not only select clips for replays, but also select clips to send it to the archive as part of the content that host broadcasters can use. We want to make sure that everything that was interesting is selected, archived with metadata and, at the end of the weekend, you have everything ready in the file management system.

“At the moment, people on the replays only choose the most important moment, but we are still missing things,” he continues. “Maybe you have six riders doing the fastest lap but [the human operator] will only go for the first, second and third. The AI will be able to jump into this arena to improve the way we select and identify and create even more content.”

On the road again

“MotoGP is a circus with a story that is always changing,” says Sendra. “We are constantly changing the script. There are always things happening that are not on the screen, so we analyse them and always need to be ready for improvisation. It’s very tiring, but it also makes the job very exciting.”