DVS’ Superloupe slows down the action at Tour de France 2019 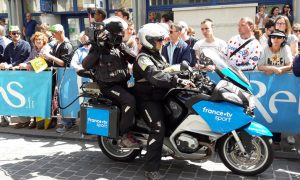 Following four years of development, the SuperloupeRF On-Board camera, which is designed exclusively for use by camera operators on motorbikes, was used last year for the first time at Tour de France. The company gathered feedback from its use then and continued to develop it so that it was ready for use this year.

Commented Guillaume Margon, head of business development for Superloupe R&D at DVS: “This year the SuperloupeRF On-Board camera has been significantly improved by our engineers in collaboration with the cameramen and directors [from last year]. After using the SuperloupeRF On-Board camera last year at Tour de France, camera operators and directors asked us for a number of things, including to make it lighter so we have got it down to 500g, and to adapt the viewer to make it easier to use while wearing a helmet, and also to change the grip, which we have shortened to help balance the cameras. It can now be used on the shoulder as well as in the hand, as required, and is more balanced.”

The motorbike camera operators have significantly more control over the camera than before, added Margon: “Unlike the way of working on other sports where it is the EVS operators located in the OB van who select slow motion, here it is the motorcycle cameramen of the Tour de France who decide and trigger the slow motion directly from the camera.

“The On-Board camera brings us very aesthetic images where we see the effort the movement of muscles, of the legs, of the calves, of the knees. We also have images of heat and perspiration. It shows things we are not used to seeing.”

Jean-Maurice Ooghe, director of Tour de France, commented: “The On-Board camera brings us very aesthetic images where we see the effort the movement of muscles, of the legs, of the calves, of the knees. We also have images of heat and perspiration. It shows things we are not used to seeing. I would almost say that it allows you to see the invisible, in a way.”

This camera replaces the standard camera used on motorbike number four, used at the head of the race.

Aram Novoyan, general manager and inventor of the Superloupe, said: “The advantage of being able to replace a standard camera on the motorcycle makes it possible not to impact, or[impact]  very little, the cost of the production.”

Margon went on: “On Tour de France there are five motorbikes being used to capture the action. Motorbike number four is the one using the SuperloupeRF On-Board camera at all the stages of the race; it is right behind motorbike number one, at the head of the race in the heart of the action, while the other three bikes are further back.” 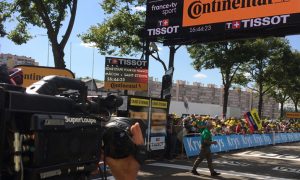 Immersed in the peloton

Viewers of the Tour de France are able to be immersed in the peloton, watching details slowed down to 300 frames per second (fps), as seen last month at Roland Garros or in major football matches. This is because the SuperloupeRF On-Board camera uses a multimatrix of 24 points, significantly above the standard used by other ultra motion cameras which uses 16 points, which creates a picture quality of finesse with faithful colours.

Also this year, DVS has trained eight camera operators on the use of the on-board camera. Last year the operators were not trained as there was not time, according to Margon. This year they are able to understand how to get the most out of the kit, he noted.

Already DVS has received a little more feedback on the SuperloupeRF On-Board camera, although Margon stated they were minor requests which the company will work on post-event. 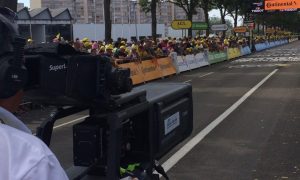 DVS is also supplying a Superloupe Sportcam to capture the arrival of the racers at the end of each stage of the race, behind the finish line. The Superloupe Sportcam is equipped with the latest Canon lens, the 122x UHD, providing the longest existing focal length available (up to 2000mm thanks to the doubler), and Margon added: “while maintaining a wide focal length and a high resolution perfectly adapted to the large sensor (19.2 × 10.8) of our Superloupe and with low ramping”.

Tour de France directors Jean Maurice Ooghe and Anthony Forestier are at the heart of this system, set up by event organiser, Amaury Sport Organisation (ASO). The directors participate in the editorial development, and also push the technical development, of slow motion and ultra slow motion, said Margon.

Margon said: “Jean Maurice Ooghe the director decided to replace a Loupe 75fps with a Superloupe. This allows you to shoot the arrival [of racers] at high speed, up to 1000fps sometimes on sprint.”

Ooghe stated: “The two cameras in a fixed position at the finish allow us to capture the emotion of the winner, his joy, the intensity of the sprint. It’s very interesting because we see in detail everything that’s happening on his face.”

Margon continued: “Because this camera’s focal range can be used at a distance, we are able to follow the sprint to compete to get over the finish line first. We can see the fight going on, and the winner’s expression, in slow motion; just after the finish is shown live, the directors are using our slow-mo version often, and commentators are also using it in their analysis discussions.

“[As it is ] lightweight, it then [can be moved] quickly to the podium to shoot the emotions of the winners,” he added.

DVS is also providing one EVS and one standard Sony slow-motion camera at 75fps when required on the different stages.

Concluded Margon: “Our teams of engineers follow each stage, bringing their slow-motion expertise and thus ensuring the best performance from start to finish on the Champs Elysees. They are used to these major events since they work for many years on the Olympic Games, FIFA, UEFA, Formula One, Roland Garros.”