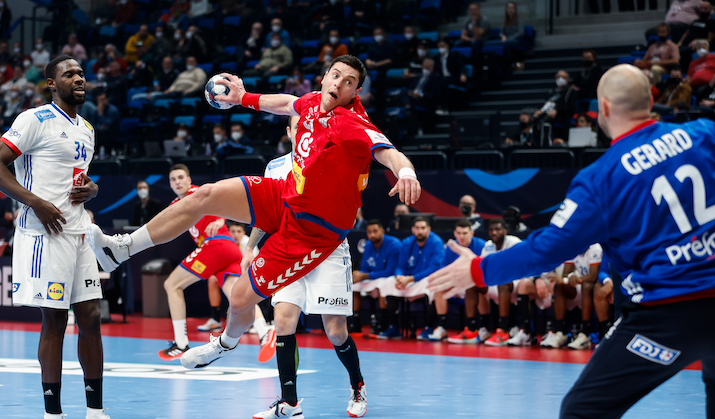 Leaping for joy at the France vs Serbia handball match, Men’s EHF Euro 2022 in Slovakia

According to Thomas Schöneich, director of media and communications at the European Handball Federation (EHF), this year’s Men’s Euro tournament is all about engaging younger generations and bringing them into the EHF ecosystem.

A number of new initiatives, developed with partners DAZN Group and Infront, including social media partnerships, an app, watch alongs and extensive live global coverage, are helping to achieve just that.

Schöneich explains: “What is really brand new and a first for this championship is our presence on Twitch and our enhanced presence on TikTok. We were in the very fortunate position of being able to sign a partnership deal with TikTok just before the championship and that has quite significantly helped our presence in that regard.”

The EHF has also launched an overarching app under the name of Home of Handball. “We have moved away from having dedicated event apps,” Schöneich says. “Now all our events – and that relates not only to national team events, but also to club competitions – are under this one umbrella app. On our platforms, we have also launched, as a follow up on last year’s Women’s European Championship, what’s called a hyper casual game, which is basically a shoot-out game that you can play very quickly.

“The one key focus here is reaching out to younger generations and picking these people up where they are and trying to bring them into the entire ecosystem, rather than just hoping that they come to your platform. To do this, you have to have a reasonably large ecosystem.”

“The big challenge is to reach new people outside of your bubble. What DAZN, Infront and EHF really tried to work on is to find these synergies and this obviously allows us to reach new audiences”

Other initiatives include a podcast produced in partnership with established podcast, the (Un)informed Handball Hour, with the aim of bringing the audience to the championships. EHF, together with DAZN Group, is also running a dedicated influencer marketing project for the first time featuring figures from the world of handball, such as former player turned influencer Victor Melida (better known as Viruzz), and those outside of it.

A watch along on Twitch with Melida and Spanish international Alex Dujshebaev has garnered more than 2,500 views, while Schöneich also cites the example of Damián Quintero, a karate silver medalist from Spain, who the EHF brought out to the event. This allowed the EHF to reach his audience and led to Spanish TV coming on site.

“The big challenge is to reach new people outside of your bubble,” he says. “What DAZN, Infront and EHF really tried to work on is to find these synergies and this obviously allows us to reach new audiences.”

DAZN Group’s head of digital EHF rights partnerships, Robin Kolmel, adds: “When you’re looking at reaching new audiences, channels like TikTok and Twitch give you the option of doing things differently. We’ve been working with EHF on developing a digital strategy that takes fans on a new journey and offers new ways to engage with the sport. Our digital campaign ‘Battle for the throne’ integrated a variety of social media filters and campaign video formats across a host of channels, each publishing targeted content for that audience. It’s all about breaking out of the usual channels and creating a campaign that speaks to multiple target groups.”

Although the tournament is ongoing, with the final set to be played in Budapest on Sunday 30 January, the results have already been impressive. The app has been downloaded more than 50,000 times, up 30,000 since the tournament started on 13 January. The Home of Handball TikTok account has grown by more than 80,000 followers over the same period, reaching 260,000 followers.

“The key is that for every platform, we are developing bespoke content. There’s very little content that goes in the same fashion on, let’s say, Instagram and TikTok at the same time. This is very important in terms of content,” he adds.

Much of the content produced comes from the EHF’s partnerships with Infront and DAZN, with the former’s production arm, Infront Productions, focusing on live production and additional clips and DAZN responsible for postproduction and digital content.

“There is a lot of content which is produced as part of this partnership, including daily highlight clips and near-live clips, which is then distributed to us and to our partners. So not only do these clips get distributed through our platforms, but they also get distributed to the federations, to players and to publishing partners, which DAZN has sourced. And again, it’s all about reaching beyond the existing bubble of handball fans,” explains Schöneich.

DAZN’s post production team in Madrid are tasked with producing those near-live clips and highlights, utilising an artificial intelligence-based clipping system from WSC, which was first used at the 2018 Women’s European Championship. Content distribution is managed by Socialie software. 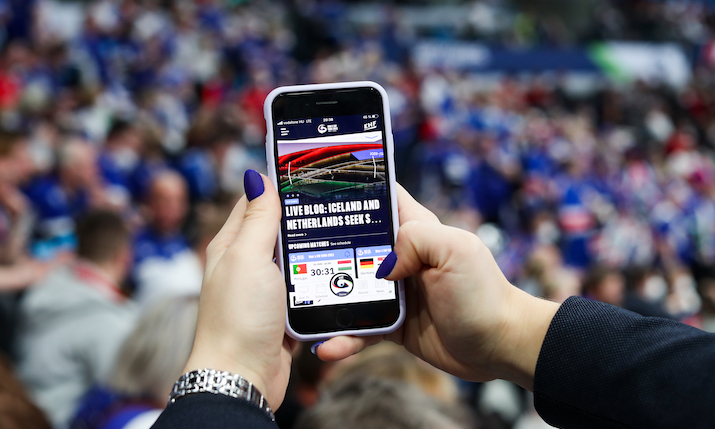 The EHF has launched the Home of Handball app. All pictures: EHF/kolektiff

Birgit Schiller, senior project manager at Infront Productions, explains: “We always have a so-called pre-multilateral running order and a post-multilateral running order where we play out dedicated content. One example is the team’s arrival footage and arrival interview. For some broadcasters it’s important to receive this kind of content as soon as possible because they use it for teasers and in the background of the programme, so if we wait until it’s played on the world feed, it’s already too late for broadcast partners. Therefore we start the transmission time via satellite minus-40 minutes to throw off. We also upload this content on to the content platform, so it’s available earlier.

“For half time and post-match, we do these packages with the best of super slowmo’s, iso angles and we call it best of emotions, but also images you can use for trailers and some more artistic content broadcasters also like to use.”

To achieve this, there’s a comprehensive camera package at each match, including a few new additions for 2022 and a greater focus on VAR.

“What we tried to implement this year is to have more transparency when it comes to the video replay situations,” she adds. “We have developed something together with the EHF as a first step to make it more transparent with picture in picture, with graphics terminology we agreed on which are in place. This is still a work in progress, it’s just the first step, but it’s the biggest enhancement.”

“In terms of production standards, we enhanced the camera plan so we have more cameras than in 2020,” Schiller continues. “We started with 13 for the preliminary rounds, 14 for the main rounds and for the final we’re going to have 19. We’re also including a few special cams and we’re going to use a Steadicam for the final weekend. We have only worked with regular handhelds in the past, but this time we’re integrating a Steadicam for different angles, especially when it comes to walk in, anthems and the ceremonies.

“I’m always saying you can go with a crazy number of cameras, but handball is a super-fast and dynamic sport and, for the viewers, it’s important to show the live action, so you have to be careful with how and how often you use special cams. It’s also important to ask ‘is it better, does it add additional value’? This, for me, is always the biggest question.” 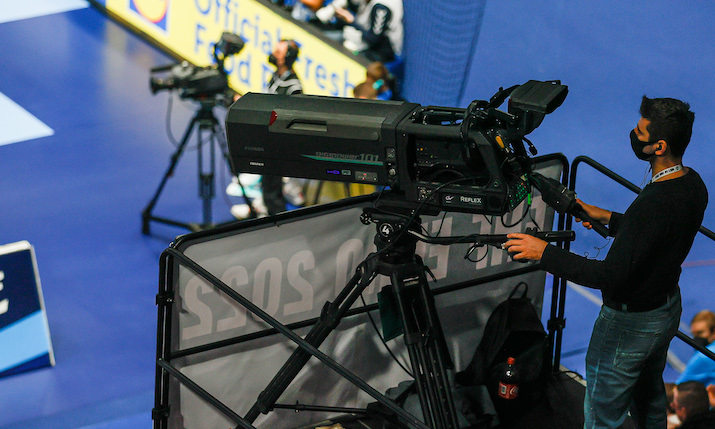 The Infront team have been on site throughout the tournament

There are, however, areas within handball that could benefit from additional cameras, believes Schiller, but this isn’t always feasible.

“We have restrictions like the catch net, which we have to hide behind and we actually have the lens through the catch net, which makes our life much easier. We would like to elevate this camera, but this has so far been challenging. So our aim for the future is to find solutions and maybe even find new camera systems where you have the chance to show different angles. Together with the EHF, we will work on certain principles and maybe change some regulations if needed. The safety of players always comes first, that’s for sure.

“One of our directors would love to have a camera on a track along the sideline. But we see how dynamic handball is, how often players fall and slide over the court and then this can become dangerous. We have plenty of other ideas in mind and we want to discuss with special cam suppliers what is customisable. But there’s definitely the ambition to find other specific angles to bring the action closer to the fans at home.”

With matches often played back-to-back and with handball being such a fast-paced game, time is often in short supply so using content from all the cameras often isn’t possible either.

“It’s a shame because we have three super slowmo cameras in place and there will be a fourth one at six-times super slowmo for the final weekend. The content they provide is just amazing. The camera guys are super talented, they have great framing, but sometimes you just lack the time to show replays because by nature, the sport is too fast to insert these,” she adds.

“Handball is a super-fast and dynamic sport and, for the viewers, it’s important to show the live action, so you have to be careful with how and how often you use special cams”

Although handball leagues such as the Bundesliga in Germany have opted for remote production to produce matches, the Infront Productions team are on site in Budapest and Bratislava for the duration of the Euros.

“Remote is in everybody’s head right now,” says Schiller. “But it is also always a question of resource optimisation. It’s a question of bandwidth, of how our venues are connected or other technical considerations, and we’re working across two countries. We are not there yet with remote. It’s something that needs a long-term strategy, and even then, you will still need people on site; you still need the camera operators. So for this event, remote is not yet in place; we are looking into solutions for the future.”

Schöneich concludes: “We’ve had remote solutions in the past and one before COVID. One remote solution was having our commentators actually commentating off tube from Milan up until the last men’s Euros in 2020. At that time, not related to COVID, we made the deliberate decision to bring these commentators on site again because for us it’s important that you convey the experience. I think this pandemic has shown us that we are able to do more and more things remotely.