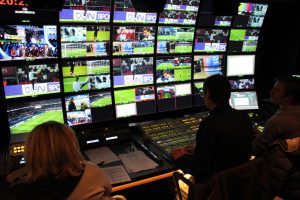 The newly upgraded A21 OB truck operated by Euromedia

The rise in interest for 4K UHD coverage has prompted Euromedia, a technical services provider, to make the move to 4K UHD in both its A21 and B40 OB trucks, by expanding the capabilities of its Kayenne K-Frame Video Production Centre switcher from Grass Valley, a Belden Brand.

Jan Pieter van Welsem, vice president of sales and marketing, EMEA, at Grass Valley, explained: “Euromedia replaced its K-Frame-C (compact) with the K-Frame-S (standard) in both of these OB Vans. The primary benefit is the increased I/O capacity to enable UHD. The Kayenne K-Frame boasts the largest I/O footprint on the market when fully loaded at 192 x 96, which enables >48 x 24 in UHD. Sports production, more than most types of television, push top-end broadcast switchers to their max, but Grass Valley switchers are built for just this requirement.

“In addition, Euromedia upgraded from 4 M/E to the maximum of 9 M/Es on the Kayenne K-Frame.  Because of the demands of UHD and having to quarter the internal resources, operators lose M/E count currently. But by fitting extra M/E cards to the frame, we can increase our UHD M/E count to four, creating more sub mixes, which is essential for top-end sports production. This upgrade also provides more picture in picture elements to the production, making it all the more engaging for viewers.”

He added that Grass Valley’s portfolio of solutions is designed to grow and expand as customers’ needs change. “As many broadcasters move to UHD, they need a switcher solution that enables operators to truly cut a 4K show just as they would an HD production, but now with significantly more horsepower. And, they have the ability to switch back and forth between HD and UHD as needed.” 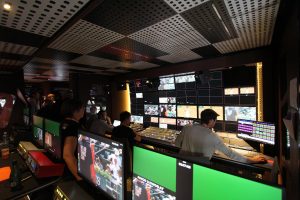 As to why this equipment was chosen specifically, van Welsem stated: “The Kayenne K-Frame has the biggest capacity in terms of I/O for UHD TV currently available on the market, making it the most capable solution for Euromedia’s production needs. Also, because we were able to re-use some of the cards installed in the previous frame, our solution was then the more affordable solution. The production needed was complex and Euromedia was not willing to compromise on the quality of the production. Euromedia needed to have the right horsepower and flexibility to manage this project, while also preserving their existing infrastructure investments. Only the Kayenne K-Frame was able to do this in a cost-efficient way that also met the tight deadlines that Euromedia had to get up and running for its production commitments.”

Designed to support a variety of sports or entertainment productions, the two trucks have already travelled to several events flexing their new 4K UHD capabilities; the first OB van recently provided Canal+, the French premium cable television channel, with the graphics for the private feed of the Sunday night prime time main soccer matches and will be deployed for rugby matches as well. The second OB Van was deployed by Euromedia for coverage of the recent Formula 1 Grand Prix in Monaco.

Gaël Tanguy, Euromedia’s technical director, commented: “It’s one thing to achieve a one-off 4K UHD production, but it’s another story when the pace increases to one match per week. In order to ensure a successful debut, we combined the forces of Euromedia’s production crew with Grass Valley’s Kayenne K-Frame switcher in our OB Trucks A21 and B40.”

van Welsem concluded: “Euromedia is a great example of a service provider that is looking to the future, making decisions and investments that will position them well to deliver content that stands above what is currently on the market. A lot of thought and planning went into this move, knowing that our solutions are playing a key role is very gratifying.”