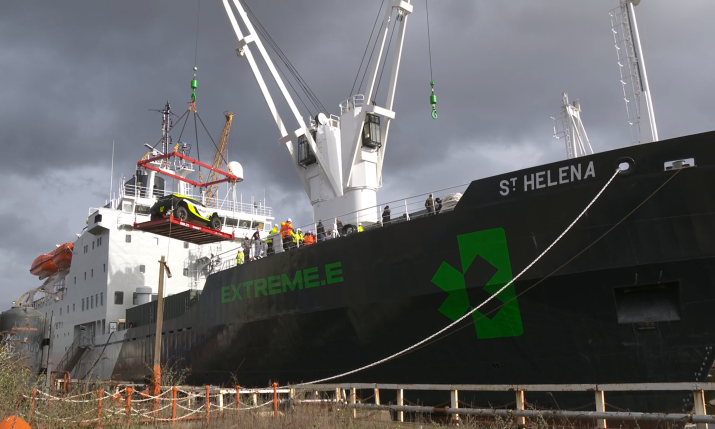 Loading the St Helena for the trip to the inaugural race

After an extensive two-year refurbishment, Extreme E’s floating centrepiece, the St Helena, is ready to set sail for the championship’s inaugural race weekend, which takes place on 3-4 April in Saudi Arabia.

The moment was marked in Liverpool, UK by Extreme E founder and CEO Alejandro Agag who sprayed a celebratory bottle of Moët champagne, which had been specially personalised for the occasion, over the ship’s hull to toast the start of her new journey.

“This has been a massive project and she really is unrecognisable from when we purchased her back in 2018. She is unmistakably part of Extreme E with the exterior branding, and the internal refit looks incredible. One of my favourite features of the ship is the creation of a science laboratory, which replaces the original swimming pool, and I’m delighted that from Saudi Arabia we will have a variety of scientists on-board conducting oceanic research projects.

“I have always had a love for the ocean, which was inspired by documentaries featuring French biologist Jacques Cousteau. He made me dream because he had a boat, he had the Calypso, and my dream is that the St Helena becomes the new Calypso of the 21st century.”

The ex-Royal Mail Ship, which acted as the lifeline to the island of St Helena, has been under Extreme E’s stewardship for more than two years and during this time has undergone an extensive multi-million euro renovation process, including a comprehensive mechanical overhaul as well as a full refurbishment of the interior alongside a fresh livery and branding.

Agag continued: “I would like to take this opportunity to thank all the crew who have worked so hard on the St Helena to prepare her for her new journey, and all the team at Cammell Laird port in Liverpool – we wouldn’t be at this point without all their efforts.” 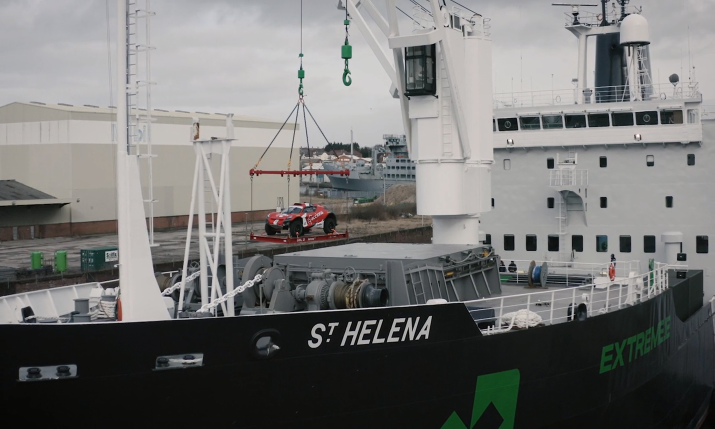 The championship’s freight from teams and partners will be transported by the St Helena. Items include its race fleet of electric vehicles (ODYSSEY 21) fitted with Continental tyres, Air Shelta tents which will form the team garages, the podium, the start gantry, TV and broadcast equipment, three machines from 3devo to turn plastic waste into the championship’s trophies, two custom BRIG Eagle 8 carbon black support boats, a hydrogen fuel cell for zero-emission car charging created in collaboration with AFC Energy, plus a variety of Bosch tools.

The approach to the refit was to significantly improve, while leaving as small an environmental footprint as possible. This was achieved by upcycling, and rather than scrapping and replacing, the interior was stripped and refurbished, producing a contemporary, modern appearance. In addition, the ship utilises low-energy LED lights, low-water consumption bathroom fittings and even chairs made from recycled plastic bottles collected from the Mediterranean. There is also a hydroponic system on board in the kitchens which will enable the chef to grow the vessel’s own herbs and garnishes.

Last year, Extreme E in co-operation with Enel Foundation, the championship’s Founding Scientific Partner, invited scientists to apply for space on the ship to conduct research connected to advancing climate science in its onboard laboratory during the voyage. In total, seven projects managed by 14 scientists have been selected to join the voyage. The seven projects will each focus on a different area of ocean research, with full details to be announced in the coming weeks.

In addition, there are 62 cabins which can sleep up to 175 people, two lounges, an 80-seater restaurant, a 100-seater exterior deck, an 80-seater presentation area plus capacity to carry 90 20ft shipping containers. A crew of 50 people will live and work on board the St Helena over the course of her voyage.

Upon departing the UK, the St Helena will sail through the Mediterranean to Saudi Arabia, where it is expected to arrive after 17 to 20 days. After Saudi Arabia, she will go back through the Mediterranean to Senegal, across to Greenland, down to the Amazon and then further south to the final destination of the season in Tierra del Fuego, Argentine Patagonia.