Speaking to the Godfather of live sports broadcasting George Greenberg 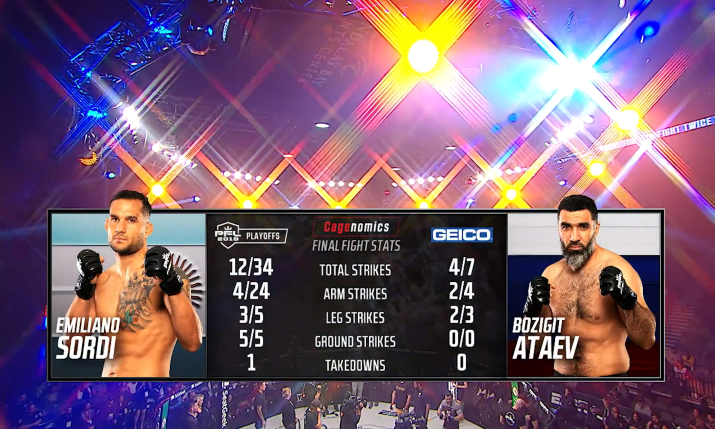 George Greenberg, executive producer at the PFL, says: “We know that through graphic information, a fan is educated and the PFLs constant flow of pertinent information to the fan for us is everything.”

The Professional Fighters League (PFL) launched just two and a half years ago yet it is already breaking innovation barriers in its use of data and graphics, which is, in turn, earning it healthy upswings in terms of fans and viewers.

In August last year, PFL launched its over the top (OTT) app, PFL MMA, which was part of its push into Europe.

This app includes the PFL’s graphical data, based on ‘Cagenomics’, the PFL’s in-house-developed proprietary SmartCage technology which allows it to deliver real-time fighter data and analytics to fans.

This Cagenomics data, which uses everything from cameras, algorithms and GPS positioning within the SmartCage where fighters face each other down, provides a new level of interactivity and engagement for fans over the web, as well as on live TV in the US, and is a resource and aid in storytelling for its commentators.

Speaking to SVG Europe, George Greenberg, executive producer at the PFL, says: “We know that through graphic information, a fan is educated and the PFLs constant flow of pertinent information to the fan for us is everything.

“For us at PFL, information and communication of fighter information is critical. This is how we tell stories. The PFL puts on more pertinent graphic information with a constant flow to the fan than anyone else. We feel with this information flow, the fan is better to better able to understand and grasp the sport; it’s not an easy sport to look at and evaluate, you know; somebody can get knocked out, somebody can get submitted, someone can get out-pointed in a decision. The key thing for us at the PFL is how they got there and telling that story informationally,” states Greenberg.

Adds Greenberg: “[PFL commentator] Randy Couture calls MMA kinetic chess. Now you can imagine what happens when fighters look at each other and they’re sizing each other up. They don’t know if they’re going to go to the ground, if they’re going to stand up, or if this going to be a swing fest. And this is all being registered in fighter’s mind. Well we provided the backdrop and a great storytelling point in how many strikes, the speed of the strike, how often they went to the ground, their positioning through GPS, through interesting camera angles that we have from Ref Cam to live Telestration; we’re taking all of this information in real time and constantly presenting it to the fans.” 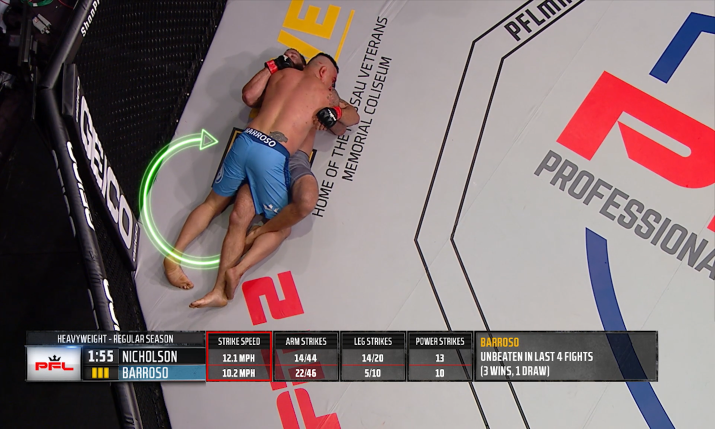 FPR is based on the PFL’s vast data resource. It will work in a similar way to the NFL’s quarterback rating (QBR), explains Greenberg: “The biggest graphic difference we’re going to unleash in 2021 is a brand new graphical fighter performance rating. And this measures every single fighter in every single weight class. So you can compare how a female 155 pounder performs versus a 265-pound male heavyweight.

He adds on the QBR: “[American football players are] measured by a bunch of stats that are cumulative, that give a performance. We’ve applied that methodology to fighter performance. This information on the [fighters] is going to revitalise and re-energise how fans look at fighters.”

In 2021 PFL is also set to add Kick Speed data to its event coverage for fans. It will do this using a number of overhead cameras to interpolate data. Says Greenberg: “When a kick is thrown, how long does it take from when it’s thrown to when it’s actually touching a body part? Through three cameras, and a bunch of mathematical equations, we’re measuring time and distance and that will equal speed. We’re going to slowly walk that into how we present it in the live events.”

He goes on to note that the PFL is all about risk taking in terms of technological innovation: “We are not afraid of technology. We are not afraid to make mistakes on air. We are very measured when we roll equipment out to present to the audience; we feel that in order to do things, we can start them on the back burner. But when it’s ready to go, it has to be ready to go.

“Technology is not always 100%. I think fans understand that, but when we cracked the code on Strike Speed, it was a process. We’re about to do the same thing with Kick Speed; it’s a process. When we show the GPS positioning [Fight Tracker], we know how much distance fighters travel within the cage. We know how much time a fighter spends up against the cage.” 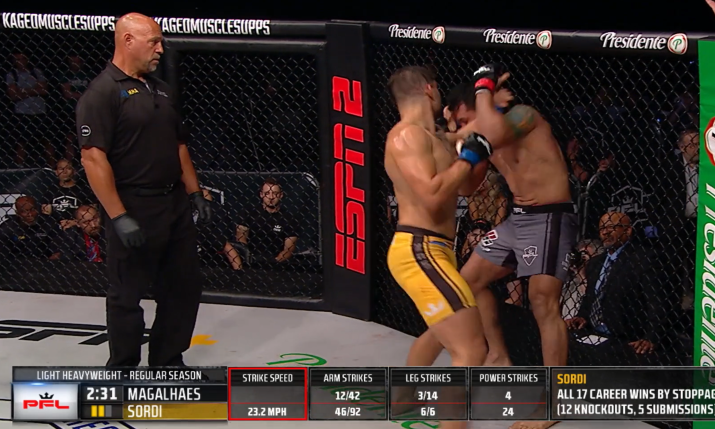 The 2021 PFL Season will begin 23 April on ESPN2, ESPN Deportes and ESPN+ in primetime in the US, as well as being distributed to 160 additional countries around the world on various premium sports networks, as well as on the PFL’s own OTT platform

He adds: “Our broadcasters are great communicators. We have Sean O’Connell, former PFL light heavyweight champ, former UFC champ, Randy Couture, and a brand new addition to us in 2021, Kenny Florian. Kenny was a former four division fighter at the UFC. These three collectively tell brilliant stories from a commentary point of view.”

While the third PFL season was called off completely due to the COVID-19 pandemic, Spring 2021 marks the beginning of the PFL Regular Season, followed by the Playoffs in October, and the World Title Championship on New Year’s Eve.

The 2021 PFL Season will begin 23 April on ESPN2, ESPN Deportes and ESPN+ in primetime in the US, as well as being distributed to 160 additional countries around the world on various premium sports networks, as well as on the PFL’s own OTT platform. The remaining Regular Season events will take place on 29 April, 6 May, 10, 17 and 25 June.

The audience is growing, says Greenberg: “MMA fighters have brought a completely new demographic of 18 to 34’s to the table. And those 18 to 34’s become the 18 to 49’s. And our fan base grows and grows internationally. It is hands down the sport for young fans and also in converting fans that might not be familiar [with the sports, moving] from boxing over to a brand new place where they can take all this information that the PFL provides, internalise it and become smart instantly.”

The PFL’s international business has doubled since the launch of the app, “and it is growing even further from country to country”, notes Greenberg. “MMA will eventually become an Olympic sport, and we’re proud to be at the head end, you know, educating fans, distributing all over the globe, but bringing a PFL style of production to the world.”

“Our off season has been one of the biggest creative boons for the company that we’ve ever had, as far as growth spurts. We’ve drilled down on every aspect in this company from marketing to production, to distribution, to where the events are going to be held and how we’re going to control everything within our grasp. We’ve become much more efficient.”

He concludes: “It was for us a great chance to gather the company together, take a look at what we [were doing] and push to where we want to go for 2021. [COVID] was a horrible thing to happen to any country – to the world in general – but as a business you have to figure out how you can survive and then thrive. And we’ve managed to do both in the off season in 2020.

“The key is you had to hold your fighter rosters, and you had to fortify that roster because at the end of the day as broadcasters, we can only cover the events inside the cage. And we believe we have the most compelling fighting group in all the world. They are first-class, they are elite, they are wonderful talkers. They are wonderful showmen and the PFL is all about showmanship,” concludes Greenberg.

George Greenberg is a 16-time Emmy Award-winning producer and director with over 40 years of experience in television production. He most recently served as executive vice president for FOX Sports, overseeing content integration within all FOX Sports 1 and FOX Sports 2 programmes and supervising all production for UFC and Premier Boxing.

Greenberg was instrumental in the launch of Fox Sports and during his career has overseen the NFL, MLB, and NHL. He also was producer for ABC’s broadcast of Summer and Winter Olympic Games in 1984 and the Winter Games in 1988.

He reminisces: “At ABC Sports I learned from the best storytellers in the world that started the Olympics and grew the Olympics. And I always wanted to be part of a start up, so when Fox Sports started in ’94, I was one of the first people hired by a gentleman named David Hill. And I got to grow Fox Sports 1994 until when I left in 2017. And when I left, I still had plenty of energy and wanted to be married to a company that was a start up again.”

Greenberg had been involved with UFC from the time the organisation was acquired by Lorenzo Fertitta and Dana White in 2000. He continued to work with Fertitta and White for seven years, helping to develop the broadcast product, until he left Fox Sports. That is when he found the PFL.

“When I left [Fox Sports] I was asked about this opportunity [at PFL] literally three days after I left Fox. And for me, it was a no-brainer. I wanted to be with a start up. I wanted that energy to start up from the ground and build something with partners and people that had a vision for the sport.

“I love MMA. It’s the fastest growing sport in the world. And I believe we have nothing but open highway in front of us to continue to grow the sport, grow the fan base. And most of all communicate in a way that tells stories, getting back to my ABC root; at the end of the day, we are storytellers. We have cameras and announcers and we have equipment. How does an individual take all that and push it out to an audience? For me with a great production team it’s a daily challenge, but it’s one that I set up for with the PFL and I couldn’t be happier that I landed here.”