For three years, the OB firm Cloudbass has partnered with the University of Derby in delivering a Broadcast Engineering and Live Event Technology Degree, writes Justin Davey, head of resources and education at Cloudbass.

Bryan Buobu-Nwosu, an outstanding student, started with the course in year one. He has brought a great skill set to the course and has developed a high level of expertise, whilst working with the University of Derby and Cloudless.

Buobu-Nwosu grew up in Nigeria. There he studied a degree in data management but did not complete the course, as in 2005 he moved to the UK. 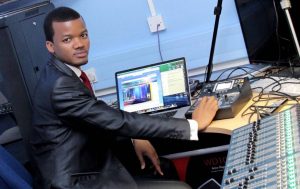 Before starting the course, Buobu-Nwosu was the head of the media team in his local church, LoveWorld NorthWest London. He also volunteered at LoveWorld TV, a Christian television station that offers top quality programmes to millions around the world. To his credit, he created a number of TV programmes, streamed live events and developed the station’s mobile app. Aside from this, he has also been a part of serveral production crews for various Christian outreach events held across the United Kingdom, Ireland and Sri Lanka.

He was determined to continue his education and to this end, completed an Access to Higher Education Diploma at Ravensbourne University. Following this Buobo-Nwosu started studying at the University of Derby. Here he showed his love of outside broadcast by being incredibly dedicated whilst studying the Broadcast Engineering and Live Event Technology Degree. The course allowed him to have access to industry-standard equipment and expertise and benefit from working on a variety of real live broadcast productions with Cloudbass.

He said of his time with Cloudbass, “it has been remarkable working with Cloudbass. I feel I have benefited so much, as there has been such good communication and feedback, which has really helped me develop. I feel I have been well supported by both Cloudbass and the University and would highly recommend the course to anyone who is considering working in outside broadcast. The course has been excellent and has really given me a firm foundation to succeed in the industry.”

Buobo-Nwosu has gained an in-depth understanding of the engineering and technology behind broadcasting including production, vision mixing, replay systems and signal distribution.

As a final assignment he managed an outside broadcast in May — Karis Sportfest at the Forest Recreational Ground in Nottingham. This was to provide broadcast facilities for a number of football matches. It was an outstanding success and he put into practice all that he had learned, both theory and the hands-on sessions.

Ben Sams, the course leader at the University of Derby on the course said, “Bryan was the first student to enroll on this exciting new course, it has been a pleasure to teach Bryan and work in partnership with him as we develop the course. There is a huge demand for highly skilled engineers in the broadcast industry and I hope Bryan will be the first of many to come through our Broadcast Engineering and Live Event Technology degree at the University of Derby in partnership with Cloudbass.”