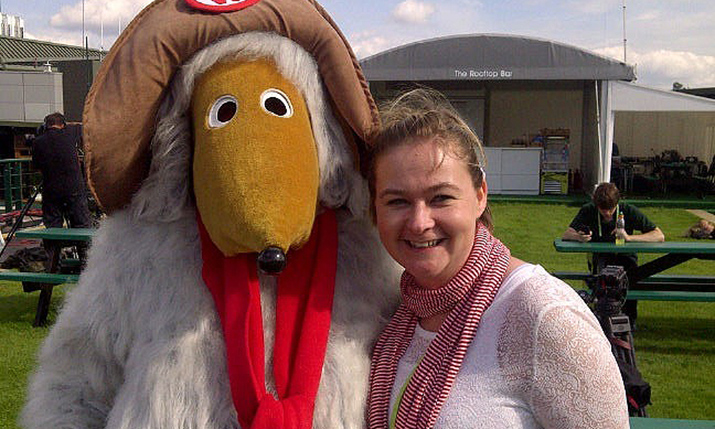 Victoria Cotton [pictured, right] behind the scenes at Wimbledon Championships with a local Womble

“I can feel my blood fizzing with excitement again just thinking about it,” says Vicky Cotton, BBC Sport’s executive producer for live streaming, reminiscing on the 2012 London Olympics. “I’d set myself a little goal in 2007 when we were awarded that games that I would be one of the BBC1 programme editors, and I was.

“I remember watching that brilliant opening ceremony and then the next day when the viewing figures came in – I think it was about 23 milliion – I had to run out of the office and throw up because you suddenly realised that this was going to be huge.

“It was the best couple of weeks; I was in the chair when Team GB won their first gold medal and the atmosphere was just incredible.”

Cotton’s first full time contract at the Beeb was was for a job titled sports assistant, for BBC TV Sport. She says: “I’d just graduated and I saw this role advertised. I applied on a whim really. I didn’t think I’d even get an interview, but I did, passed the infamously difficult sports quiz, and before I knew it without even really thinking I’d packed up my life in Manchester and moved to London.

“I didn’t know until I started that I was the first woman to get that job and it was a brilliant entry level position,” she continues. “In the space of a week you’d research a story for the Grand National, write notes for presenters and commentators and write live seat of your pants copy for programmes like Grandstand and Match of the Day. Within a year I was in Sydney working on my first Olympics after a summer working on Queens and Wimbledon. It felt mad that someone paid you to do this job. It was the best grounding for anyone wanting to start in sports broadcasting. It’s still the best job I’ve ever had.”

“Its always felt collaborative and creative. There’s so much variety and you never do the same thing the same way twice (you may have noticed by now that I like change and opportunities, even if that comes with a side of chaos!)”

“Each role gave you a little bit more experience and bit more ambition,” Cotton states. “I was lucky enough to work on a huge amount of high profile events. I’ve worked on Six Nations, Grand Nationals, Royal Ascots, Australian Opens, French Opens, Wimbledons, Commonwealth Games and Winter and Summer Olympic Games. I was very single minded that I wanted to edit live programmes; I kept my head down, worked hard and ended up as one of the live gallery editors for every multi-sport event from 2010 to 2018.”

On what she loves about her job, Cotton says: “No two days are the same. There’s a freedom and excitement to what we can do as a streaming team. We can be cooler, edgier and can experiment a little bit. It’s genuinely exciting to be working in an area that is expanding and changing so quickly. I love how flexible we can be and how fast we can adapt.”

The fact that it does not really feel like a job is one of the draws of sports broadcasting. She explains: “Obviously, there are times where you can feel stressed and sometimes it’s a job like any other but it’s such a privilege to work on some of the biggest events in the world.

“Its always felt collaborative and creative. There’s so much variety and you never do the same thing the same way twice (you may have noticed by now that I like change and opportunities, even if that comes with a side of chaos!).” 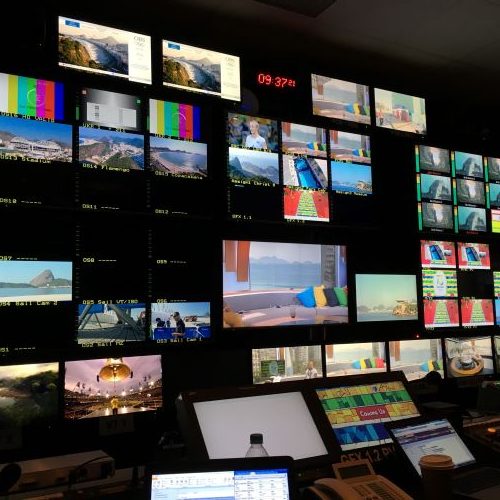 Make change and be responsible

However, she adds that despite the overall excitement generated by her career, there are ups and downs. Cotton explains: “There are different periods of time in your career. As much as I loved making content there comes a time when your experience and development means you start questioning why things are done a certain way or why the company’s strategy is this. Then comes the point where you have to put yourself out there to make changes and be responsible, rather than just talking about it. I reached that point where I wanted to be part of that leadership team to really effect a change.”

She goes on: “There’s always a point in your career where you feel stuck and blocked and I had that in my last couple of years in TV. An opportunity came up to move over from traditional linear output to digital, I was encouraged by Sharon Fuller who was leading that new team to open my eyes to how the broadcast landscape was changing quickly and expanding. I got the role as assistant editor in the digital streaming team and I’ve never looked back. It’s a really forward-thinking role full of opportunity, change and ideas and it just suited me.”

She adds: “I think the hardest thing was persuading the interview panel that I was ready for a leadership role.  I’ve effectively grown up in the department and it’s difficult to reinvent yourself.

“The other thing about stepping up is that suddenly you have to do a whole series of tasks that you’ve never had to do before and they might be alien to your skillset! Setting a strategy, training and leading teams effectively, budgeting well, they’re all things that benefit from proper training and at the start of the job you don’t have that knowledge.”

“We need you. We need more women to provide balance, bring a different perspective and widen the talent pool. If you want to work in this industry there should be nothing stopping you”

Other challenges Cotton has faced are around being a woman in a sports world. “I felt it was sometimes hard in my first role to get the respect that my male peers had, especially when you’re working as a researcher on a live programme, I never felt they 100% trusted what I said.

“Sometimes it’s hard to know at the time what is happening. I wish I knew then that I was really tough and resilient, even though sometimes you might go home and cry. I was lucky too that I had people in my corner that would tell me I was doing ok and would give me a little push in the right direction. And I had a great bit of advice that my Mum gave me when I first started out: “In business people don’t give you a chance because they feel sorry for you”.”

From sports radio to TV

As to how she started her career, Cotton says it was not a love of TV that first lured he in, “it was radio”.

She outlines her journey: “I was obsessed by sport, football in particular and it was hearing Eleanor Oldroyd reading the sports bulletins on Radio 1 that made me realise it could be a career. When my school told me it shouldn’t be a job I pursued because, “women don’t do that,” I could look at her and say, “yes they do”. She is the perfect example of a brilliant professional. She has such a gentle command of her subject and is such an inclusive broadcaster it made me feel that I wanted to be part of that world.”

She quickly got her budding career off the ground by being persistent. Cotton explains: “I did a week’s work experience when I was 16 with what was then BBC Radio GMR and after that the sports team couldn’t get rid of me. I answered phones, I made tea, I worked for no money, but they paid me with advice and experience and opportunities to develop quickly.

“I studied English and Italian Literature at Warwick [University] which effectively meant I read the best books in the world for four years, one of which was spent in the sun in Rome before doing a Post Graduate diploma in Broadcast Journalism at UCLAN. I began to freelance more officially across the news and sport departments whilst finishing my PGDip and that same summer I got my first job in TV working for the BBC.”

Your industry needs you!

To other women looking to move into sports broadcasting, Cotton says: “We need you. We need more women to provide balance, bring a different perspective and widen the talent pool. If you want to work in this industry there should be nothing stopping you. If you’re interested there are hundreds of women out there already who will happily give you advice on all aspects of working in sport. We’re a really supportive and collaborative bunch.”