From the score clock and the Boot Room to the Sky Pad and Ultra HD, Sky Sports has continually added new production, presentation and technical innovations to its football coverage over the last 25 years. At SVG Europe’s Football Production Summit in Paris March 14, Sky Sports Head of Football Gary Hughes discussed the evolution of football production and broadcasting and gave his opinions on how televised football might develop in the future, in conversation with SVG Europe Contributing Editor Will Strauss. 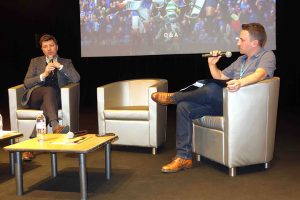 Hughes talked to the Paris audience about the Sky Sports football offering today. He explained why Sky Sports innovates on and off screen, and why that is important to the business and Sky customers. He looked at the innovation story over the last 25 plus years, and presented a short case study on flagship programme Monday Night Football. Finally he talked about relationships with governing bodies and clubs, and how important those relationships have been in Sky Sports’ evolving innovation story.

“In 2016 Sky Sports turned 25! It was quite an achievement for us. We took the best of what we’ve done over those years and thought, ‘what do the next 25 years look like? What does Sky Sports 2.0 look like?’

“So in 2017 we underwent our biggest change ever, rebranding all our channels,” said Hughes. “We launched ten new channels. Five are dedicated to some of the biggest sports, of which two are football with Sky Sports Premier League and Sky Sports Football.

“It was a big rebrand operation,” he said, “freshening up our look and feel, with new high-tech Viz sets. A lot of work went into that, and most importantly it gave our customers choice. We re-launched with new pricing banding, giving people the opportunity to purchase individual channels – cricket, golf, Formula One and either of the football channels at a set price.

“On our two football channels we broadcast more than 1,000 live matches a season, which is a logistical nightmare some weekends but we somehow get it done! We’ve launched new programming as well. Our customers told us they wanted more chat, more opinion, so we did a nightly debate show at 10pm each evening called The Debate, focusing on big stories of the day. And equally importantly we revamped our digital offering, which is critical these days with people consuming content on the go,” said Hughes.

“Why do we innovate? Innovation is fundamental to Sky. It’s a major part of our story and our success. Our customers demand and expect it. It gives customers best choice and flexibility, and gives benefit to our partners and rights holders.

“Innovation helps us to inform, educate and entertain our viewers. Innovation allows us to continue to adapt to changing lifestyles and patterns of viewing, facilitating viewing away from the home as more people consume content on the go, on demand or online.

“It’s not just about technology; it’s about every element on and off screen from production teams behind the camera to the talent we employ in front of the camera,” he said.

“With football, we refer to our programming as the ‘four Es’. The first is Friday Night Football, which is all about entertainment. The second is Saturday, which is about expectation ahead of a big day of football. Our Super Sunday programme is established, the bed-rock of our coverage for 25 years where we have a double-header.

“And then Monday Night Football is educational,” said Hughes. “It started in 1992 when we acquired the [Premier League] rights for the first time, and it’s fair to say today’s offering is virtually unrecognisable from those early days. 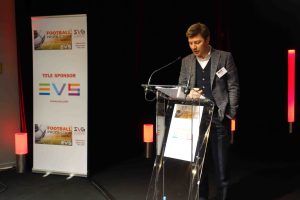 Gary Hughes: “Innovation is fundamental to Sky. It’s a major part of our story and our success”

“First we introduced an SD tape deck to analyse incidents. Then came Boot Room tactic boards and counters to show team line ups. The tape deck was replaced by our good friend EVS, and then touchscreens were introduced. These continue to be at the forefront of broadcasting, powered by ChyronHego and Piero technology. They allow our pundits to cover every aspect of the game and break down key moments. Opta data is fed directly into those screens, allowing pundits access to touch-maps and positions, providing our customers with extra detail and depth to analysis,” he said.

“A partnership with EA Sports allows us to recreate any moment from any game, to provide additional views and perspectives from officials or player points of view. Then there’s our studio technology, where an Ncam and VR tracking system brings team line ups, formations and social media interaction into the studio environment and also allows us to create a virtual window into our studio,” said Hughes.

“The success of Monday Night Football has allowed us to take elements of the programme on the road,” he continued. “This season we’ve introduced a new element to our coverage, called The Match Zone.

“Basically it’s Monday Night Football on the road, a fully kitted-out mobile studio with full touchscreen capability that we can transport to training grounds and stadiums up and down the country. It enables us to speak to the biggest names ahead of the biggest games – rather than them having to come to us.

“We find that the players are much more comfortable talking to our talent (ex-players); they open up and relate. They’re talking to fellow professionals. Maybe our team of reporters aren’t necessarily happy, but to them I’ve just got to say, unfortunately, ‘that’s showbiz’.

“Access is another key area,” said Hughes. “It might not be as visible as a touchscreen or a Match Zone truck. One of the key areas that has helped us build our business over the last few years is the relationships we’ve built with governing bodies and clubs, to provides us with best possible access. It has enabled us to take our coverage to the next level.

“So what’s next for Sky Sports? Well we’re always assessing new technology – the things you see on the screen. UHD we’re already doing; we delivered 126 Premier League games in UHD last season and we’re on course to do the same again this season.

“Dolby Atmos is part of our regular Premier League coverage, and VR and AR are very much part of what we do as well. We’re always analysing consumer trends, giving customers more choice and enabling them to get content on the go via different digital platforms. And social media is more important than ever.

“The hot topic at the moment is VAR. It hasn’t been in the Premier League yet, but has been trialled in the UK. It’s a very interesting conversation,” he said.

“Football production and technology have been on an exciting journey; the two are intertwined and go hand in hand. That will continue long into the future where we as broadcasters continue to find new ways to bring live sports into the homes and onto the devices of our customers,” said Hughes.