Fox Sports has enlisted the help of Aspera and Telestream to enable it to remotely produce live content plus highlights and other packages of the World Cup in Russia, with its team of editors in its Los Angeles-based headquarters. 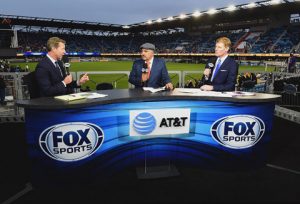 The team sought to utilise Fox Sports’ existing, state-of-the art production facilities in LA with the help of Telestream and Aspera, using IP-based transfer technology. With the cost savings associated with not having to move staff to Russia for the event, as well as building facilities in Russia for them to work from, Fox Sports has been able to instead invest more in the LA facility and production staff, with the goal of creating more content for customers over the duration of the tournament.

Talking to SVG Europe, Kenneth Haren, solutions engineering manager for Lightspeed Live Products at Telestream, said: “The World Cup is one of the premier events that Fox covers. They apply most of their resources to events like this. However, the system we have created for them is very modular, so Fox can unbundle it to get to the NFL teams, for concerts; it can be partitioned out from the 60 feeds, to provide just seven feeds for a smaller event, for example.”

Haren commented: “There are a couple of things attractive to Fox I think; near-live access to a robust set of camera inputs in Russia without having to produce all the pieces, all the adjacent content to live, in Russia. Also, they don’t have to invest in SDI infrastructure in LA or invest in deploying all that stuff to Russia.” 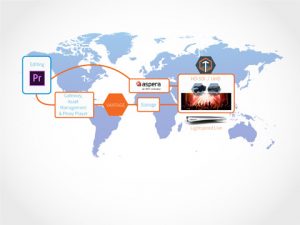 At the heart of Fox Sports’ new live production workflow is Telestream Lightspeed Live Capture that provides baseband encoding of real time HD and UHD into production-grade mezzanine video file formats in use worldwide, while simultaneously supplying a streaming proxy for each channel being processed. For Fox Sports, HLS proxies for each channel are processed to the cloud for consumption by their asset management system’s live proxy player and live sub-clipping tool.

Using Lightspeed Live Capture in concert with Vantage, Fox Sports’ production team will be able to access up to 60 camera feeds from the tournament in Russia remotely in LA; three of the feeds from Moscow are live, and the other 57 are available to producers on HLS proxy viewers. The content feeds are delivered as native format in to their production edit environment (AVC-Intra to Adobe Premiere) and also as high-quality HLS proxy streams.

Producers in LA can watch all 60 incoming proxy feeds. When they see something interesting that they want to import in to their edit suite, they simply mark in/out in the proxy, which triggers Vantage to retrieve the selected AVC-Intra selection and push it to the Fox Sports’ LA-based edit environment from Russia seconds later.

A key part of the workflow equation is the close integration between Lightspeed Live Capture, Vantage and Aspera’s FASPStream technology that enables secure, reliable, and efficient live contribution of broadcast-quality video globally over commodity internet networks securely, reliably, and as efficiently as possible. This reduces the need for expensive and limited satellite-based backhaul, transport and distribution.

Mike Flathers, CTO at Aspera, told SVG Europe: “In our staging environment for Fox Sports we were live editing a bitrate of 220Mbps, and when you add audio to that it starts approaching 250Mbps combined video and audio. A high bitrate like this is pretty incredible. This is not a bespoke process; FASPStream is directly integrated into Lightspeed. It’s a direct communications loop with tightly integrated API comms. All the delivery is being done over FASPStream.”

Flathers said: “We simulated the conditions we thought we’d have in Moscow in Charlotte, [Fox’s operations in North Carolina], and we were sub-30 seconds,” he stated, on the latency expected between Moscow and LA, although he clarified: “The big difference here is that this is not streaming ‘play-out’. The times quoted here are the ability to actually edit live with something like Adobe Premiere. These tools allow you to set a refresh rate to load data into the editor and in the Fox case it was set to 10 seconds. So that accounts for 10 seconds right there. The raw SDI feed needs to be encoded and packaged so they can be consumed by the edit tools (hence Telestream’s Lightspeed Live product). The 30 second number also includes the encoding and packaging/wrapping. This means we’re only slightly behind [what you’d expect of] on-premise, high performance storage on the grid in Moscow,” Flathers added.

Flathers added: “Big kudos to Fox for what they have done in this so far. We’re pretty confident this will work well and have plans for auto switching and fail systems in case [of a complete network connection outage].”

The new workflow eliminates baseband routing and utilisation by delivering professional production file formats directly in to almost any edit, archive and playout system. Furthermore, it eliminates the need to tie up costly point-to-point backhaul systems, such as direct fibre and dedicated satellite links. Instead, it will be continuously available throughout the event via standard internet data connections.

This project is leading the way to convince other companies of the possibilities of remote production, said Heren: “Since the announcement of this project we’ve had a number of calls from people who are looking to do something similar in live backhaul. We now have sufficient bandwidth to support what people are trying to do, and can provision bandwidth at venues. We can manage that bandwidth in the cloud and get it out to end points, manipulate that content from the cloud, and ultimately have a longer term media library of content in the cloud to then move out to production or distribution systems.

“It does feel very much like something that will grow as people are looking to minimise their footprint for on-premise deployment, minimising provisioning and resources,” he concluded.