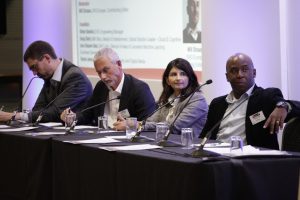 The future of sports broadcasting and sports content will rely more and more on artificial intelligence and machine learning to create customized viewing experiences, improved content creation workflows and more, according to a revealing session at SVG Europe’s FutureSport conference on 29 November.

Olivier Barnich, EVS, engineering team, said at the SVG Europe FutureSport conference in London on 29 November that one of the goals from a production tool standpoint is to use AI to remove mundane tasks and allow production staff to focus on artistic tools.

“The can focus on artistic intent and create beautiful pictures while for low- and mid-level events it will allow for more events to be covered,” he said. The end-result will be higher production values with more automated cameras, graphics, and data stream creation being integrated with manually created images.

Doug Clark, IBM Telco, Media and Entertainment, Global Solution Leader, Cloud & Cognitive, agreed, saying that the use of artificial intelligence can allow for better content for nearly every sport.

“You can convert fans into raving fans as there will be more arm-chair experts for a sport,” he said.

For example, at Wimbledon IBM works with AELTC to capture a huge amount of data related to each match with stenographer pads. And similar work is done at every grand slam and at the U.S. Open for 27 years. And the use of IBM’s Watson artificial intelligence system allows for that data to be used as the backbone for automated highlights creation in realtime.

“AI is a self-learning environment and we have automated that learning experience,” he said, adding that Watson was able to create a movie trailer for a movie after 200 other movies and trailers had been ingested into the system.

“It was able to create the trailer in less than 24 hours versus three months,” he added. A similar approach allowed for match highlights to be created from seven courts at a time during the U.S. Open tennis championships last September.

It’s that sort of ability, said Barnich, that could allow for fans to have personalised highlight packages that take into account their favorite teams and sports.

“AI can bring a lot to our products like auto framing where the system needs to look at what part of the image to keep and which part can be discarded,” he said. The system takes thousands of images and associated metadata to understand where the interesting part of the action is within the image and then AI steers a virtual camera to that portion of the image.

Inna Tokarev Sela, SAP Labs, Director and Head of Leonardo Machine Learning Business, touched on how AI can also make use of image recognition to identify logos and other sponsorship items within a live video stream. In the future that will open up opportunities for more dynamic digital ad insertion within the stream as advertisers could tie their ads to specific moments in the action.

“You could point to a player and have the ad placed where he will be rather than where he is,” she added. “They can also track multiple sponsor elements and classify them in real time.”

Simon Jones, IMG Studios, Head of Library and Digital Media, says that IMG is keeping an eye on AI, especially with respect to logging content and metadata so that content can more easily be pushed up to a Web portal so it can be reached,” he said. “For every hour of content in takes three hours for accurate logging.”