Get in the hole: Sky Sports and Broadcast RF take golf POV to new level at British Masters 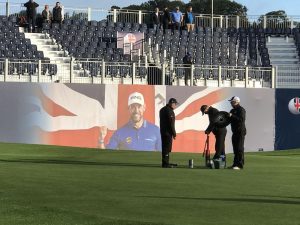 Installing Hole Cam for its trial at the British Masters

Sky Sports is using its coverage of the British Masters golf tournament to trial Hole Cam, a miniature camera system that provides a live feed via RF from inside a golf hole.

Installed on the 18th green of the Close House course in Northumberland, the innovation makes use of a specially extended cup featuring a modified Domo Tactical Nano transmitter and a Marshall Electronics camera. When used during coverage of short putts it is capable of capturing action of the player taking the shot as well as the ball as it enters the hole.

Hole Cam was developed in conjunction with Broadcast RF and is being touted by both companies as a ‘world’s first’.

Sky Sports head of golf Jason Wessely, who was making use of Hole Cam shots during live coverage on Thursday (28 September), told SVG Europe that initially he was fairly sceptical about what it could offer. “At first I wondered what you could possibly see,” he said. “But I’ve been very encouraged. It’s not just a camera looking up at the sky. You see a face coming down towards the hole, you see a hand picking out the ball: you see more than you think you should do.”

Wessely believes it adds a new dimension to simple putts. “The viewer needs to see the ball go in the hole,” he added, “but one of the challenges that golf has, as a viewing experience, is that you see a lot of boring short puts, a lot of one-foot tap-ins and the professionals get them 99 times out of 100. But if you cut live to the ball going into the hole [from Hole Cam] it gives you another perspective.

“When players start to realise there is a camera down the bottom of the hole, they might play up to it. That will be the next stage. It is a tiny piece of the puzzle but it shows we are constantly innovating.” This thinking was borne out when Irish golfer Paul Dunne chipped in from off the green on the final hole to win the British Masters on Sunday afternoon: when he bent down to retrieve his ball from the cup he gave the Hole Cam a thumbs-up and a grin.

Sky Sports is also using Hole Cam for replays when the ball ‘horseshoes’ around the lip of the hole and either falls in or pops out.

Coverage of the British Masters Golf is produced by European Tour Productions, the joint venture between IMG Media and the PGA European Tour. CTV is the outside broadcast facilities supplier. All European Tour coverage is broadcast on Sky Sports with Sky adding its own unilateral commentary and presentation.

Hole Cam shots are being made available on the world feed, which is taken by Sky and the Golf Channel in the US, among others.

The British Masters is taking place from 28 September to 1 October. Sky Sports is showing all four rounds on its Sky Sports Golf channel.

The inspiration for Hole Cam came from David Randall, a Sky Sports golf producer, who spotted a photograph in a magazine apparently taken from within a golf hole. Attracted by the drama it offered, he suggested the idea of a live video shot to sports technical manager Brian Naylor. The challenge then was to firstly ensure it was technically possible and, if it was, to get buy-in from the rest of the production team.

Having explored other options, Naylor approached Broadcast RF, floating the idea of inserting a camera inside the metal cup that sits inside the hole itself. But while technically getting a transmitter and a camera inside the cup and getting a signal out again was a challenge, there were also golfing hazards to negotiate.

“We discovered that the most important thing we needed to do was to satisfy the officials at any event and the green keeper in particular,” explained Naylor. “The greens are hallowed turf that we cannot touch so digging a trench was definitely out of the question. Getting the signal out of the hole was a challenge too as radio frequencies don’t work terribly well underground.”

Chris Brandrick, commercial director of Broadcast RF, part of the Euro Media Group that also owns CTV, was set the challenge of making it work technically and within the boundaries of the sport’s guidelines.

“We did think Brian was a bit crazy at first,” he admitted to SVG Europe, but once his engineers had spent some time mulling it over, they came up with a plan.

Unable to change the diamter of the cup within the regulation size hole, and required to have nothing protruding upwards, they opted to extend its depth, making it eight inches long rather than the usual six. This additional two inches allowed enough space to install the Nano transmitter.

Another big hurdle was battery life. With such a small space available, big batteries were not an option. And, as the cup cannot be removed during the day’s play to change or re-charge batteries, it became crucial to devise a way of extending or conserving power. This is where the company’s experience of having installed miniature cameras on road and track bikes came in useful.

“We needed a data system that would remotely turn the camera on and off,” explained Brandrick. “That was the key. We used the software that we developed in-house for all of our POV systems. We turn it on only when we need to so the battery can be small enough to exist in such as small space.”

To get buy-in from production, Naylor mocked up a Hole Cam shot using a wired camera connected to a video monitor. This proved to be a bit of a eureka moment.

”When you try to describe it, you think what is the point?,” he explained. “But when you see it and you go through the scenario of taking the flag out, putting the flag in, looking into the hole, seeing the ball trickle around the edge, production could see the value and were quite excited about the prospect.”

Before taking a working version of Hole Cam to Newcastle for the British Masters, Brandrick did a test run at his local golf course, Wildernesse Golf Club in Sevenoaks, where the green keeper allowed him to test the digging and installation process.

Hole Cam was installed on the Wednesday (27 September) with the green keeper being charged with inserting the modified cup into hole.

The final hurdle was efficiently getting the signal from the cup to the OB truck. For this, a vast network of receivers has been installed around the 18th green at Close House. Two antennas are high on a crane, two more are on a five-metre camera hoist and a further two sets of two antennas are on the grandstand, creating a horseshoe of receive antennas.

“We’ve got such little sniffs of RF from eight inches underground, in a metal cage, going directly up, that we really have had to hone in on the receive side of the kit,” said Brandrick. “We’re learning every day. By the end of the tournament, we will have a lot more knowledge and we will be able to refine it.”

With the current RF set-up as it is, it would be impossible to add Hole Cam to all 18 holes but, with some modifications to transmitter positioning, it may be possible to increase the number of holes in future if required, he added.