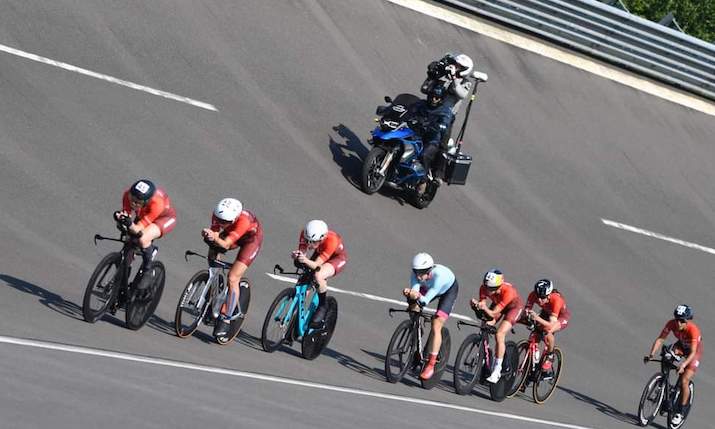 To cover and share in the excitement of the Pho3nix Sub7 Sub8 race, Gravity Media set up a remote IP production between Germany’s Lausitzring racetrack and the company’s production centre in Sydney, Australia.

In Germany, a TV studio and 16 cameras – including motorcycle, polecam, drone and Shotover gyro-head cameras – were deployed. Each was equipped with a Haivision Pro380 transmitter paired with one or two Quad external antennas. The transmitters captured and transmitted all footage from the competition and TV studio at low latency over a bonded cellular network to Gravity Media’s production centre in Sydney.

At the production centre, all feeds were ingested and decoded by Haivision’s StreamHub platform for distribution – after editing and mixing – to the Pho3nix Foundation’s social media platforms. To allow field crews to view current on-air programming, Gravity Media also relied on the Haivision Rack400 and Makito X video encoders to send video return feeds directly to the Pro380 field units with sub-second latency, in addition to the TV studio’s monitors via a Makito X4 decoder.

In total, the broadcast included nine hours of live racing, interspersed with pre- and post-show content, guest interviews, pre-recorded content and technical analysis. Over 50,000 viewers across the globe kept up with the triathlon via YouTube and Facebook, with a peak of 28,880 concurrent viewers watching these champion athletes finish under the goal time of seven hours for men and eight hours for women.

“This event has been a great success at every level,” said Solene Zavagno, general manager at Gravity Media France. “In addition to the technical achievement of this highly complicated and advanced set-up, which was brilliantly executed by the technical teams, the project was also a great collaboration between the Gravity Media offices across the globe.”

“Haivision’s IP video contribution solutions offered Gravity Media reliable and broadcast-grade video transmission over cellular networks from one end of the world to the other,” said Ronan Poullaouec, VP of engineering, remote and wireless systems, at Haivision.