Greybeard of audio: A1 Ian Rosam reminisces on a lifetime in sports broadcasting sound 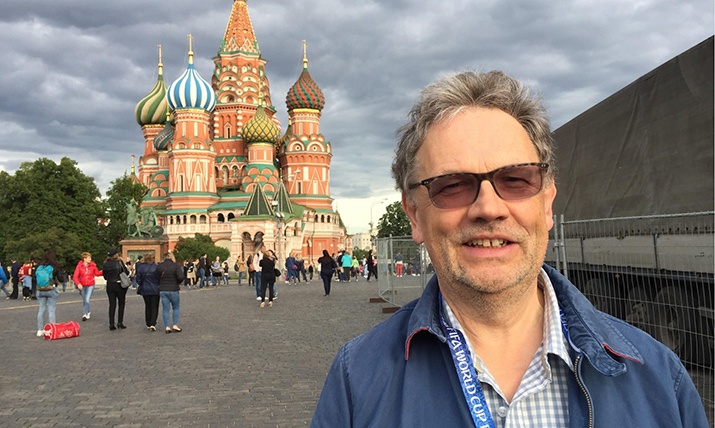 Ian Rosam in Moscow for the FIFA World Cup 2018

From creating the Sky Sports football replay “whoosh” in 1992 to planning his retirement after the 2021 Euros this summer, A1 audio expert, Ian Rosam, has seen the world of audio evolve over generations.

From the BBC in 1973 to Thames TV, the music business, ITV, Sky Sports, HBS and Olympic Broadcast Services (OBS), to many more, Rosam has a pedigree in audio longer than most.

One of his most memorable career moments that have changed the way we perceive live sports on TV is the association of sound with a graphic wipe; a seemingly small addition, but one that has had a major impact.

Rosam explains: “My co-director [Robert Edwards] and I brought to Sky footie the replay “whoosh” and graphics sound FX. These were things we naturally had on the quiz shows like Catchphrase we mixed. We explained to David Hill, then Sky’s head of sport, that a video move such as the replay wipe would normally have an associated sound. He agreed and as I was news dubbing the following day, I spent my lunchtime making the first replay “whoosh”, which had to be under a certain length in order to fit into the memory of the Yamaha SPX90 that was triggered by a GPI from the Abacus A53 when the wipe was fired by the vision mixer.

“From the excitement of a live event to using and playing with state of the art technology to find new solutions, to mixing with great crews, sports audio is a brilliant area to work in”

“We next added graphics noises, which were manually triggered by the Vision Mixer. Nowadays they are all from the graphics engine in full 5.1 surround. We also treated the football as if it was a gameshow with the various audio sources, crowd, commentators, ball FX, etc; very much as we approached light entertainment (LE) and gameshows, so a much more heavily compressed and LE in sound, rather than just representing what was happening.” 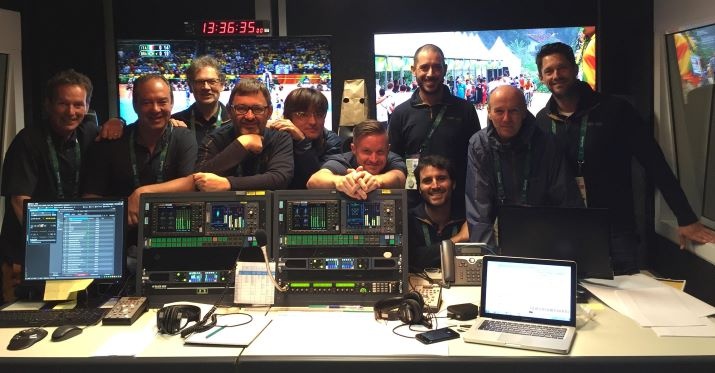 The multi-national crew for engineering quality control at the South Korea 2018 Winter Olympics in the control room, made up of five Brits, one Japanese, one Portuguese, and three Spanish. Ian Rosam third from left

Rosam comments on the result of the addition of the “whoosh” to Sky Sports football coverage: “In the early days of Sky Premier League coverage, most viewing was done in pubs. If there was a dull game (heaven forbid!) and you and your mate were ignoring the TV and supping your pints and chatting, on hearing the “whoosh” you would look up knowing that it signified a replay of an incident that you hadn’t seen, with probably three angles of the play. So it became a clever way of re-establishing contact with the viewer for the coverage.

“There was some criticism from some parts of the broadcasting world at the time, but it’s now the de facto way sport is covered,” Rosam notes.

He adds: “I think the field of play FX levels were popular with what we termed the “Playstation Generation” of viewers, and obviously EA Sports and their football video games emulated Sky football audio to the extent of using Sky recordings of games FX.” 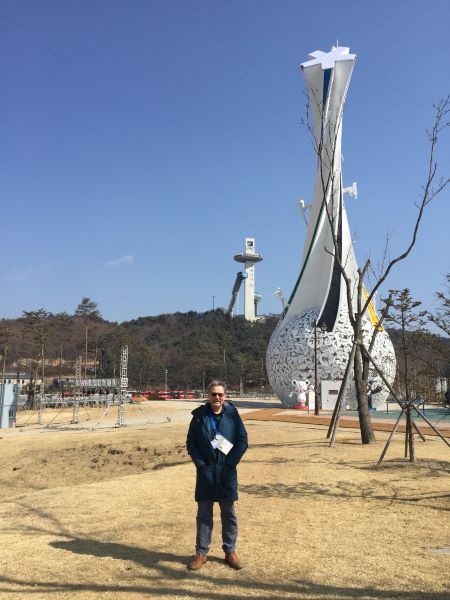 Rosam started out at the BBC after dropping out of an electrical and electronic engineering degree at the University of Surrey after two terms, as, “I realised I was going to be starting in the same job, but three years later”. He adds: “Also the maths involved with degree level engineering was daunting, so not as enjoyable as the hands-on side”.

He had seen an advert in his school magazine for BBC technical trainees, which pushed him towards a career in sound as it seemed to fit in with his obsession with, “amps, guitars and a small reel to reel tape recorder, so it seemed like an obvious choice”.

He applied to the BBC and began working as an audio assistant for BBC Wales. He got his training at the infamous BBC Wood Norton, and then worked in Welsh radio and television based in Cardiff for the broadcaster.

He later moved to Thames TV at Euston, London, then spent four years in the music industry touring and working on PA rigs and FoH mixing. He went back into TV at Anglia in Norwich, Norfolk, then joined TVS at start of its franchise in 1982. A decade later he was made redundant so formed Video Sound Services with fellow supervisor and friend, Edwards.

He comments: “Mixing Premier League led to Video Sound Services being asked to originate an audio production plan for the FIFA World Cup 2002, and we covered Korea and Japan for HBS as part of that with quality control in Korea. We then did the same again for the World Cup in 2006 in Munich, the Euros in 2008, and all subsequent World Cup and Euros events. The Olympics contacted me for Beijing 2008 because of my experience with 5.1 audio. I’ve covered all Olympic games since then for engineering audio quality control.”

Rosam’s first proper sports broadcasting role was as one of the two main match sound supervisors with Edwards, for Sky’s initial Premier League coverage back in 1992. Prior to that, working as a sound supervisor at Television South, he had occasionally mixed football for ITV in the South East and Southern franchise area.

He says: “I’d been a sound supervisor for nine years before the Sky opportunity was offered to Rob and I, and as someone who had worked on live network productions I had the experience to cope with anything thrown my way. I’d worked on every kind of programming, from game shows, LE, docos, children’s, news, to single camera, post production, drama, the works! There was lots of live or as-live, in fact sport was the least programming I’d done!” 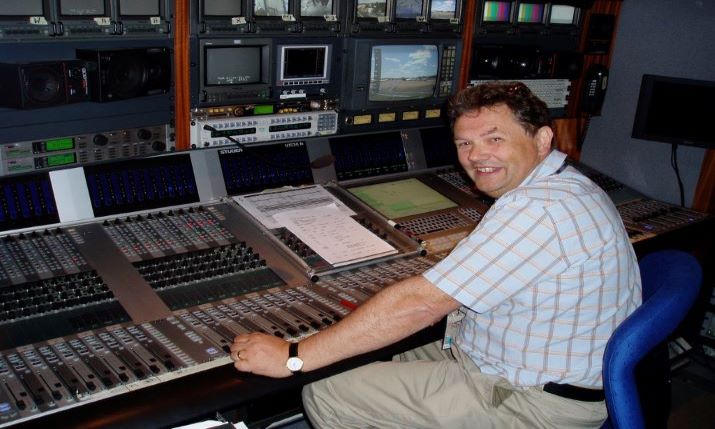 After 48 years in sound, Ian Rosam is set to retire after this year’s Euros

Sports broadcasting audio is an inspiring area to work in, Rosam notes: “From the excitement of a live event to using and playing with state of the art technology to find new solutions, to mixing with great crews, sports audio is a brilliant area to work in.”

As to what is the most challenging thing about working in live sports audio today, Rosam notes: “Productions are getting ever more complicated as technology enables programme makers to continue to push the barriers of what’s achievable.

“As one of the ‘greybeards’ of the industry and as I take retirement after the Euros competition this summer, I can say I enjoy the people I work with, and working at the top level in the world for sports events”

“The number of audio channels in use on a production and the many talkback panels required today illustrate the complexity of what would have been simple programmes in the past, in my time. There were never guarantee engineers, which shows how much more the technology is driving the future. Also, back in the day all productions were mono, with no stereo, 5.1, immersive sound or whatever, with subsequent mixdowns, so much simpler.”

On what Rosam feels has been a particularly exciting, cutting edge development in audio for sports broadcasting that has helped to bring live sport back in the last year, he says: “Immersive audio. Taking 5.1 audio into the home was a huge change that drove technology, production techniques, delivery and distribution systems, and what the viewer at home required to purchase to listen.”

With all these advances, “concentration!” is the hardest thing about working in audio today, laughs Rosam. There is a lot to love about the job though, as he outlines here: “As one of the ‘greybeards’ of the industry and as I take retirement after the Euros competition this summer, I can say I enjoy the people I work with, and working at the top level in the world for sports events.” 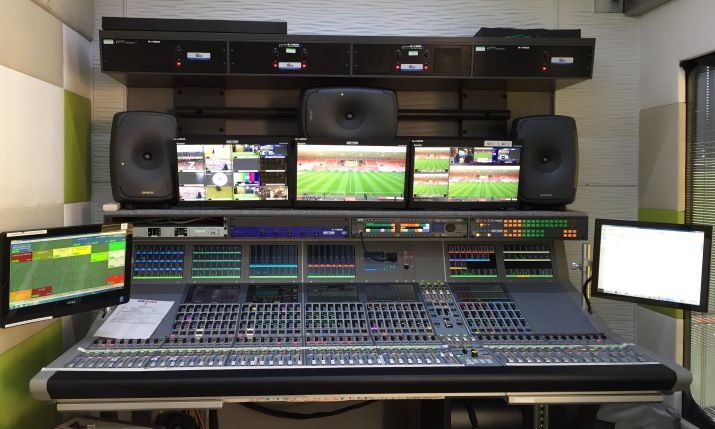 Ian Rosam says: “This is my office in the NEPVisions truck for Sky Sports Premiership coverage”

Rosam comments on what it feels like to be on the cusp of retirement after almost half a century in the job, and what he plans to do with his spare time. “I would have stopped at the end of the Tokyo Olympics after 48 years from 1973. One of the reasons for still doing the Euros this year is to provide a definite end to my career, rather than the COVID-induced stop at the end of March 2020.

“As to what I’ll be up to later this year, I’ve been working on music production with several friends using Apple Logic, which is astounding technology. Also I’ve been cycling on average 100 kilometres a week around the lanes of Kent. I’m still in contact with a lot of sound professionals in a semi-mentoring way as often asked for advice or an opinion.”

Finally, Rosam comments on diversity in live sports audio. There is a significant lack of diversity in audio for sports broadcasting. He says: “It’s difficult to say why there is a lack of diversity in audio, but crews have all been aging and there will be new blood coming in as my peer group stop over the next decade, so hopefully there will be less white and male-orientated crew members, and the new ‘us’ will reflect the make up of the general population better.”