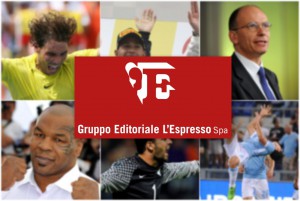 Gruppo Editoriale L’Espresso is one of the most important Italian publishing groups. It operates in all areas of communication and is present almost everywhere in mass communication media, daily and periodical press, radio, internet, television and advertising.

Deejay TV and Repubblica TV, two well known channels respectively appreciated in the worlds of entertainment and information, are part of the Group.

Deejay TV is a national musical entertainment channel that is among the most innovative in the international arena and can be seen on Channel 9 of the Digital Terrestrial Television (as well as on satellite in the SKY bouquet). This is the video counterpart of the successful radio brand Radio Deejay, and has for the last two years been using very advanced graphics workstations to complete the most important music programmes, such as Deejay Chiama Italia and OCCUPYDeejay.

The prestigious channel Repubblica TV (R.it) produces a feed of information of the highest standard, with quality content and very advanced graphics. With programming dedicated entirely to information, it can be seen on Channel 50 of the digital terrestrial television, but also on the web from https://video.repubblica.it/home (but also with the IOS and Android apps). It delivers a continuous cycle of news and the latest information in all fields – including sports, politics, news, business, international, science, technology, internet and more.

The structure of television production is new and dynamic, based on a control room and a theatre based on virtual camera equipped with devices by Orad where internal TV programs are produced and recorded. Some ENG crew work outside, equipped with Panasonic 170 P2 cameras to follow Repubblica TV journalists.

Editing is performed on Adobe Premiere, Apple Final Cut, Avid and even without continuity. In fact editors have ‘multi platform’ skills and may switch roles in the suites when needed.

Three workstations are equipped with Avid, two with Premiere and Final Cut. The headquarters are in Rome, via C. Colombo 90, and the production is twofold, aimed at the TV channel to both the web and live. Some programmes for the contributions employ IP satellite links, which are then redistributed on the web.

Tony Paone, technical manager of the entire infrastructure of TV, audio and video of Repubblica TV, highlights: “We currently use four stations equipped with ClassX software for Repubblica TV channel and two for Deejay TV where we produce graphics as well as the broadcast of the channel, offering informative content in audio/video in continuous rotation. Our graphics workstations are also used to enrich […] live studio broadcasts with guests or live events.”

Repubblica TV is a TV channel and website that operate in symbiosis. In fact, most of the video content is also published on the web and is very rich in graphics in progress as the live streaming is considered an essential component.

The software is used in creating journalistic contributions live in the two daily editions produced in collaboration with the new TV channel F Feltrinelli: 19.50 to 13.50, and often live broadcasts of 8/10 minutes, repeated in the schedules of F and R.Tv channels.

Graphics contents allow operators to enrich video with the names of journalists, the respondents, incorporate photos in a dynamic way, and show news crawl with pictures/videos and messages directly from Facebook and Twitter.

CastaliaCG, the titling software with vector graphics engine, is deployed for the production of advanced graphics while the broadcast is facilitated through the use of some specific scripts developed in Liveboard that interface directly to the web to read part of the journalistic content already created in video.

Video content is stored on a server and everything is ‘packed’ to create a unique product, conducive to airing on the TV channel and the web.

Tony Paone remarks: “A very interesting structural feature is that on the basis of a programme [that is] more or less ‘stable and repeatable’, it is always necessary to reorganise many of the stories in a different way every day, adapting to what the menu calls in video. And the graphics must follow in a very dynamic way’ in fact we realise many crawls for sports news, interviews, behind the scenes, a full page of sport [and] Sport di Republica, while in all the news bulletins sports occupies the final slot and, more generally, 4/5 stories for each news service are dedicated just to sports.

“In August we launched a programme about the soccer transfer market called Figurine as a regular appointment, which includes studio footage and a lot of graphics, where the journalist follows somehow the speech of the collection of figurines made by children and apparently even here the dynamic graphics is crucial.”