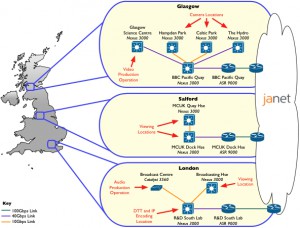 The three cities in the network were Glasgow, Salford and London and each was connected to the state-of-the-art Janet network at 100Gbps

Video is big and takes a lot of capacity to carry it on a network, writes guest columnist Martin Nicholson, Technologist, BBC Research and Development. Traditionally broadcasters send large teams and vast quantities of kit to event locations so that the production can be handled on site. This enables them to have many camera feeds available and to mix between them to make a polished production, while only sending a small number of production feeds back to base for further production and transmission.

Instead of sending large teams and vast quantities of kit to event locations, what if broadcasters used IP cameras and had enough network capacity such that all camera feeds could be brought back to production centres across the country? These production centres could be different for different workflows: for example audio production could take place in one location and video production in another. This is exactly what BBC R&D did for the Commonwealth Games in Glasgow courtesy of a state-of-the-art national network.

The network that BBC R&D and our partners created for the BBC R&D Commonwealth Games Showcase featured 100Gbps connectivity in three cities across the UK. To put this capacity into perspective, 100Gbps is 1000x faster than the fastest readily available consumer broadband, which is around 100Mbps depending upon the location. This capacity is required because there are many camera feeds required and each one must be sent in high quality to ensure that it is still of a good quality by the time it has been heavily compressed for viewers at home.

The three cities in the network were Glasgow, Salford and London and each was connected to the state-of-the-art Janet network at 100Gbps. Within each city there was onwards connectivity to other sites at either 40Gbps or 10Gbps. Most of this high-speed connectivity ran over dark fibre optic links. Virgin Media Business provided seven of these fibre links with individual fibre lengths ranging between 1km and 43km. 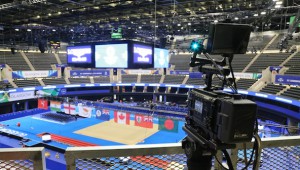 A UHD camera position in The Hydro

Cisco loaned some of their high-end network equipment for this project. We used the ASR 9000 platform as the core router that interconnects with Janet. We used the Nexus 3000 series switches as the main layer-3 site switch throughout the network. We also used some Catalyst 3560e series switches at layer-2 for where there are large numbers of 1Gbps hosts.

There were three Glasgow sites where BBC R&D located cameras for the Commonwealth Games Showcase: Celtic Park, Hampden Park and The Hydro. The video production took place in the public demo space in the Glasgow Science Centre; the audio production in BBC premises in London. The production stream was received in the BBC R&D South Lab in London where the encoding took place that fed Digital Terrestrial Television (DTT) and was also available for IP streaming using MPEG DASH.

To transport the video and audio around the network we used Source-Specific Multicast (SSM) so that feeds could be received anywhere on the network whilst using the bandwidth as efficiently as possible. Using multicast allows all the feeds to be available on-demand at any site, which in turn enables video/audio production to take place centrally at one site or independently at multiple sites.

Each video stream is compressed to around 1Gbps, which helps to ensure that the video remains in high quality throughout the production chain and thus looks the best it can when it finally reaches viewers at home. In the longer term our intention is to work towards using uncompressed video, which is around 12Gbps per UHD video stream, but to control the costs we are using light compression in these technical trials.

With the support of our partners, we were able to fix several initial problems with the network and after that the performance of the network was exceptional. We saw no packet loss across the entire network, enabling the IP Studio team and the numerous other BBC R&D teams to demonstrate their exiting technologies as part of a high profile live event watched around the world on the BBC.

BBC R&D would like to thank its partners Cisco, Janet, and Virgin Media Business for their continued support throughout this project. Without them the underlying network that supported all the BBC R&D demos would not have been possible.

Martin Nicholson is a Technologist at BBC Research and Development. He received a Masters Degree in Electronic Engineering at the University of Surrey in 2008 and has worked at the BBC since. Nicholson has undertaken a variety of projects whilst at the BBC, ranging from making television more accessible for the blind and partially sighted to innovative sports graphics for the 2012 Olympics. Since 2010 he has been involved in a number of IP networking related projects, including a next generation network live pilot and much of the networking behind the 2012 Olympics Super Hi Vision coverage.