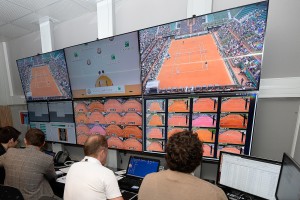 The Fédération Française de Tennis (FFT) video production team will monitor all of the action at this year’s French Open using eight Blackmagic MultiView 16s, which were specified as part of a major video production upgrade for the venue. A purpose-built 3.2 metre by 1.3 metre video wall provides a complete preview of all the action as it happens at Le Stade Roland Garros, Paris’ international tennis venue.

Four MultiViews will be used all year round in order to monitor 1080i50 signals across our 20 courts, including smaller FFT tournaments and training analysis. During major championships, such as the French Open Gram Slam tournament and Davis Cup meetings, the additional multi viewers provide us with a full overview of every camera feed being produced by up to 40 international sports broadcasters on site, as well as outputs of video systems such as keyers and video walls.

The new units replace several full IP mosaics and SDI video quads that we previously used for monitoring. As well as assisting in our overall upgrade of our inhouse production capabilities from SD to HD, the multiviewers also allow us to be more flexible by taking video outputs straight from our SDI video routers to see whatever we need directly up on our screens. Whilst most of our sources for this Grand Slam tournament are HD, as is the case with other international events, the fact that we can support Ultra HD monitoring in the future, and select how we view those inputs (either full screen or 2×2, 3×3 or 4×4) means we have a flexible, reliable monitoring solution that is future-proofed.

We have also recently installed two Blackmagic Smart Videohub 40×40 routers as part of this upgrade of the venue’s audiovisual infrastructure. The first is used to distribute video feeds between the stadium’s multiple control rooms via optical fiber out to giant screens for spectators or to the venue’s IPTV network, while the other manages all of the incoming sources for the video wall in the master control room, routing the MultiView 16 inputs and outputs.

As the only Grand Slam tournament played on clay, the French Open is a major international tennis event, attracting sell out crowds and broadcasters from across the globe, so it goes without saying that our on-court coverage has to be flawless. The installation of Blackmagic Design’s routing and monitoring equipment delivers a reliable and seamless video production workflow that enables us to provide broadcast standard video coverage of some of tennis’ most exciting matches, from the very best in the sport.