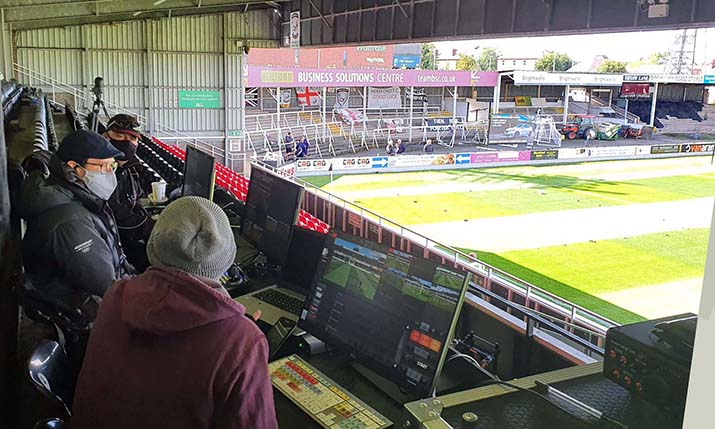 Non-league football club Hereford has launched a new streaming service, provided by CJP Broadcast, that will allow supporters to watch live coverage of games played at its Edgar Street ground.

As well as extending the visibility of ‘Bulls’ matches, which are currently being played behind closed doors, the club also hopes that the new service will extend its appeal to a broader fan base, which it noted was an important area of focus during the COVID-19 pandemic.

The club, founded in 2014 following the demise of Hereford United, chose CJP Broadcast as its technology and production partner for the 2020-21 season.

CJP is providing the club with the system, crewing, streaming platform and paywall, delivering a complete multi-camera HD live sports production service to Bulls fans both home and abroad, as well as for the away fans for every home league fixture.

Hereford FC chairman Andrew Graham, said: “This is a great opportunity for the club to extend its visibility and appeal which is especially important given the challenges imposed by COVID-19.

“CJP’s team of engineers and operators have proved their ability to capture the full excitement of sports matches cost-efficiently. Viewers will be able to watch Hereford’s live games streamed from the Edgar Street stadium, directly to their home TV sets, computers, tablets or smartphones, and be able to share Hereford matches with friends and relations.”

CJP Broadcast managing director Chris Phillips added: “We have been providing live sports production and streaming services this year for football clubs throughout the football pyramid, which includes unique coverage of the world’s largest domestic cup semifinals and final. I am delighted to say that we have agreed a contract with Hereford FC this season, not least because it is my home team.

“We have pre-installed all necessary wiring onsite and will be taking to site for each home game a complete system including four remotely controlled cameras, two tripod-mounted HD cameras with high-quality zoom lenses and a Streamstar iPX860 compact 4 RU ruggedised production unit.”