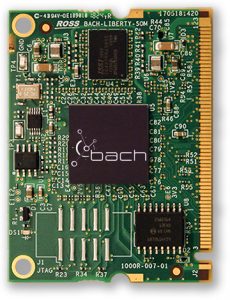 HUGEL GmbH, the Swiss provider of specialized solutions to the broadcast market since 1968, is first to integrate BACH Liberty into their highly automated audio and intercom system. These products from HUGEL originally supported the popular Dante protocol and now fully comply to the AES67 & SMPTE ST-2110 standards thanks to BACH Liberty, thus enabling broad 3rd-party interoperability and the ability to mix audio with video over converged ST-2110 IP networks, as required by broadcast systems. In short, BACH Liberty has enabled HUGEL to address more markets without additional investment in hardware development.

Commenting on the new product launch, Nestor Amaya, Ross Video’s VP of Infrastructure, notes “I’m very pleased that the Pro Audio industry now has the freedom to plug into new markets and applications based on truly open technologies from a stable supplier such as Ross Video. The open control technologies found on BACH empower manufacturers to bring innovative new workflows and user interfaces to the benefit of end users worldwide. BACH has the Liberty you’ve been waiting for”.

XPression V.85
The XPression team at Ross Video have announce that XPression Version 8.5 — the most advanced real-time motion graphics engine software Ross Video has ever released, will be shown at this year’s IBC show in Amsterdam. An evolution in XPression, Version 8.5 continues to deliver an intuitive and cost-effective product which is used in workflows from simple character generator tasks all the way up to complex virtual environments to a whole new set of customers.

“We’ve been working hard to provide enhancements to XPression which really address the needs of our customers.” explains Patrick Twomey, Director of Marketing Product Management for XPression. “Partnering with our existing customers to deliver new ways to successfully engage their audiences is its own reward.”

This year at IBC, Ross Video is also extending the capability of Tessera, XPression’s multi-engine synchronization option. Expanding on the existing toolset of Tessera to populate large monitor arrays, Ross Video has developed the MOS tools to create and schedule in-studio multi-monitor content creation using templated workflows. This transferred the task of monitor fill from the technical team to the content creation level of the newsroom users.

“Newscasts have trended towards presenters beginning their story-telling process to the viewer in the studio, in front of some type of multi-monitor array.” explains Twomey, “Ross Video recognized the importance of empowering the newsroom user to create their own visuals for the monitors, using the same drag-and-drop workflows they already know how to use.”

Ross Video will be demonstrating the BACH Liberty Module and XPression V.85 throughout IBC 2018.