In addition to these new options, Grass Valley’s full live production portfolio now features solutions for content in any format across every step in the broadcast production chain. Some of these solutions, including the LDX 82 HD/3G cameras with extended dynamic range (XDR) capabilities and Kayenne K-Frame S-series production switcher with full multi-format support including 1080p and 4K UHD, were demonstrated in the Live Production area of Grass Valley’s stand at IBC. 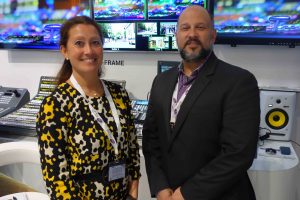 Patries MacIntyre, EMEA PR and Tim Thraves, VP of Marketing and Communications, on the Grass Valley stand at IBC2017

At the show SVG Europe sat down with Grass Valley VP of Marketing and Communications Tim Thraves to gain an overview of the company’s approach to the markets it serves, including the sports/live production space.

“In the past we’ve tried to talk about our entire product portfolio – which is enormous as you know. So we’ve been trying to instead talk in a more customer-friendly tone, about live production, news production, content delivery, and the networking that runs underneath it all.

“In the live area, we’ve got the high-end UHD Kayenne and K-Frames, some of which we’re introducing for the first time in Europe. The key story there is UHD and HDR for live: we’re hearing a lot more that our customers are interested in HDR and less so in 4K.

“There’s parts of the world where 4K is a much bigger play – but almost everywhere else it’s a slow transition. What is a more visible, noticeable difference for most is HDR — rather than going from 1080p to 4K. It’s more tangible.

“On the news production side we’re highlighting some new elements such as the Karrera F-Frame. Then behind that we’re showcasing what we call our Value segment, like the Focus 75 Live cameras and our K-Frame V-series switchers and GV Korona switcher panels with GV Matrix.

“These are products we think will open up to different customers such as universities, churches and businesses that want to bring their production in-house. It’s a marketing challenge to differentiate the high end from the low end without cannibalising the top end of the market.

“The other big stories here at IBC are virtualisation/cloud and IP. We’ve got some interesting products there and we’re building products that have been built for the cloud rather than retrofitted to the cloud. For the non-live sector, those are the big stories. We’re allowing our customers the flexibility to make choices as they see fit – so they can switch to IP when they’re ready.

“It’s been a great IBC. The booth has been packed all the time. What we’re hearing is pretty much aligned with our own messaging: people are asking about IP and HDR. The IP Showcase room is packed all the time. At Grass Valley we’re a voice of the industry and we’ll continue to help drive standards, whether it’s SMPTE and 2110 or AIMS and the Alliances there.”