Interview: Mediapro CTO Emili Planas on ensuring LaLiga is the “most technologically advanced” league in the world 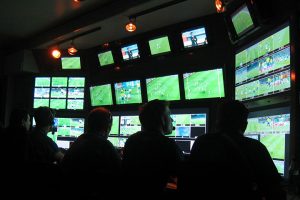 Through its technology, production and rights partner MediaPro, LaLiga, the top division in Spanish football, is constantly seeking to improve the TV viewer experience.

Here, Emili Planas (pictured, below left), the chief technology officer and operations manager at Mediapro, talks to SVG Europe about the company’s work so far and outlines what might come next.

How long have you been working with LaLiga? 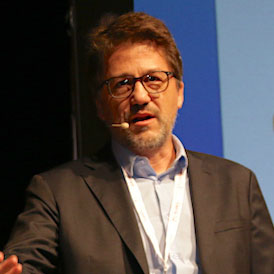 We have worked with LaLiga since we started in this business [in 1994], in some way or another. At the time, international distribution of domestic leagues was still in its baby shoes, yet we helped LaLiga in the distribution of its content, mostly highlights, to countries that had a specific interest in the games of teams with players from their national team.

From this, we started to distribute live games, integrating our production and rights-syndication knowledge.

The activity of the Mediapro group with the league has been, since its beginnings 24 years ago, linked to football and sports rights. Very soon we began to collaborate with the league in the distribution of its content internationally and in the production of the matches.

How has your relationship developed over the years?

The relationship is fluid and very positive. For years, the league has honoured us with its confidence and we have tried to live up to it. The best league in the world must also be the most technologically advanced in terms of television broadcasting and content elaboration.

What do you bring to the relationship? Do you suggest technologies proactively? How does it work?

There are no rules nor protocol. In Mediapro Group we try to incorporate constantly new ideas to our production processes. We have been pioneers in the implementation of many technological innovations. For its part, LaLiga always seeks to improve its retransmissions, such as providing them with greater added value.

The best league in the world must also be the most technologically advanced in terms of television broadcasting and content elaboration.

The demand of the league and Mediapro’s willingness to be leaders in our field unite and give us as a result the most advanced retransmissions that can now be seen.

We keep in constant contact with LaLiga, both to advise and to suggest.

What have you worked with at LaLiga in terms of tech and its roll out over the last two years?

There are very visible novelties, and others that are part of the back office and changes that affect the usual operation. 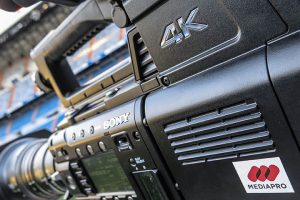 UHD is among the innovations that have been brought to LaLiga

We have collaborated in the elaboration of the television Broadcast Regulation book, which is the reference guide for all those involved for a maximum level production, and we are involved in all the novelties that have been made in the audiovisual production of the competition, and in technical products associated with the content. These include Mediacoach, AutomaticTV for Tactical Cam, the operation of the Systems Intel 360, Omni4Sky, RF cameras, UHD and HDR, Superfeed, IP connectivity in the stadiums and remote production.

What are the challenges of working with a large football federation?

Each of the competitions in which we are working, not only the leagues, have special needs and therefore receive personal treatment. In the case of LaLiga ,we continue to work day by day with the objective that it remains the best league in the world.

Each league has its challenges. Although some are common, we can say that the main challenges are in the definition of the new formats of content over the top (OTT), in the growth of the productions in UHD and HDR, and in the management of the new technologies applied to the production.

We believe that we can provide added value in the integrated management of the video assistant referee (VAR) with television production, where we have a lot of experience.

What are you working on with LaLiga for the future?

Virtual reality (VR), augmented reality (AR) and all that we refer to as xtended reality (XR), are future projects in which Mediapro are working, both for LaLiga, and for the rest of the competitions and customers we have.

From Mediapro, we work jointly with the managers of the traditional production, with the new departments of XR, VAR, OTT content, etc, so that we are able to optimise the costs associated with these new technologies, as well as the startup times, and the technical and content quality needed in the implementation of these new technologies.