After announcing development at last year’s Integrated Systems Europe, Panasonic followed through on its promise with the launch of a 4K projector at ISE 2015 in Amsterdam this week. The PT-RQ13 4K+ laser three-chip DLP projector reaffirms Panasonic’s commitment to better resolution: according to the company, the RQ13 projector is the first 4K+ quad-pixel 10,000-lumen laser projector.

“Panasonic [was] one of the first companies to introduce solid-state illumination into projection,” says Hartmut Kulessa, marketing manager, projector products, Panasonic Visual System Solutions. “We launched in 2013 the first 3,500-lumen installation projector. In 2014, we increased the brightness level to 6,500 lumens and opened up more opportunities in larger meeting rooms, lecture halls, and auditoriums. And, later on, we will see the cost advantage this is bringing to the end user in education but also the rental and staging markets.” 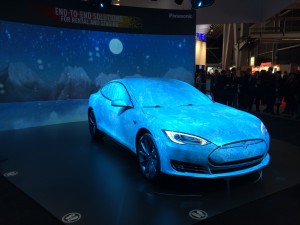 Panasonic is using a Tesla Supercar to demonstrate its high-brightness projection technology at Integrated Systems Europe 2015.

While Panasonic projectors have found great success in higher-education and museum/gallery applications, they promise unique opportunities in sports production as well. Panasonic’s flagship large-venue DZ21K projector was developed for the 2012 London Olympics and was used to bring the Opening Ceremony to life inside Olympic Stadium.

Anchoring Panasonic’s booth, which increased in size this year to 600 sq. metres, is a Tesla Supercar, which Panasonic is using to demonstrate its high-brightness projection technology. Working in collaboration with d3 Technologies and The Projection Studio, Panasonic fed a three-minute loop of content into d3’s servers, which matched the pixels on the car and projected a 3D map onto the car via six DZ21K projectors installed in an overhead truss. A definite crowd-stopper, the installation was designed to demonstrate innovative uses for projection within the staging-and-events market.

“The theme of our booth is End-to-End Solutions,” says Jan Markus Jahn, director of visual system solutions, Panasonic, “so there is something for everyone from Panasonic this year.”