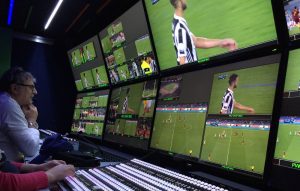 Inside the latest highly-specified OB vehicle from Cinevideo, Dolphin 7.0

The latest OB van developed by Cinevideo, Dolphin 7.0, was used during HD coverage of the May 13 Seria A Roma v Juventus match. The vehicle was used both for the host production of the game as well as the Sky Italia customisation thanks to its second internal gallery with independent audio and video capacity.

Featuring 14 HD cameras and two super slow motion 3x cameras, the truck was sited at the Olympic Stadium in Roma for the match. Cinevideo technical manager Andrea Buonomo offered some more thoughts on the use and format of Dolphin, which is based in Pescara and is the seventh truck in the Cinevideo fleet.

“The event was tackled by Cinevideo in the double configuration of international host broadcaster, but also for the customisation and integration for Sky Italia,” said Buonomo. “Our mobile vehicle is particularly versatile and has been designed to host two [contemporaneous] video events, one for international feeds, and one for the national personalisation feed and two simultaneous audio features, just as happened in this event. A total of 15 Sony cameras plus one I-MOVIX were used in the field.

“The production areas are completely separated over a room of about 60 square metres, made in a three-axis that is 12 metres long and 6 metres wide in operational mode; it includes three expansions, two on one side and one on the other,” said Buonomo.

“The event required a considerable deployment of technology and people, in fact, some 50 technicians were hired, 38 for the host part and a dozen for integration. Seventeen camera operators, seven RVM technicians for replay (six plus one for Sky), four shared camera controls [were accommodated; there were also] audio assistants, video mixers, audio mixers, production managers, director and others,” he said. 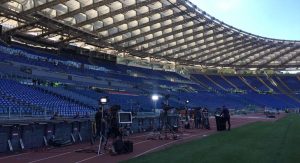 Buonomo adds that the global setup was quite complex as it also included two additional mobile vehicles, with OB1 taking care of the personalisation for the broadcasts made by Mediaset and another gallery to create the personalisation for RAI broadcasts. Three feeds were relayed to Lega Calcio: one national, one international and one for the Asian countries. The transport of the signals took place on fibre and was mostly taken care of by RAI Way.

The camera placement resumed the classic standard for the Serie A as desired by Lega Calcio, which provides four points of shooting from the main stand, the central 1 and 2, plus two more placed on the 16-metre position for the off side. These comprised a camera at the centre of the field and a steadicam operating in RF mode that deals with the pre-game period including the arrival of the teams, and during the game itself operates on the left side of the field. 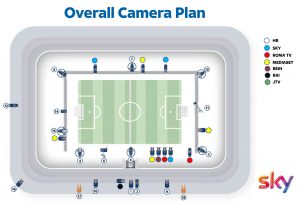 On the right side of the field, a back goal configuration consisted of a jimmy-jib mounted in 11-metre mode, a camera placed on the north curve with a long lens, and then two rear cameras – one on the left and one on the right.

For the customisation of Sky, two more cameras were equipped with long optics, placed in reverse, while Mediaset had two other cameras in the back goal for its coverage.

The audio was mixed in 5.1 and to support this and provide the necessary ambient sound all the cameras were equipped with Sennheiser directional microphones. Other ‘ad hoc’ mics were also provided in certain locations around the stadium. For the purposes of audio control, a Calrec soccer app was installed on a tablet that allowed faders related to the various microphones to be adjusted as required.