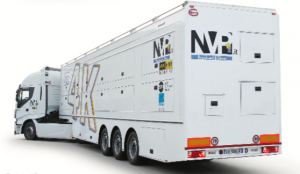 Headquartered in Sicily, international TV production specialist NVP has been an active player in the market since 2007. The company has interests in broadcast production of many different types – including sports, concerts and entertainment shows – for which purpose it has an extensive and versatile fleet of OB vehicles.

Having introduced OB4 in 2017, NVP is now preparing to launch OB6 this September. Not by chance are the two vehicles described as ‘twins’ because they sport similar characteristics. Whilst the OB4 has been nicknamed “the gentle giant”, the OB6 has – logically enough – been labelled “the big brother”.

Both incorporate 14-metre trailers and have been designed to support 4K /HDR production. They are equipped with dual video and separate audio stages, with wholly separate physical inputs. The two distinct crews can operate without any interaction or interference, as per recent requests from the Italian market. Even on the new OB6, the technical area sports a separate, dedicated access point.

Both trucks can be used simultaneously to meet the demands of large events, while both separately or together the exacting needs of individual productions can be satisfied. To this end, the trucks have been designed with ease and speed of reconfiguration to the fore.

The layout of the vehicle follows the general technical concept that calls for it to support possible demands of the market today and tomorrow. The core manages the 28 4K HDR cameras, for a total of 30 Ultra HD channels of incoming video and 24 Ultra HD output channels. Everything is managed by an unlimited VSM operating platform that allows the virtualisation of any system.

The 14-meter platform is equipped with two expansions. Onboard the SAM platform manages the hybrid IP-3G-fiber core, whilst a Kahuna 9600 full video mixer with six boards has been implemented alongside a modular Maverick double bench that drives seamless monitor walls, fully assignable to the directors’ requests.

The meticulous design process lasted five months and was undertaken by NVP’s team, led by co-owner Ivan Pintabona. Of particular note is the use of the VSM system to interface with all of the systems and thereby create a superior management system that can be adjusted remotely (indeed, the related app can control all the functions of the OB van from a remote location).

Pintabona says: “It is a vehicle conceived with a futuristic vision able to be a reference for at least a decade [not least with regard to remote operation].”

Integrator for the project was Video Progetti, whose team liaised closely with NVP throughout the eight-month build period.