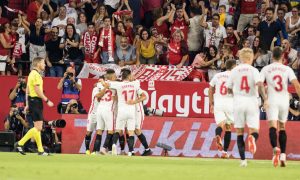 LaLiga is now travelling at high speed in Spain

Railway company Renfe Operadora has been announced as the ‘Official Transport’ for LaLiga during the 2019-2020 season, beginning on 16 August.

The company has reached an agreement with LaLiga that means it will include all LaLiga League matches as well as the main games from the Champions and Europa League in its PlayRenfe content platform, which is available on its trains for customer use.

LaLiga games will be available initially on Renfe’s Alta Velocidad Española (Ave) trains. Ave are high-speed trains on the Spanish rail network, travelling at up to 310kmph. In addition, Renfe will incorporate football programming into its low-cost train offer, which will be operational from 5 April 2020.

The agreement with LaLiga will also allow the Renfe brand to be seen on LaLiga’s fan channels, so Renfe can promote travel offers for football matches.

The programme schedule of the matches can be seen on Renfe’s and LaLiga’s websites.