Live from EURO 2016: Behind the studio operation at the Champ de Mars Fanzone 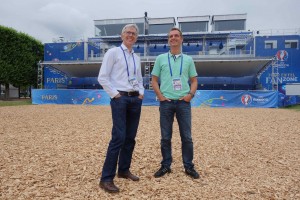 One of the most striking images of UEFA Euro 2016 is BBC Sport anchor Gary Lineker making his introduction from a studio that appears to be floating above the tree line with a view of the Eiffel Tower in the distance behind his shoulder – plus up to 100,000 people in vision in the Fanzone at the Champs de Mars in Paris. Not just the BBC: Globosat Brazil, ORF Austria and SVT Sweden also have studios in the Fanzone studio complex for UEFA EURO 2016.

The studios sit on top of a temporary scaffolding structure that is 13 metres high and 33 metres wide, with two staircases and a goods lift. The total area covered is nearly 200 square metres. VPT, a German company, was the main supplier for scaffold and studio build. 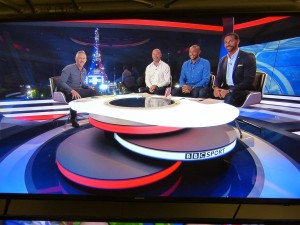 UEFA Head of TV Production Bernard Ross said, “at the Champ de Mars Fanzone are bespoke studios that are a collaboration between UEFA, the Ville de Paris and Plazamedia, providing a facility for four broadcasters. The Ville de Paris came to us and said, ‘for the Olympic bid and the EURO we’d like to make a statement by having studios in the Fanzone for the first time ever. Can UEFA support it?’

“It’s an iconic location and a great statement to have broadcasters located in the Fanzone. UEFA were able to connect it to the IBC, using both the EBU satellite network and the 70,000 km of Orange fibre network, with Lawo adaptors. Bringing all these parties together has been a challenge, but ultimately it has been a very successful project,” said Ross.

Joachim Wildt, UEFA EURO 2016 Fanzone Paris Director of TV Studios & Media Base, described the arrangement and construction of the studios. “The studios you can see on top are BBC, SVT, ORF and Globosat. Sitting on top of the studios is the camera for the official UEFA beauty shot which goes to every broadcaster, and also the UEFA Vistacam, providing a super-wide shot of the Fanzone for broadcast partners to use as a live studio backdrop, is also positioned on the rood.

“On the layer below are the fully equipped stand-up positions we operate together with Eurovision for rightsholders and non-rightsholders for 10 minute slots – and one position is even equipped with three cameras. There’s a rate card; you book through EBU Eurovision and we supply the equipment.

“At the very front, you see the media platform of Ville de Paris, for media and photographers and so on. They manage that platform.

“For this project we have worked with Ville de Paris, UEFA and Lagardère Sports – they operate the 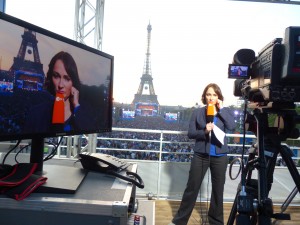 Fanzone on behalf of Ville de Paris. At this EURO, UEFA does not own the Fanzone – in contrast to the World Cup, where FIFA owns the Fan Fest. Here the host city controls the Fanzone,” said Wildt.

“We had the full support of UEFA when we started this project over a year ago – it was Bernard Ross, Wolfgang Quinkenstein and myself. Soon after the BBC became our anchor tenant. Without UEFA, Ville de Paris and the BBC we would not be here.

“About 18 months ago the discussion started,” Wildt explained. “Should we provide studios, as a UEFA service — as HBS did at Copacabana for the World Cup 2014? We knew that the BBC had asked UEFA if it was going to provide anything. At this stage the host broadcast project for EURO 2016 was already pretty advanced. I agreed with Bernard to do it under the Plazamedia umbrella. And so I built up a team at Plazamedia, looking for experts to build a studio in Paris. That’s when Wolfgang came to the project.

“I was looking for someone who had done this before; Wolfgang had done it at South Africa 2006 and Poland 2012 and also for the 2012 Olympics in London. He’s actually a TV director for the Bundesliga – but every two years he builds studios!

“I agreed with UEFA we would need at least three other broadcasters in addition to the BBC in order to finance the project. Otherwise it would be difficult. UEFA agreed to support the project and take care of some of the connectivity to the IBC at Porte de Versailles, via EBU and Orange.

“Then I would say we were ‘lucky’ with Ville de Paris, because this project is part of their Olympic bid. They supported us to build a broadcast operation within their Fanzone, because they wanted to promote the activities of Ville de Paris to the world,” continued Wildt.

“From that day, when we identified this position and received the verbal support of Ville de Paris and UEFA, we brought in the BBC – making contact with Phil Bigwood initially. I said “Phil there is now an opportunity; we think we’ve found something.” And from that day, Charlie, we’ve worked with your guys on a daily basis!” 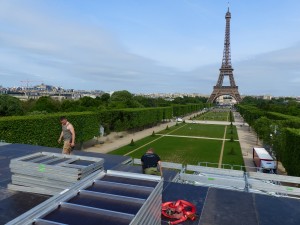 BBC Sport Technical Executive Charlie Cope: “We had been looking elsewhere in Paris as well. We had a number of parallel options running, to go it alone. But there’s clearly a benefit here, on a number of fronts. One, economically if you can share the base cost with other broadcasters that’s obviously a benefit. Secondly, particularly in Paris, we knew from hard experience that obtaining the necessary permissions is really difficult. If you have some host backing, in this case UEFA, clearly it de-risks it from our point of view.

“UEFA and Plazamedia, through Joachim and Wolfgang, came up with a proposal that began to get legs. It had backing from the Paris authorities and it became an interesting proposition for us,” said Cope.

SVG Europe: What challenges did you face in building this facility in such an iconic location?

Joachim Wildt: “If you’re talking of challenges around this project, I can point out a tree that sits within the scaffold over there. We spent a couple of weeks negotiating hard with Ville de Paris about removing that tree – but the tree is still there and we built the scaffold around it!

“We sit on a concrete platform in Champ de Mars. There was a day when 15 trucks arrived and we poured that concrete into a public park. You can imagine!

“We took grass out and trees out, and we have to return everything when we leave. We’ve built a live broadcast centre within a public park of Paris, with all the authorities and permissions you need, in a Fanzone, which is a completely different set-up to an IBC. This is also the first time we’ve had a broadcast operation of this scale located within a Fanzone, so security was also a major concern for us.” said Wildt. 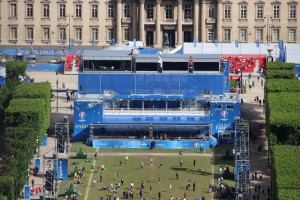 Wolfgang Quinkenstein, UEFA EURO 2016 Fanzone Paris Head of TV Studios & Media Base said: “From the logistical standpoint, we had to bring in power. We run toilets here, which means we have to bring water in and water out. From the logistical viewpoint the Fanzone is quite good because they often use this area for events and there is space to come in with trucks and so on.

“However, if the Fanzone is running and we need to bring something in, that is more or less impossible. Every day during the tournament we have to bring everything in before 11am – for example if we need fuel for the generators,” said Quinkenstein.

“We arrived at the beginning of May, to start building the platform. Pouring concrete, putting in the 53 containers and so on. We had some initial problems, but we solved them. For me the biggest benefit is having four broadcasters here, like a family. If you have cable missing, you can’t go home to get a replacement – but you can ask your neighbour here and they will help. We had a big lighting problem with Globosat one day, where all their lights went down three hours before live. Immediately, all the guys came with spare lamps and wanted to help. This is really great,” he said.

Joachim Wildt: “There are many benefits to broadcasters by being in the Fanzone. You have that Eiffel Tower view, and of course you can send ENG crews down into the crowd to pick up the emotion…

Charlie Cope: “Without question. In terms of the position it has worked as well as we hoped it could work. For us its about what we’re giving back to the audience. Here, our talent and front-end team are part of the atmosphere. That does reflect in the coverage, it’s something we value.”

SVG Europe: Charlie, BBC Sport has a number of cabins on site; how extensive is your operation here?

Charlie Cope: “The solution here with these cabins works really well for us. In Rio, the cost of connectivity drove how we looked at everything in terms of economics. Here, because we’ve got great connectivity back to the UK, we’re able to do a certain amount of remote production and editing which means keeping people back in Salford.

“Our studio here is an 11 x 9 box, with an LED-driven set design. It’s a standard four-camera set up, but we’ve got a Stype AR rig on the jib camera, which we’ve used extensively for player profiles and analysis in the presentation. We’ve also got a fifth camera on the roof, which is an ACS remote camera.

“They’ve just done some development work for us as well, taking all the camera data off the ACS camera head and allowing us to put AR on that as well – so we’ve actually got a dual AR that allows us to extend our graphics offering onto the Eiffel Tower and FanZone That has worked very well,” said Cope.

“This operation is focused around bringing the event to the audience through the presentation position and the talent. All our output platforms can draw on the talent here, our big names and our guests. That’s the reason for being in the middle of the event. 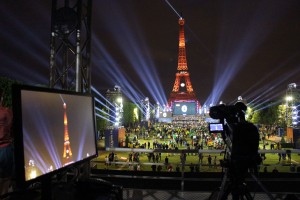 Paris at night: View from the pres terrace to the FAN ZONE and Eiffel Tower light show beyond [Photo supplied by UEFA EURO 2016 Fan ZONE Paris]

“The main production gallery here drives the primary TX output. For our quality of output and editorial, and from a financial standpoint, we think it works best for us to have a single mode of operation here that is focused, and then we work through UEFA to do unilateral stand-ups to get pitch-side content. Additionally we have some roving shoot-edit crews who follow the home teams [England, Northern Ireland and Wales].

“The rest of the EURO logistics, switching and feature making operations are at the IBC. And all of our core sports news, online services, and a lot of our post production is back in Salford. We do as much as we can back at base, and we try to put the value here on screen,” he said.