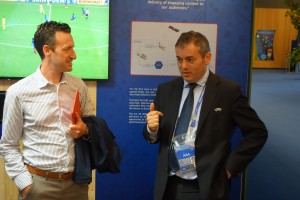 At the IBC in Porte de Versailles EVS Marketing Senior Vice President Nicolas Bourdon took SVG Europe through the primary role the company plays in the UEFA EURO 2016 tournament TV production. “The central media server has a capacity of 4,000 hours in hi res/low res, which is based on an EVS system. The Livex service offers services to 14 different UEFA Broadcast Partners (UBPs) to access extra content through the system,” said Bourdon.

“At EURO 2016 EVS has a support team of 22 people spread through the IBC and the different sites across the country. We are also providing additional services for multimedia distribution together with deltatre, They hold the whole multimedia solution, using the EVS C-Cast for highlights and multi-angle clips to provide second screen solutions. Deltatre commercialises this offering for UEFA, and they come to us to provide the multi-angles through the cloud. They do the live streaming, the stats and the graphics,” he said.

At each of the ten venues, EVS supplies 16 XT3 live production servers – 12 servers to record up to 45 camera feeds, including SLSM and Hypermotion; two for clip compilations and storytelling (best match action using MultiReview and emotional reactions of players and fans using IPDirector); one server for match highlights with LSM Connect and one for in-stadium fan entertainment (FANtertainment) on big screens, which is a separate service for the Fan Zones throughout France.

On site at each venue, EVS also has one C-Cast Agent connecting content to the C-Cast cloud delivery to mobile apps, and one C-Cast Agent to deliver high-res media to the IBC. Also deployed is EVS Ingest Funnel, for plugin and ingest of ENG content for transfer to the IBC.

At the IBC, EVS supplies the Livex central ingest and media platform. This captures eleven live feeds per match (up to 48 feeds recorded simultaneously on Match Day 3), press conferences and interviews, ENG contributions, advanced edits of highlights and player profiles, multi-angles from C-Cast and descriptive metadata of ingest content.

The Livex infrastructure at the IBC includes nine XT3/XS servers to ingest the multiple feeds; XStore SAN shared storage with 4,000 hours capacity; IP Director production and management suite with 13 IPDirector stations to log content and IPLink for Adobe Premiere Pro. “We oversize the system because we have double-headers; in the Group Stages there are two or three matches occurring in parallel, so we need to be able to ingest maximum capacity,” said Bourdon.

For the multilateral production, the service includes 17 IPDirector stations for content browsing and media management; 38 desktops with IPBrowse licenses; 36 Adobe Premiere Pro editors with IP Link; and IPDirector database; and five XFile3s for achieve and disaster recovery. For unilateral production at the IBC there are three options combining IPBrowse, IPWeb licenses and IPDirectors plus XT3 for playout.

EVS, working with Aspera, is also providing a C-Next and cloud service to help connect people and sites.. This involves Ingest Funnel for P3, GoPro or Arri Amira cameras and an Aspera connect and transfer service via the cloud, with remote access to multi-site live recording.

Compared to EURO 2012, what’s new in the EVS realm is a new connected platform permitting the sharing of content between sites. This encapsulates live recording of feeds using C-Next and Xplore; ENG content using Ingest Funnel and Aspera; and archives transferred to Nyon and available for sponsors two hours after the match.

Also new is the new clip compilation service from venues to the IBC, with best match reactions using MultiReview and emotional reactions of players and fans using IP Director. Editing with Adobe using the IPLink plugin interface to access Livex content is new, as is an RSS feed service enabling UBPs — those willing to build their own stories — to subscribe to news reports prior to events.

“Finally, just so you know, today UEFA is undertaking a test remote production between IBC and the Stade de France [June 27, Italy v Spain] using the EVS DIVI system, both HD and also 4K at SMPTE 2022-6. We have a PM in the stadium, and the control panel here at the IBC. We do the same with the server, so there’s one located at the Stade the France and an LSM remote controller here, fibre connected,” he said.

“It is a first test, a pure proof of concept. Working together with UEFA, we can start to prepare the considerations for the next EURO – which will be in 13 different countries. They are intensively looking at different solutions for future remote connectivity,” said Bourdon.