Gearhouse Broadcast has supplied a range of facilities for ITV Sport in Russia, including MCR at the IBC and key elements of the AR studio in Red Square.

The rights holder is broadcasting live to the UK from its Gearhouse-built studio in Moscow’s Red Square and relies on the production infrastructure Gearhouse installed for it inside the International Broadcast Centre.

Within the IBC, which is located at Moscow’s Crocus Expo International Exhibition Centre, Gearhouse has provided ITV with facilities including production offices, a master control room and a transmission gallery. This is then linked to ITV’s studio that’s been built within Red Square. Work on the studio took over a year, and a mock-up was built in London before everything was shipped to Russia to ensure there would be no delays once it arrived on site. There is also a full talkback capability between the studio and ITV’s production team at the IBC.

Gearhouse Broadcast Engineer in Charge Nick Bowey told SVG Europe, “It has been a very good joint operation, over months – years – of planning, really. The integration of AR and VR at the studio certainly posed a significant challenge, getting the delays and all that part right. 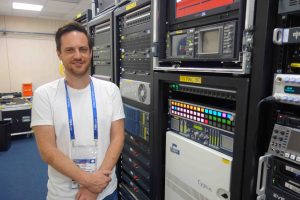 Gearhouse Engineer in Charge Nick Bowey inside the ITV Sport CAR at the IBC, July 1

“We had to delay other cameras to compensate for the AR which is done off the jib. Having to stop the movement of the screens in the background, when you go to a close-up. That’s been tricky. The engineers there had their work cut out for sure,” said Bowey.

“There were some significant concerns also about getting everything in across the Russian border, considering the political landscape back home – putting measures in place to make sure that the kit would get here on time,” he said. “Sometimes these logistics are overlooked – but that was a big part of the project. Plan A, Plan B, Plan C, what if this and what if that; insurance policies to ensure that the production would still go forward, with tight timescales. There was little room for error.

“We have Lawo Nova matrices handling all the audio flow and two Lawo MC56 for the mixes. We also have an off-tube booth here at the IBC: because of the logistical challenges of Russia, commentators aren’t able to get to every booth.

“And VSM is over everything: all of the audio routing gets taken care of, including gadget control, delays, on a variety of touchscreen panels. VSM also takes care of all the timing between match circuits and commentary circuits,” said Bowey.

“Hyperactive actually supplied the edit suites for ITV; Gravity Media Group is now an owner of Hyperactive so they’re effectively under the same umbrella. There’s Avid ISIS shared storage, connected to the EVS network and archive servers, with Avid Interplay.

“There are five IP Director stations in total, all interconnected to the nearline EVS and also the FIFA Max Server content provided by HBS. Any content that we want direct from HBS, we trigger a process here that sends a request to HBS and it then arrives on our servers here.

“As it’s an online log-in they can even do it from their hotel room or from the Red Square studios, using C-Cast to make sure all of that back-end works with low-res browsing and then the high-res landing on our servers,” said Bowey.

Roger Pearce, Technical Director, Sport at ITV said: “For a job of this scale, you need a trusted partner not just with experience of delivering the technical set up, but also of transporting large quantities of professional broadcast equipment to somewhere like Moscow. Gearhouse did a great job for us four years ago in Brazil and have been very proactive in having a Plan B and C ready should we need it this time around.”