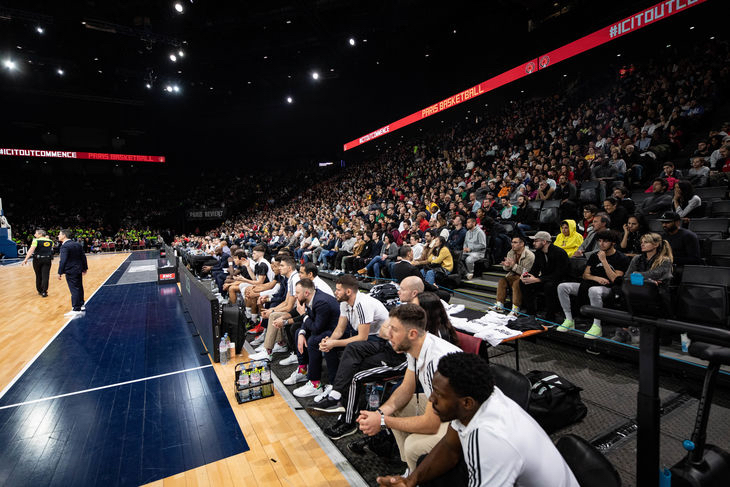 Remote production trials are carried out regularly in France but for the Pro B clash between Paris Basketball and Aix Maurienne broadcast on Sunday 26 January on RMC Sport, AMP Visual TV delivered a real live remote production that went to air.

“At RMC Sport we like to implement new workflows. We had been thinking about producing a live remote production and not just a trial for quite some time, so with AMP Visual TV and our own Letsee team we chose a basketball game,” said Luc Pannier, director of broadcasting and production for the Altice Group, owner of RMC Sport.

This is the first time a Pro B (second division of the National Basketball Championship) regular-season match has ever been held at the AccorHotels Arena in Paris-Bercy – two days after the NBA Paris Game 2020 between Charlotte and Milwaukee.

Equipment used for coverage was identical to that of a traditional match produced with the help of the IXI Live mobile unit. Seven cameras were deployed around the basketball court with five camera operators manning the three cameras on the sidelines, plus one for wide shots and one for close-ups, with two minicams positioned behind the hoops.

“We placed a sensor at the base of the wide-angle camera that, depending on the shot, automatically enabled the minicam to follow the direction of the action. The interesting thing about our set-up is that we used traditional 300Mb fibre broadband instead of a costly dark fibre network to send seven video and audio signals as well as all the other data,” said François Valadoux, deputy CEO for technical resources at AMP Visual TV.

On-site at the AccorHotel Arena in Bercy there was a pared-down production crew of five camera operators, some assistants and two sound engineers. At the AMP Visual TV media centre (which has moved from the 15th arrondissement of Paris to join the nerve centre of the group’s studio facilities situated at la Plaine Saint Denis, close to the future Olympics village), the crew members who usually work in the IXI Live mobile unit were calling the shots.

They included a director, LSM operator, digital imaging technician, sound engineer and, for the graphics, a dedicated broadcast designer from Tangodelta, services provider for the Professional Basketball League. Worth mentioning is the fact that the commentator and the sports analyst were also in a remote location and just the on-air announcer was present at the stadium to be on set and conduct interviews. 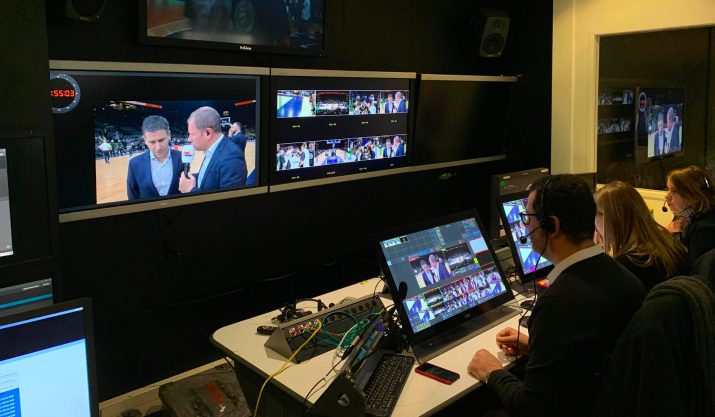 “As far as I am concerned, it makes no difference that we are not on site. Directions are given in real-time (as well as tally signals for the camera operators),” said match director Raphael Gaborieau.

“Before the match, I was told there would probably be a one-second delay between transmitting and receiving the signals back at the studio but the delay was barely a quarter of a second.

“For the remote production I used a ViBox, like I normally would in the production truck and I could even have single-handedly managed the slomo replays if needed,” said Gaborieau. “However I chose to go to the stadium to check the camera positions and for a briefing with the operators on site. Otherwise we could have simply used skype to visualise each position.”

Cost savings? Not just yet…

At present, a single one-off remote production does not cost less than normal on-site production. There will be a cut in costs when the professional league (or any federation) and the championship broadcaster agree to tweak the schedule.

In fact, the economy of scale can only be effective if production teams produce a series of two or even three matches a day or even more over a single weekend.

This will surely happen in the short to medium term for a good number of championships as financial pressure is severe in the world of sports broadcasting production.