Live from PyeongChang: At its first Games, the Olympic Channel finds its place

Following its launch immediately following the completion of the Rio Summer Games in 2016, the Olympic Channel is here in PyeongChang supporting its first live Olympics in the history of the company.

And while, in most of the world, the Olympic Channel does not hold any live broadcast rights of these Olympics, its channel and website are offering robust Olympics coverage in the form of highlights, original programming, updates, and much more.

The Olympic channel, which does not own live broadcast rights in many of the nations it works with, broadcasts 24/7/365 in 11 languages around the world and, for many of its nation partners here in PyeongChang it is serving as a highlights, original programming, and news destination (Olympic Broadcasting Services’ Olympic News Channel has been rebranded to Olympic Channel News and delivered to the network). 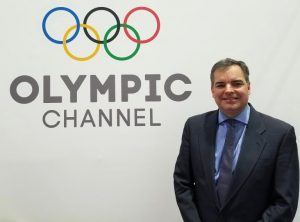 To paint the picture for American readers: if the Olympic Channel isn’t broadcasting the Olympics, then what is it doing? The channel’s ultimate goal is to serve as a home of many of these Olympic sports and bolster the Olympic games both during the Olympics and in the months and years when the Olympics aren’t going on.

Many Olympic athletes come into our homes and become stars for two weeks and then they fade away until the next Games. Olympic Channel is here to keep that fire burning year-round.

“I’ll borrow a line from [NBC’s] Mike Tirico from when we launched the linear channel in the US: ‘these athletes just don’t show up out of nowhere for two weeks every four years and then disappear,’” says Mark Parkman, general manager of the Olympic Channel. “These [athletes] are the elite of the elite and they’re there 365 days a year as well. Now we have a platform, both online/mobile and linear television, to tell their stories 365 days a year.”

Much of the Olympic Channel’s efforts here in PyeongChang is centred around olympicchannel.com and its mobile apps, which have new features including embeddable widgets and media player (that can be used by partner rightsholders and various federations).

In seven countries in the Asian subcontinent (India, Pakistan, Sri Lanka, Maldives, Buton, Bangladesh, Nepal, the Olympic Channel is the live rightsholding broadcaster of the PyeongChang Games. There the channel is offering live coverage of the Olympics on its own streaming platform on its website, as well as across YouTube and Facebook. While there are only four athletes from those combined nations and Parkman admits that part of the world isn’t known for its affinity for the Olympic Games, that makes it a prime target for its Olympic messaging.

“It’s a youthful and highly mobile portion of the world, says Parkman. “We wanted to get as wide a distribution as we possibly can and to build the brand, Olympic Channel, in that region , which is a huge region. It’s an important growth market for the Olympics themselves because it’s lots of young people using mobile phones; an attractive, emerging audience. It’s one of our priorities to engage with that part of the world.”

Olympic Channel also made headlines prior to the Games with its partnership with SnapChat. The media company’s original series Far From Home is currently available for viewing on Snapchat’s Discover page and a set of Olympic-themed filters, lenses, and stickers that offer Olympic Channel branding to further spread the messaging.

The Olympic Channel is headquartered in Madrid, where more than 100 staffers are rotating around the clock to program the various platforms throughout the Games. In Madrid, the channel has two control rooms, plus 12 edit suites, and various voiceover rooms. Here on site, to streamline their efforts, the Olympic Channel’s social and news teams are working together to churn out a continuous stream of content for Facebook, Twitter, Instagram, and Snapchat.

Olympic Channel is also furthering its commitment to storytelling with its premier series, Five Rings Films. The channel is set to launch its debut documentary film, The Nagano Tapes, chronicling the story of the 1998 Czech Republic men’s ice hockey team that took gold at the first Olympics that permitted the participation of NHL players. The film debuts in the U.S. on February 28 on NBCSN.

“We’ve seen how others have been able to have incredible success in creating sport films and documentaries that resonate with an audience and, in some cases, go beyond the sport audience,” says Parkman. “We think that’s what we’re gonna try to do as well. We believe strongly that the original programming that we can create needs to be of a quality consistent with what you see when you see the five rings. You see excellence. You see the best in the world. We want to be the same thing.”

LISTEN: Olympic Channel GM Mark Parkman Joins Us As a Guest on The SVG Podcast

For more of our coverage from the PyeongChang Winter Olympic Games, including interviews, videos, podcasts, and more, visit our SportsTech Live Blog.