BT Sport used the British Grand Prix at Silverstone as the venue to debut its new MotoGP touchscreen analysis tool, which was developed in-house to provide its presenters with extra tools to bring viewers closer to the action. 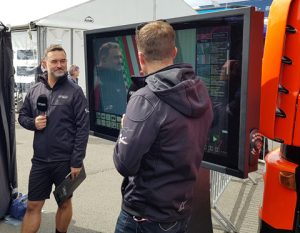 The MotoGP touchscreen analysis tool is a 65 inch all-weather touchscreen powered by RT Software’s tOG 3D. It was constructed by BT Sport’s own engineering department.

In the heart of the Paddock at Silverstone, the screen was put through its paces during the breaks between practice sessions by BT Sport pundit and former World Superbike champion, Neil Hodgson, who used it to explore and explain the finer details of motorcycle racing to the viewing audience.

Hodgson explained: “This is a world’s first in the broadcasting of motorcycle racing; never before has bike coverage had analysis like this. As an ex-rider I can spot tiny little details and intricacies that make all the difference to a race outcome, and using this touchscreen I can explain these to the viewer.”

Hodgson used a variety of tools including magnifiers, area markers and a host of drawing aids to explain quickly and simply how the previous race in Austria was won by the Ducati of Jorge Lorenzo in his battle with Marc Marquez. He then went on to demonstrate the power differential between the Ducati and Honda bikes and show how home favourite Bradley Smith made up five places in the first lap.

Another tool developed by RT Software especially for BT Sport MotoGP allowed Hodgson to show the visibility a MotoGP rider has either side of them through their helmet. Hodgson summarised: “This is a real game changer in our coverage and I am so excited about the extra insight it will allow me to bring to the fans going forward.”

Kevin Brown, series editor of MotoGP for North One Television, which produces the programming on behalf of BT Sport, said: “In line with BT Sport’s ethos we wanted to find ways to really convey the energy and atmosphere of the Moto GP weekend to our viewing audience.”

BT Sport produces a catch-up show on social media every Friday night on a race weekend called ICYMI, social media shorthand for ‘In Case You Missed It’. For Silverstone this was taken to another level, Brown explained: “We wanted to do something that included the fans and really put them at the heart of our insight. We decided to do ICYMI as a live interactive fun show, hosted in the Silverstone Woodlands campsite. As well as catching up with Fridays track action it was a chance to look at the lighter side of the sport and have some fun with our pundits and audience.”

BT Sport presenter Suzi Perry anchored the show from the campsite stage and was joined by numerous guests, whilst pundits Gavin Emmett, Hodgson and Colin Edwards roamed the site, getting stuck into the social activities including pulling pints in the bar, racing on the dodgems, and joining the chilli eating contest.

BT Sport also brought its successful ‘No Filter’ social media series to Silverstone, producing a British MotoGP special which was published on the Saturday morning. Following the success of this content in boxing, UEFA Champions League and Speedway, the show aims to get under the skin of an event and get behind the scenes. The MotoGP edition followed the BT Sport pundits around as they conducted their Thursday pre-race interviews, as well as behind the scenes at the press conference, and the Day of Champions charity event on the Silverstone main stage.

Earlier this year BT Sport extended its relationship with MotoGP rights holder Dorna for another three seasons, extending the deal to the end of 2021. MotoGP fans are able to enjoy every minute of the action across race weekends, with BT Sport broadcasting all 19 Grand Prix’ from around the world. Every practice, qualifying session and race for MotoGP, Moto2 and Moto3 is hosted live from the circuit, making sure fans get the best of the sport over an incredible 20 hours of exclusively live, thrilling coverage across each race weekend.

BT Sport is also showing and profiling the up and coming young talent from the first British Talent Cup (BTC), which began this year and is designed as a stepping-stone for young riders to get onto the world stage. Part of the Road to MotoGP programme, the BTC aims to take talent from the British Isles to the top.