Live from The Open: BBC Sport gets out on the course to tell stories for highlights show

The 87-year old Alliss once more takes his place on the commentary team for the 2018 Open at Carnoustie in Scotland alongside Ken Brown, Andrew Cotter and Maureen Madill, with lead presenter Eilidh Barbour again juggling studio presentation, links out on the course and voiced openings in the edit for TV broadcast. 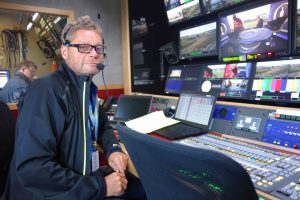 Jonny Bramley in the CTV scanner for BBC Sport at Carnoustie: “For the moment, we’ll be remaining on-site”

Executive Producer Jonny Bramley told SVG Europe, “as the free-to-air partner our remit is to try to appeal not just to golf enthusiasts but also to a wider audience. So we try to ensure that our programmes are not just a succession of golf shots, trying to make them interesting by telling stories and adding items we think will have more appeal, like the ever popular ‘Ken on the Course’ features which explain the game and the course in amusing style.

“Golf is a sport which is ever-evolving, and now VR/AR shot-tracking has become standard and the viewer almost expects it now,” said Bramley. “Golf is very stats-heavy, so there is a wealth of additional information which can be drawn from to enhance the coverage. We are able to take the excellent world feed from European Tour Productions and add our own programme elements.”

On Thursday and Friday the BBC team is set with a challenge of providing a highlights show based on the day’s play – without knowing as the day unfolds, from 06:30 right through to close of play, which players are going to emerge and which stories will resonate the strongest with viewers. The commentary team commentates from 10am until 8pm on the golf as it happens, as the BBC feels the show is better if the commentators react as live, rather than post-dubbing a package recorded earlier.

“We have a ‘half-time’ reaction on Thursday and Friday,” said Bramley, “and then we wrap up and analyse the day’s play in our studio at the end of the day with special guest Paul Lawrie, the 1999 Open Champion here in Carnoustie.”

How does the team tell the story of each day’s play? “I’ll sit in our [CTV-provided] scanner creating a BBC feed from the world feed. That means cueing the commentators at an appropriate point close to the shot itself, making decisions along the way as to what’s likely to make the edit so the commentators can pick up cleanly, adding our own leader boards with music for Eilidh to voice – and adding additional shot graphics if the world feed has shown a graphic much earlier in the shot.

“The edits are carefully planned,” said Bramley. “We have a team of four editors and two EVS operators. One editor will create the openings and features and three will be editing the golf and the EVS ops will be building the programme and replaying the live feed.

“The one addition we have this year is an RF cam, supplied by CTV, so that anything Eilidh does out on the course is available instantly in the edit, rather than waiting for cards to be brought back from an ENG camera.

“The other innovation we’ve been looking at is remote working,” said Bramley. “This is something that lends itself well to some sports, and we’ve had our galleries and post production remote in Salford this year for the Winter Olympics and Commonwealth Games. If you can reduce your costs and on-site footprint while not adversely affecting the quality of the on-air product, then it has to be considered.

“However with golf highlights we would need to increase dramatically the amount of connectivity between the OB and MediaCity; clean and dirty world feeds, interviews, studio cameras, RF cameras, beauty shot etc. And then there’s the reverse feeds too: our own output for the commentators and a separate line for Eilidh voiceovers,” he said.

“Losing that connection as well between the production team and the talent is also a challenge, making workflows more complicated and having a less motivated team. There would also be duplication in resources and staff operating over two sites rather than one. For the moment, we’ll be remaining on-site…”